Renault is poised to revive the 5 nameplate—which adorned the automaker’s bestseller in the 1970s and early 1980s—on a new electric hatchback due in 2024 and previewed by a concept shown in 2021. This year also marks five decades since the Renault 5’s introduction, and the French brand celebrated earlier this year with the quirky but stylish 5 Diamant concept. Now Renault gone even wilder with the R5 Turbo 3E, an electric drift car that reimagines the iconic Renault 5 Turbo rally legend and takes inspiration from retro video games. 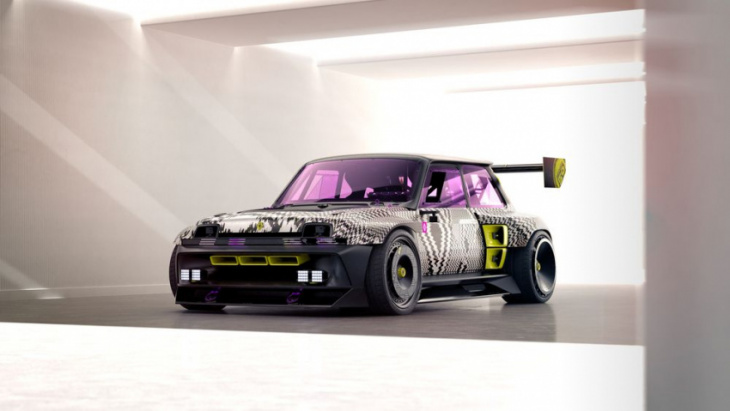 The body shape of the Turbo 3E remains loyal to the original 5 Turbo, but the details have been entirely revised. The mesh side air intakes are replaced by a pair of NACA ducts that pop in a lurid shade of yellow, while a gigantic rear wing sprouts from the hatch and a cavernous diffuser replaces the rear bumper. The headlights and taillights are swapped out for thin LED strips, and four square pixel fog lights are mounted on the front bumper. The front end also includes three rectangular yellow vents and purple tow hooks mounted above a protruding front splitter.

Despite the classic squared-off bodywork, the Turbo 3E is all-electric underneath, with a 42-kWh lithium-ion battery feeding two electric motors, each powering one rear wheel. Total output is 375 horsepower and 516 pound-feet of torque, allowing the psychedelic restomod to hit 62 mph in 3.5 seconds en route to a 124 mph top speed according to Renault. 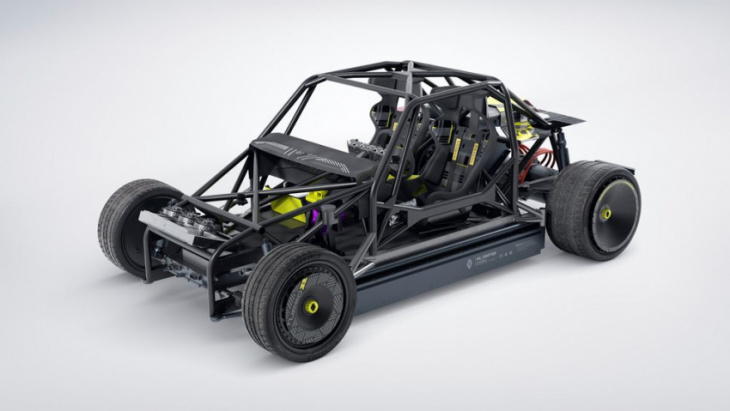 Based around a tubular chassis with an FIA-approved roll cage and fashioned from carbon fiber, the R5 Turbo 3E weighs in at 2161 pounds, with 1146 pounds of that coming from the battery. Renault claims that the battery can provide enough juice for “several laps,” but fails to specify whether those are laps around NASCAR’s half-mile Martinsville Speedway or the nearly 13-mile Nürburgring Nordschleife.

Along with track driving, Renault envisions the Turbo 3E partaking in gymkhana, a time trial competition involving drifting, jumping, and other rally-style maneuvers. The 3E comes with a drift mode, with the 62-mph sprint lasting 3.9 seconds in that setting. The Turbo 3E’s trippy purple and highlighter yellow livery also seems clearly inspired by the drift machines that Ken Block used to make gymkhana popular on YouTube. Renault certainly had internet virality in mind when designing the Turbo 3E, fitting it with 10 mounting points for cameras on the interior and exterior, and the LED lights flash while the car is drifting. 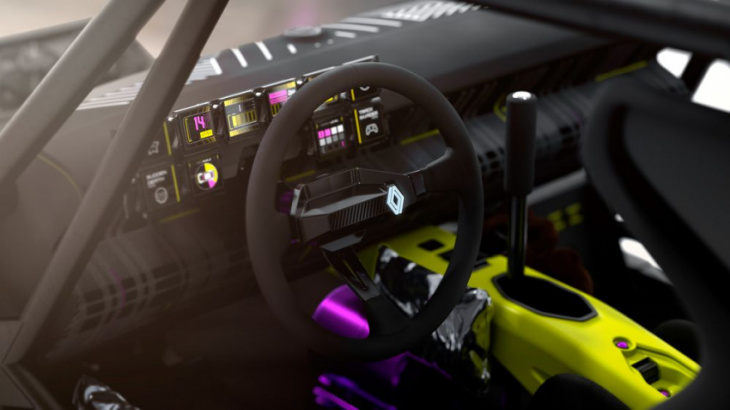 The interior is dotted with more yellow and purple accents, and Renault worked with Sabelt on the carbon fiber bucket seats, safety harnesses, and steering wheel. The handbrake lever stands tall, urging the driver to induce a smokey drift, and the gauge cluster consists of 10 digital screens with video-game-inspired graphics. The floor is fashioned from black cork while the dashboard and door panels are draped in Alcantara. Renault also bizarrely includes a teddy bear named “Drifty” in the cabin, ostensibly to “relax and comfort passengers overwhelmed by the show car’s muscle.”

The R5 Turbo 3E will make its debut at the 2022 Chantilly Arts & Elegance competition on September 25. In typical 2022 fashion, Renault will also issue a collection of NFTs based on the vehicle, but we’re more interested in hopefully seeing the R5 Turbo 3E burn large quantities of rubber in the near future.

The R5 Turbo is back and more ridiculous than ever.

Renault has unveiled their Renault R5 Turbo 3E, hoping to bring a modern electric drivetrain and aggressive modern styling to an old platform. The first thing the average American thinks of when you bring up French products is high class, luxury, and elegance, but the prototype Renault R5 Turbo 3E ...

There was a chance for a higher result, but the car's balance was quite inconsistent.

PARIS: Renault will control 80% of its electric vehicle value chain well ahead of its 2030 target as it develops partnerships in batteries, electric motors and power electronics, its chief executive said today. Luca de Meo said the research and development costs were too high to go it alone ...

Ahead of the reborn R5 road car, Renault’s given us a drift car concept with a giant wing

We teased it last week and here it is, Renault’s 5 Turbo 50th Anniversary blowout, the R5 Turbo 3E, the ‘electronic rebirth of a historic flagship’ that’s ‘born to drift’. That’s right, it’s all electric and it’s a drift car. We can almost hear the anger in the comments. Debuting ...

Renault goes full speed ahead with an electrifying show car

Renault Koleos family SUV future in doubt! Rival to the Nissan X-Trail and Toyota RAV4 to finish up in 2024

Renault desperate to lock in Dacia Duster and Bigster SUVs, and Oroch ute as part of new Adventure range