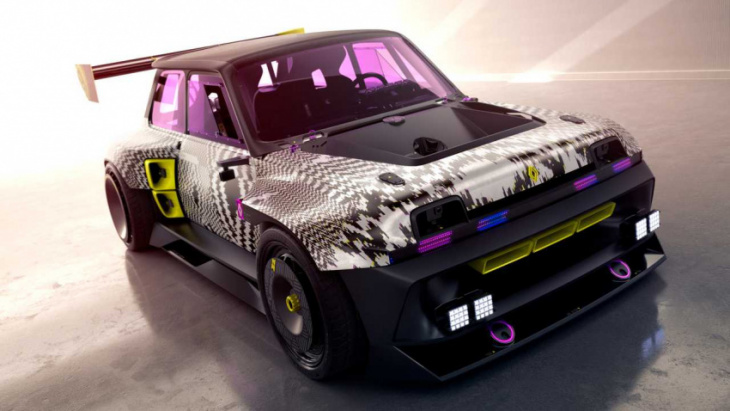 Following in the footsteps of the Renault 5 Turbo and the Turbo 2, the company with the diamond logo is revising the hot hatch for the inevitable electric era. Much like the Porsche Taycan, a car without a combustion engine gets the “Turbo” name, followed here by “3E” to signal it’s the third in the lineage and has an electric drivetrain. Essentially, the concept is a high-performance derivative of the Renault 5 Prototype we saw early last year.

The rad showcar looks just about ready to star in Cyberpunk 2077 and boasts a rear wing you can spot from a mile away. Much like its gasoline-fueled predecessors, the new R5 Turbo 3E has a rear-wheel-drive layout. Renault installed two electric motors – one for each wheel at the back – and put the 42-kWh lithium-ion battery pack in the middle under the floor. Doing so harkens back to the mid-engined layout of the Turbo and Turbo 2.

Technical specifications are just as impressive as the ultra-aggressive styling. The French marque says the pair of electric motors deliver a total of 375 horsepower (280 kilowatts) and 700 Newton-meters (516 pound-feet) of torque. It’s enough muscle for a 0 to 62 mph (100 km/h) in three and a half seconds and a top speed of 124 mph (200 km/h).

Built on a tubular chassis, the electric concept has FIA-approved roll bars and a dedicated Drift Mode, complete with the essential upright handbrake lever. To capture all the action while you’re going sideways, the R5 Turbo 3E has no fewer than 10 mounting brackets for cameras that can be installed both inside and out.

Renault will have the R5 Turbo 3E on display next month at the 2022 Paris Motor Show. While there aren’t any plans to put the concept into production, the company’s performance division Alpine is working on a high-performance derivative of the electric Renault 5.