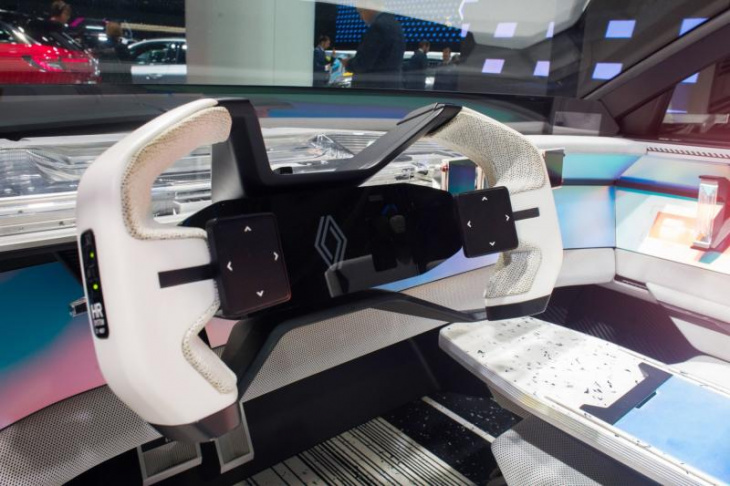 The steering console and dashboard control widgets on the dashboard of a Renault Scenic Vision hybrid concept vehicle on day two of the Paris Motor Show in Paris, France, on Oct 18, 2022. (Photo: Bloomberg)

Renault SA is deepening its collaboration with Alphabet Inc’s Google in a bid to extend capabilities on remote software updates to new models, such as the electric Megane E-Tech and Austral.

“We want to make the car an intelligent object that learns and one that can be upgraded over the air like a mobile phone,” Renault Chief Executive Officer Luca de Meo said in an interview.

Carmakers are scrambling to catch up with Tesla Inc’s tech capabilities, including the ability to deliver updates to cars remotely. Expanding the partnership with Google, which started in 2018, will allow Renault to offer more over-the-air software updates as well as additional on-demand services, the two companies said Tuesday.

De Meo said new in-vehicle digital features will create additional revenue while bolstering the residual value of Renault cars and retain customers. Functions on demand will include drivers being able to locate their cars in large parking lots.

“The product stays in connection with the company from cradle to grave, for more than one ownership cycle,” he said.

The expansion of the partnership with Google shows Renault’s “horizontal” strategy under de Meo, which includes collaborations on software with developers rather than designing the tech in-house — a strategy that has yielded mixed results at other traditional carmakers. Volkswagen AG delayed crucial new models and pushed out ex-Chief Executive Officer Herbert Diess in July amid problems at its Cariad software unit.

“We are a hardware manufacturer; software is another sport,” de Meo said. “If you want to learn to play tennis, you better go with someone who plays proper tennis.”