Caption: Prices for the Renault Trafic have jumped significantly with the arrival of the 2022 facelift, but importer Ateco says its target customer won’t mind one bit.

WHEN an importer makes the decision to hike the price of entry for a mainstay model by nearly ten grand, it is understandable for some observers to equate that to commercial suicide.

However, the news that Renault’s mid-sized Trafic van has jumped from being a $39K proposition to a $48K one is not necessarily a harbinger of bad things for its importer Ateco – rather, it is a deliberate reaction to customer demand and a prioritisation necessitated by tight supply.

Beyond the deletion of the pre-facelift Trafic’s 1.6-litre entry-level engine in favour of the much gruntier 2.0-litre unit across the range, other changes have necessitated the price boost, such as the arrival of standard autonomous emergency braking (AEB) and new in-vehicle technology along with the refreshed interior and exterior..

According to Renault Australia general manager Glen Sealey, interest in the lower reaches of the Trafic line-up was not significant.

“Most of the market request was for the two-litre Premium grade,” he said.

While LDV (which is also imported by Ateco) now enjoys a monopoly on the sub-$40K mid-size van market and a high representation in last-mile delivery fleets, Renault has no interest in pitching the updated Trafic to the goods delivery industry.

Rather, tradies are the Trafic’s target, and those customers are prepared to spend big on their vans.

“Most customers are transacting into the $50,000 region. Trafic caters for the small private business owner. For example, for a man with a mobile coffee van, the fit-out is worth more than the van. For a plumber or electrician, by the time the shelving is in, the roof racks, etc – a fit out can be expensive. They not only spend a lot of time in their van, they also spend a lot of money in terms of the fit-out,” said Mr Sealey.

“For Trafic, that tradie, that worker market is where we want to be. The person who’s going to deliver parcels with the cheapest van they possible can … they’re going to buy a different brand, they’re not going to buy a Renault and we understand that.”

But beyond target demographics and buyer profiles, another imperative is driving Renault’s high-mix Trafic strategy – it makes better use of a limited supply of product.

“The reality is, if you went and priced up a Trafic today in the UK and you saw what it cost versus what we’re selling a Trafic for here, you’ll find that we’re much cheaper (n Australia). So why would they send lots of cars to here? They don’t. I can’t get supply,” explainer Mr Sealey.

It is a claim that stands up. Specifying a UK-spec Trafic Sport dCi 170 manual – the most affordable variant with the 2.0-litre turbo diesel engine – to the same level as the $48,200 (before on-road costs) entry-grade Trafic Pro yields a quoted RRP of £35,325, or $59,979 in Australian dollars at today’s exchange rate. Australian Trafic buyers are indeed getting a decent deal.

Will punters miss having a sub-$40k option? Mr Sealey says it is unlikely, pointing to a sub-20 per cent sales split of the pre-facelift 1.6-litre variants, with the 1.6-litre Trafic Pro SWB manual – the only variant to sit beneath the $40K barrier – accounting for a very minor slice of that.

“Our strength is in that upper end – Trafic is a European van, and we compete more against the Mercedes-Benz Vito and Volkswagen Transporter than we do down the bottom end of the market,” said Mr Sealey.

“The price movement is not going to do anything to (Trafic) volume. It’s all supply driven. Now that might not be the case in two years’ time or even 12 months’ time, but today I cannot get enough Trafics to supply demand. We are genuinely struggling to get enough supply”

First deliveries of the facelifted Renault Trafic range officially begin on the September 20, with the range’s pricing as follows: 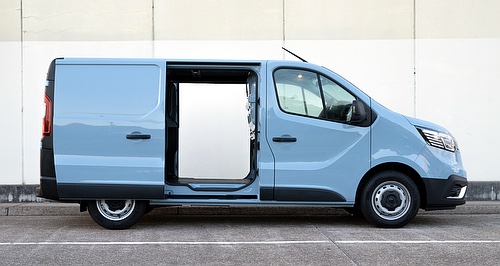 This possibly previews the crossover alternative to the upcoming Renault 5 EV.


View more: Renault 4 Concept Looks Quite Large And Chunky In This Teaser

It has always been interesting to observe the new vehicles we don’t get in the United States. Renault has been responsible for several “forbidden fruit” models over the years, and its latest EV tease may revive another. The French automaker recently teased a new electric crossover that bears a ...