Ahead of the reborn R5 road car, Renault’s given us a drift car concept with a giant wing 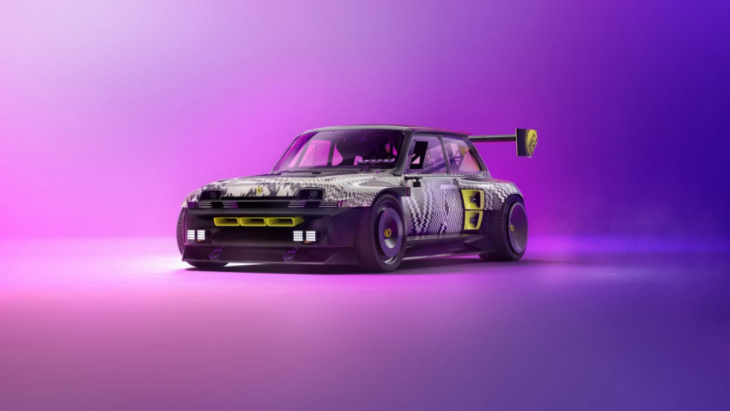 Renault has revealed a wild R5 Turbo-inspired concept car that will help mark the brand’s 50th birthday celebrations for its small car icon. Called the R5 Turbo 3E, it’s been designed to be a tiny electric drift car, replacing the turbocharged petrol engine with a pair of electric motors situated on the rear axle.

Designed under the stewardship of Gilles Vidal, the concept blends a video game-style exaggeration of form with period racing elements to dramatic effect. Despite its digital-only reveal, Renault has built a physical version that’ll be on display at the 2022 Paris motor show.

The R5 Turbo 3E is built on a bespoke tubular steel frame, and wrapped in a carbonfibre body that echoes the original in terms of overall proportion and form. It’s dominated by more aggressive interpretations of the Turbo’s iconic flared arches that sit 250mm wider than the original road car. Both bumpers and sills feature an almost caricatured take on modern aero, dominated by a deep front splitter matched to an oversized rear diffuser. The wing is equally massive, and helps create an aesthetic that wouldn’t look out of place in the next reboot of Bladerunner. 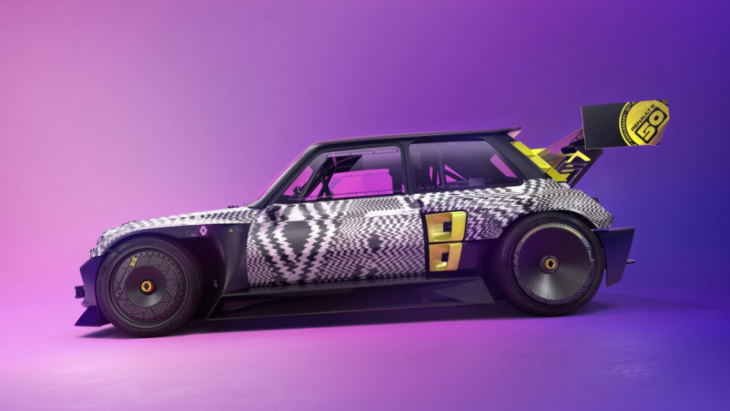 Huge 325-section rear tyres have the job of putting a total of 374bhp to the ground, delivered from two electric motors that power a rear wheel each. This theoretically gives the R5 Turbo 3E concept full torque vectoring, a non-essential element for any drift car if we’re honest. Those two motors draw energy from a 42kWh battery mounted in the centre of the chassis that makes up 520kg of the car’s overall weight, which is rated at 980kg.

> Renault 5 Turbo: review, history and specs of an icon

Like the rest of the car, the cabin is motorsport-inspired with a concept car edge, highlighted by two Sabelt racing seats, upholstered dash and modular display.

This type of electric racer concept isn't one without precedence, with Ford debuting its latest Supervan and Hyundai stunning crowds with its Vision 74. It's an exercise that might not be particularly relevant, they're ceratinly crowd pleasers.

Of course, the Turbo 3E doesn’t preview much of what we might see in a future production car, but as a window into the tone that Renault will take with its new electric R5 road car and its high performance derivatives, it’s a good start.