Endlessly entertaining automotive destruction with a 'unique' set of characters… 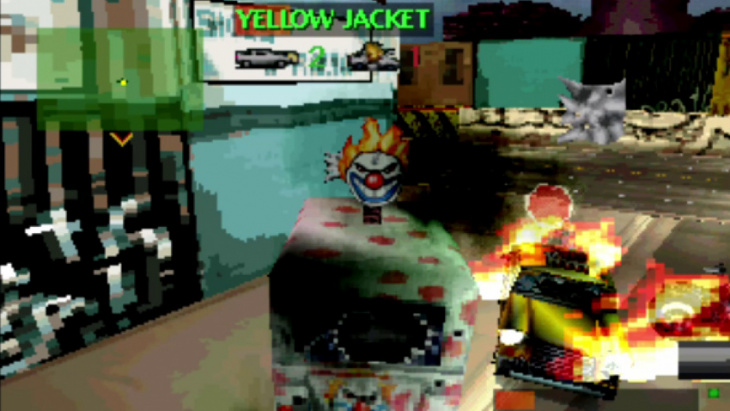 Twisted Metal was released for the original PlayStation console mere weeks after Destruction Derby, but rather than relying on anything as rudimentary as head-on collisions, this car combat game featured vehicles bristling with more weaponry than an Apache gunship.

With a plot that sounds like a straight-to-DVD Saw spin-off, Twisted Metal takes place in the far-flung future year of 2005, where a mysterious figure named Calypso, who lives beneath the streets of LA, organises a deadly vehicular combat tournament. What that means in practice is driving around in circles, peppering each other with rockets and machine gun fire in a sort of clumsy, ultra-violent automotive ballet.

Endlessly entertaining in split-screen multiplayer, it was the cast of bizarre, horror movie characters that gave Twisted Metal its unique flavour. Your options for each deathmatch included a sort of murderous Mr Whippy in an ice cream van, a maudlin ghost in a Corvette C2 or, best of all, the literal Grim Reaper riding around on a motorbike. We had no idea he was quite so ‘hands on’.

With such a fantastical cast of characters, it’s perhaps surprising that the levels themselves were a relatively conventional tour of urban and suburban Los Angeles. It’s only the final arena that truly stands out, a rooftop level which had you hopping between skyscrapers long before Fast and Furious 7 made it cool.

A cult favourite, Twisted Metal spawned several sequels and spin-offs, including the deliciously dark Twisted Metal Black on PS2, but after a lacklustre response to the PS3 reboot in 2012, there’s been absolutely zip since. Which is doubly a shame, because in addition to being a classic videogame series, we find a well-placed homing missile to an enemy car’s exhaust pipe to be extremely effective therapy for lingering road rage…