A futuristic sci-fi racer set to proper rock classics. What more did we need in 1993? 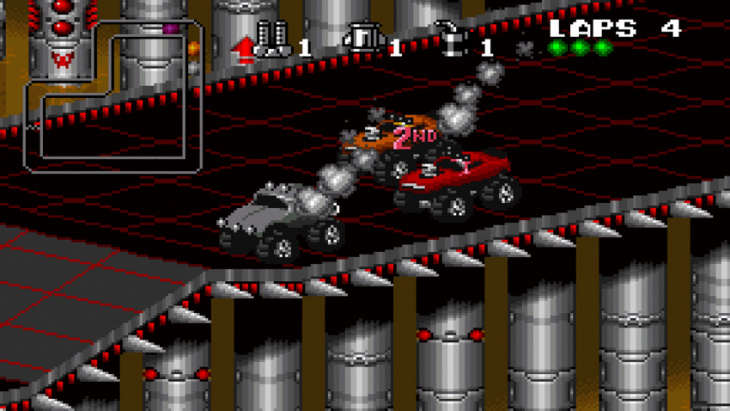 With modern games like Forza Horizon 5 containing hours of carefully curated, genre-spanning music, it’s easy to forget that racers in the Nineties usually had a bunch of unrecognisable bleeping and blooping to accompany your thrilling, wheel-to-wheel battles. Not so with 1993’s Rock n’ Roll Racing, where as soon as you fired up the game you were treated to a flatulent rendition of “Bad to the Bone” by George Thorogood and the Destroyers.

That’s just one track on a playlist that also includes Deep Purple, Steppenwolf and Black Sabbath, ensuring that, at the very least, Rock n’ Roll Racing was never in danger of being reported to trading standards. Fortunately the racing was also present and correct, imagining a future where galactic conflict is settled in jacked up, heavily armed sci-fi buggies. Less Star Wars, more Car Wars.

The novel isometric camera angle allowed for circuits with proper elevation, meaning jumps, dips and the ever present threat of accidentally leaping over the guard rail and into the abyss. The biggest danger though, was the other three heavily armed alien competitors that had their missiles, mines and energy weapons trained on your exhaust pipe’s heat signature.

The game even fostered animosity in the real world. In the two-player mode if you earned enough points to advance to the next division and your mate didn’t, you got the option to “leave your loser friend behind” and continue alone. Exactly the sort of betrayal that would be unearthed by an expensive therapy session 30 years later.

Rock n’ Roll Racing was an entertaining racer that, it being the Nineties, was almost certainly described as having ‘attitude’. The only downer is that after releasing an instant classic the developers never applied this successful format to other genres of music. Smooth jazz racing anyone? No?