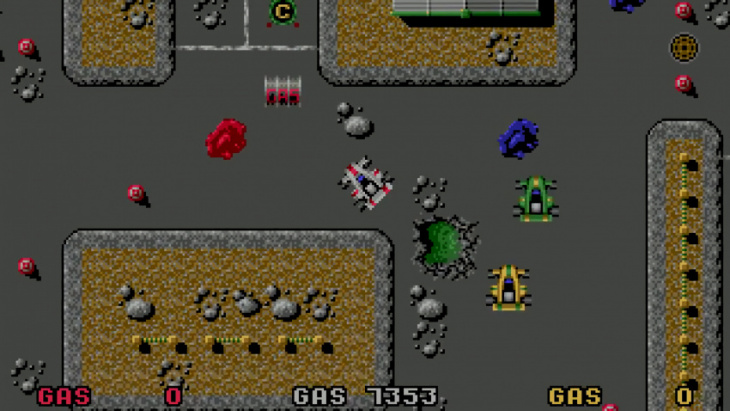 Back in the 16-bit home computer era, there wasn’t a whole lot of pressure for top-down arcade racing games to justify their existence. As long as the track was clearly demarcated and you could successfully identify which handful of pixels was supposed to be your car, you were away.

That’s why we appreciated Nitro’s heroic efforts to tell a cautionary Cold War fable about the dissolution of society via the medium of razzing tiny pixelated cars around. Nitro’s races take place on mostly abandoned streets in a bleak future and the three player characters are neat, cyborgised takes on Clint Eastwood, Rambo and Roger Moore-era James Bond. Clearly the copyright lawyers were first up against the wall when the revolution came.

Reach the final series of races and it’s evident that the bombs have dropped, with the loading screen showing a single human figure picked out against the blinding thermonuclear flash. Reassuringly, along with the cockroaches and billionaire doomsday preppers, motor racing has survived, albeit in a fractured, toxic environment. It’s poignant and tragic seeing the race route peppered with puddles of human blood. Not nearly as tragic as if you hit one of the puddles, it slows you down momentarily and you lose the race though, obviously.

In keeping with the theme of societal collapse, game over comes not when you fail to place high enough in a given event, but instead when you run out of your constantly depleting supply of gas. Finishing first gives you a welcome top up, but you’ll also need to pick up barrels of petrol along the way. It’s a bit like the recent fuel ‘crisis’, except you’re colliding with power-ups at high speed instead of queueing miserably for three hours outside a Texaco. Suddenly the apocalypse doesn’t sound so bad…