The greatest arcade racer of all time? We certainly think so. Here's why 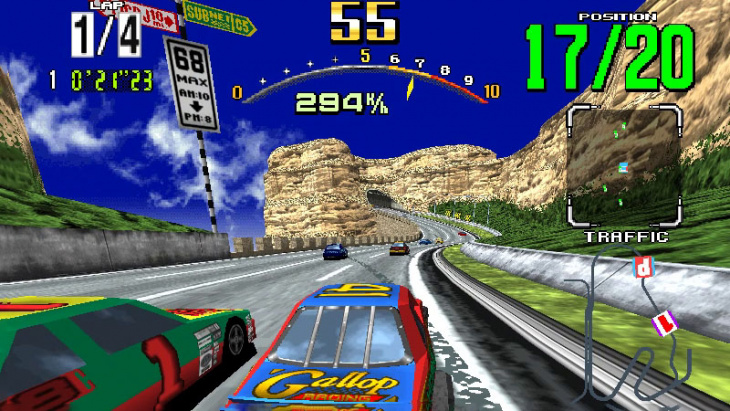 For our money, Daytona USA is the greatest arcade racing game of all time. And by ‘our money’, we mean specifically the small fortune in pound coins that we pumped into this spectacular sit-down cabinet in the seafront arcades of our youth. Time was that every coastal town from Bognor to Blackpool had a full multiplayer Daytona USA set-up, allowing you and seven mates to thunder around stripping the paint from each other’s stock cars.

With your face pressed up against a 25-inch screen, the sweeping, swooping circuits were a technicolour rollercoaster ride and force feedback steering threatened to yank your pre-pubescent noodle arms clean out of their sockets. The secret genius of Daytona’s multiplayer, though, was that the game subtly slowed down the leaders and offered a speed boost to trailing cars, to ensure a satisfying race-long battle for even your most hapless mates.

Of course, if you really wanted to show off, you’d spend the time and the pocket money to master the four-speed H-pattern gearshift and the game’s unique drifting mechanic. Jamming the gearstick into first or second on corner entry pitched the car into a dramatic slide, then shifting back into third or fourth would fire you back out of the turn. For the avoidance of doubt, this is not something to try in your Ford Fiesta unless you want to launch your piston rings into space.

While the game was released in downgraded form for Sega’s own now mostly forgotten Saturn console, we had to wait until 2011 for a home version on Xbox and PS3 that captured the true majesty of the original arcade game. Better yet it came complete with online multiplayer for you to settle those old scores. The only thing that’s missing is the lingering smell of fish and chips…