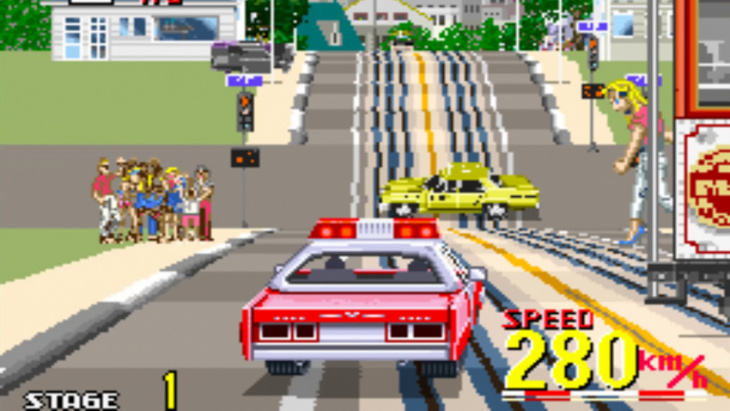 The world of videogames is littered with examples of misuse of police budget, but arcade game Cisco Heat: All American Police Car Race has to be among the most taxpayer troubling. That’s because it takes place during what’s known as the National Championship Police Car Steeplechase, an irresponsible high-speed rally through the streets of San Francisco. If you’re planning to rob a bank, it might be a good idea to pick the day when all the cops are distracted by their legal illegal street race.

Your era-appropriate choice of squad car is between a classic Cadillac Brougham with its 5.0-litre V8 engine and breezeblock styling or a rather more nippy turbocharged Nissan 300ZX Z32, though once you’re in-game there’s little practical difference between the two. Far more important to your success is how you handle the dramatic 90 degree corners that made negotiating the streets of San Fran uniquely challenging. Though not quite as challenging as holding onto your lunch as you lurch up and down the undulating hill sections.

At the very least, the streets are mercifully devoid of civilian traffic, but regardless you’ll be using the siren and lighting up the cherries throughout. What’s more, even though your competition in the race is entirely constituted of other police cars, for some reason they’ll leap conveniently out of the way when you mash the button in the centre of the steering wheel and add your airhorn to the cacophony.

Considering the technology available in 1990, Cisco Heat did an impressive job of recreating San Francisco and its landmarks, kicking off the action on the Golden Gate Bridge, haring along Fisherman’s Wharf, up to the Twin Peaks and finally arriving at the finish on Treasure Island. Though given the fact that even the ending sequence admits that you’ve broken ‘every law in the books’ on the way to victory, perhaps a more appropriate finishing line would have been Alcatraz…