Red Bull team principal Christian Horner described its Belgian Grand Prix supremacy as “one of the most dominant performances” it has produced since its glory years when it won four drivers’ and constructors’ championship doubles from 2010-2013.

Max Verstappen came through from 14th on the grid to win, backed up by team-mate Sergio Perez in second place, with Red Bull enjoying a significant pace advantage.

Horner was surprised how quickly Verstappen came through to the lead, taking control of the race by overtaking race leader Carlos Sainz’s Ferrari on lap 18. The Red Bull was comfortably the fastest car around Spa in 2022 both on qualifying and race pace, allowing it to dominate despite Verstappen starting on the seventh row thanks to power unit penalties that cost him pole position.

“Max had to navigate his way through the pack and he did so very efficiently over the first couple of laps,” said Horner.

“He hit the front far quicker than we could have expected, and the soft tyre seemed to work very well for him in that first stint.

“Thereafter, the pace we had with Max and Checo was enough to easily pass Carlos and bring home probably one of the most dominant performances that we have had as a team since either 2010, 2013.

“It is right up with that period and I don’t think we have ever won a race starting from 14th on the grid.”

Horner is right that Red Bull has never won from as low as 14th on the grid before. Its previous lowest starting slots were 10th for Verstappen’s win in the preceding race at the Hungaroring and Daniel Ricciardo’s Azerbaijan triumph (pictured below) in 2017. 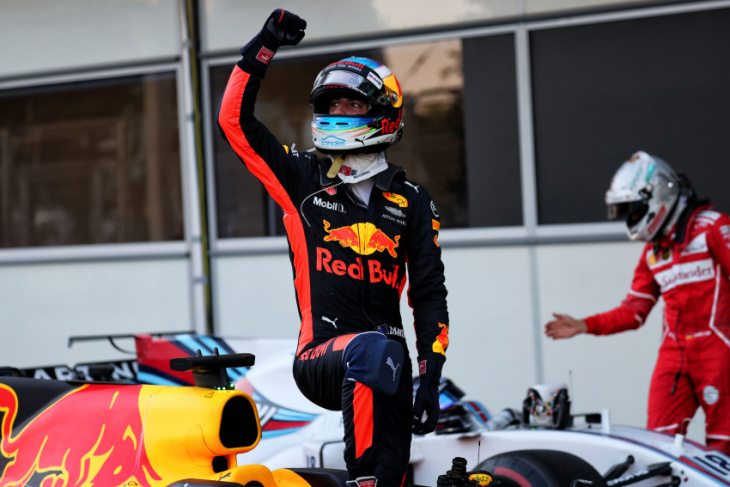 Disregarding the anomalous points-paying Indianapolis 500s of 1950-1960, a world championship race has only been won from 14th on the grid or lower 13 times. The most famous example is John Watson’s triumph from 22nd at Long Beach in 1983.

In terms of dominance at Spa, where Red bull has now won five times, 2022 eclipses Red Bull’s previous most dominant weekend at the circuit. In 2011, Sebastian Vettel led home Mark Webber for a one-two in a race best remembered for the serious tyre concerns.

Red Bull chief technical officer Adrian Newey described it as “one of the scariest races I’ve been involved in” thanks to the team running a fraction over the maximum-recommended four degrees of camber. This created the risk of a failure where the sidewall meets the tread.

That year, Vettel’s pole position time was 0.432s quicker than nearest challenger, McLaren driver Lewis Hamilton. In 2022, Verstappen was 0.632s ahead of Sainz’s Ferrari in qualifying, a gap that potentially could have been even bigger had he attempted a second Q3 run. And while Red Bull led from the front in 2011, Verstappen was able to come through from the seventh row – something that year’s Red Bull RB7 would have struggled to do given straightline speed was not a strength.

Ferrari had suspected before the race that Red Bull’s race-pace advantage wouldn’t be as pronounced as it was in qualifying.

But that didn’t prove to be the case, with Horner describing Verstappen as “in a league of his own” – comprehensively outpacing even Perez. 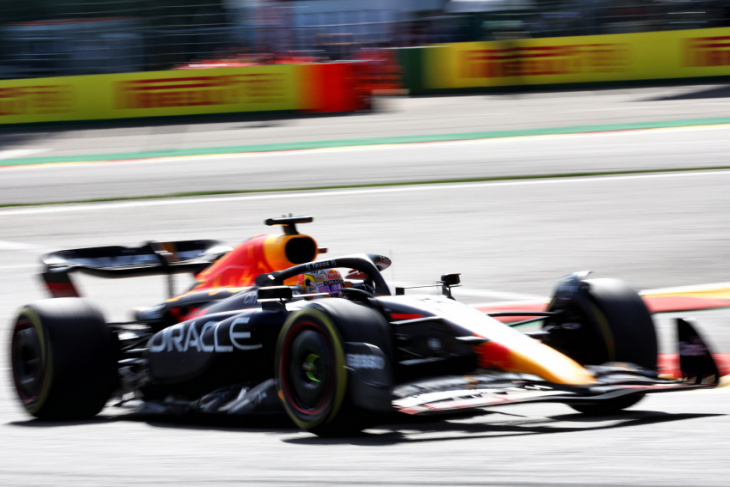 “When you look at pre-race plots, it looked like by the last pitstop we could be somewhere around the podium, but to be fighting for the lead by lap 18 was beyond any of our predictions,” said Horner.

“It is always difficult to anticipate but the performance advantage we saw in qualifying carried through into the race.”

With Verstappen and Red Bull now almost certain to win the drivers’ and constructors’ championships – taking the team’s combined total to 11 – the question is whether that dominance can continue.

Verstappen has nine wins and with eight races remaining could break the record for wins in a season. This is currently shared by Vettel (2013) and Michael Schumacher (2004) with 13 wins. The record for team victories in a season, 19 set by Mercedes in 2016, is unmatchable for Red Bull this year.

Red Bull’s form is certainly ominous for the rest given the apparent nonchalance with which Verstappen won from the seventh row of the grid.

As Horner says it really does feel like Red Bull is rolling back the years to its glory years. And having already won the drivers’ title with Verstappen last year and got one hand on this year’s titles, perhaps this is an indicator that this period could go down as Red Bull’s second glory years.