Red Bull jokes to Mercedes: ‘Thanks for the rule changes’ 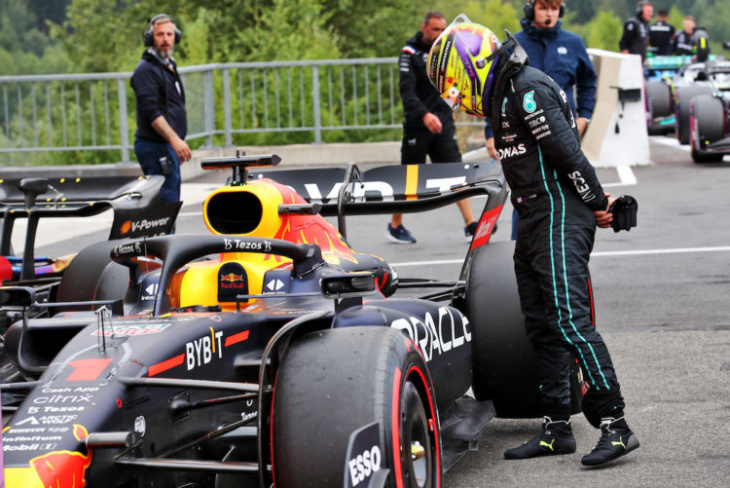 Red Bull has ‘thanked’ Mercedes following the introduction of the Technical Directive to address porpoising at the Belgian Grand Prix last weekend.

Porpoising was a prominent issue early in the season, with the FIA enforcing measures from Spa-Francorchamps to decrease its severity.

The directive caused split opinions, as some teams lobbied for its introduction more than others.

Red Bull, who was against such changes, enjoyed a dominant run in Belgium, scoring a one-two finish with Max Verstappen and Sergio Perez.

Such was the Milton Keynes-based squad’s performance deficit, Verstappen started the race from 14th on the grid, but won by almost 18 seconds.

Did Verstappen unravel Leclerc’s race with visor tear off?

Mercedes meanwhile, was a team that heavily looked for FIA intervention over porpoising, as it struggled in the early stages of the season with bouncing.

Following its introduction in Spa, the reigning Constructors’ Champions ended Saturday’s qualifying session 1.8 seconds down on pole position, while in the race, it finished fourth with George Russell.

Lewis Hamilton retired on the opening lap after making contact with Fernando Alonso.

After Sunday’s race, Wolff described the gap to Red Bull as “just too big”, with the energy drink-backed squad ‘thanking’ Mercedes for pushing for the directive’s introduction.

“On the face of it I’d probably have to thank Toto for the TD! In all seriousness, I think this circuit has played to our strengths,” said Red Bull team boss Christian Horner.

“We have a very efficient car, we’ve found a very good setup and Max has just been in phenomenal form the very first lap in first practice.

“Obviously, strategically we chose to take the penalty here and 14th became 13th technically as the starting point with everybody else.

“But of course Max still had to navigate his way through the pack and he did that very efficiently over the first couple of laps, so he hit the front far quicker than we could have ever expected and the soft tyre seemed to work for him as well in that stint.

“Thereafter the pace we had with Max and Checo was enough that he got past Carlos and bring home one of the most dominant performances that we’ve had as a team since either 2010 or 2013.”

“Maybe we will have to change something about the chassis because of Toto’s new guidelines,” he said.  “They worked very well this weekend! We thank him. It seems that Mercedes have fallen back even further!”

Keyword: Red Bull jokes to Mercedes: ‘Thanks for the rule changes’

BERLIN (Reuters) – Daimler Truck has begun producing Mercedes-Benz branded trucks in China, with the first vehicles rolling off production lines at its joint plant with China’s Foton Motor Co in Beijing on Friday, the truck and bus maker said. China is the world’s biggest market for heavy trucks, ...