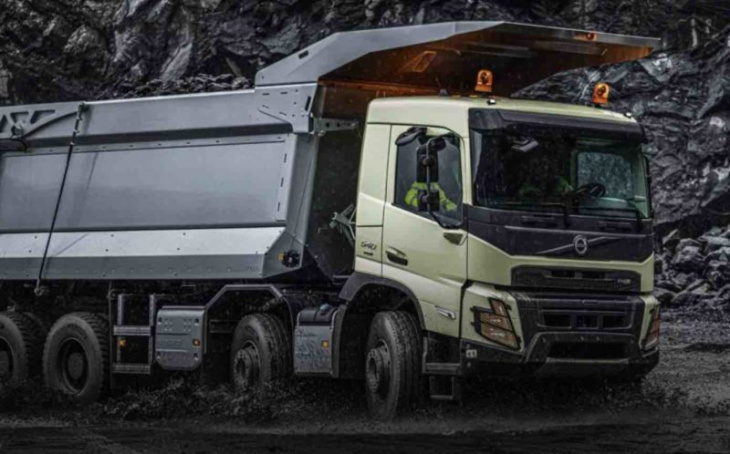 It is clear from the response to stories we have written about heavy duty electric trucks that there are many misconceptions about the way they can operate and what they can do.

There is an complete obsession with range, and the assumption that unless they can go 600kms without stopping for a recharge, they are not much use for anything.

The early adopters of heavy duty electric trucks are, however, turning these misconceptions on their head, and a European  company Rockwool – which specialises in transforming volcanic rock into stone wool – a type of industrial insulation – has provided an interesting example.

They have been using an early version of the Volvo FM heavy duty electric, one of the heavy duty electrics that have just started series production in Gothenburg, and which a group of Australian journalists got to drive last week.

This electric truck has a load capacity of up to 44 tonnes, and range of 300kms. In the application used by Rockwool, the range didn’t matter. It has been operating 24/7, through three different shifts, without any downtime, shifting large amounts of rock from its operations within a Norwegian city.

The reason the electric truck can do this is simple. It has a 540kWh battery, and it’s running on a 14km loop ferrying goods between the distribution centre and its destination. It uses 1.4kWh each kilometre and every time it comes back to base to be loaded, it uses the opportunity to charge up at the same time – on a relatively small 40kW charger.

According to Kjetal Bergflodt, the head of alternative drivelines at Volvo Norway, that meant that it could pretty much replace the electricity it used after each loop while it was loading. Its state of charge never fell below 50 per cent. The truck could keep on going without any breaks in deliveries or shifts.

“That was an eye opener,” he says. He admits it is not really necessary to charge the truck up at the end of each shift – it would probably be just as easier to use a bigger and faster charger between shifts. “But it showed it could be done,” he said.

And there were other benefits too. Not just for the drivers who enjoyed quieter and more relaxing working conditions, but also for the local residents, who were no longer woken by diesel trucks passing by up to 30 times a day.

“These trucks will make a difference to the drivers and to the people living there,” he says. The trial was so successful that Rockwool has put in an order for two heavy duty electric trucks.

Bergflodt says the significant of this is that most trucks don’t do that much travel. “Range doesn’t matter so much,” he says. Around 60 per cent of the transport in Norway is less than 300 kilometres, which is within the range of its new range of heavy duty electric trucks. But it is enough to cover much of the market.

And, with the help of Norwegian government subsidies, which cover 40 per cent of the additional cost of the electric vehicle, it delivered a six year pay back on a truck doing 100,000kms a year.

The author travelled to Sweden and Norway as a guest of Volvo Trucks.