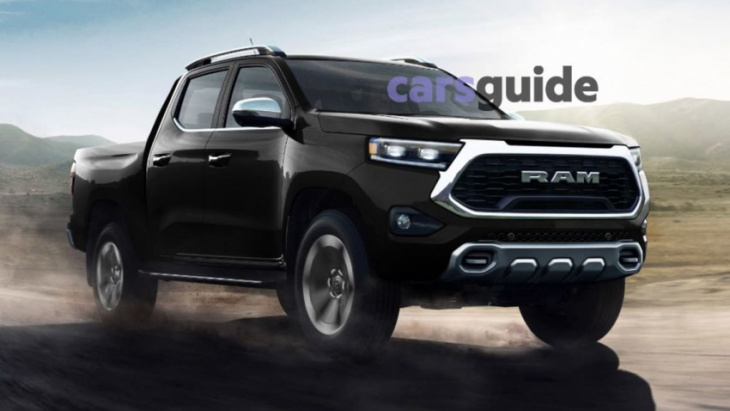 Ram’s new mid-size ute offering has been spied testing for the first time, with the Toyota HiLux and Ford Ranger-sized pick-up inching ever closer to its official reveal.

Spotted testing in Brazil, the prototype also appears to dispel rumours the ute could be sized to take on smaller truck models like the Ford Maverick or Hyundai Santa Cruz, with the Dakota – or 1200 – appearing ready to enter the mid-size market, where it will meet not just Toyota and Ford, but also models like the Nissan Navara, the Mitsubishi Triton and the VW Amarok.

Brazilian auto site Autos Segredos has the scoop, with a reader sending in video of the truck taking on traffic. But it remains early days, with the site reporting the ute won’t actually launch until the end of 2023.

When it does, reports point to the Dakota being offered with a choice between two engines –one petrol, one diesel, with the latter being of most interest to us in Australia.

According to South American reports, the Dakota, or 1200, will be fitted with a 2.2-litre turbo-diesel four-cylinder engine, which should produce around 151kW and 440Nm. The engine will pair with a nine-speed automatic transmission and send power to all four wheels.

Those outputs would underwhelm, especially when up against title-fighters like the Toyota HiLux and Ford Ranger, but we can still hope that Stellantis’ new 3.0-litre twin-turbo inline six petrol engine – part of a new Hurricane engine family – will find its way to the Dakota in some markets.

In standard guise, you can expect around 300kW and 610Nm. But in High Output? Hold onto your hats, because the new donk is expected to target 375kW and 645Nm. That would be enough to haunt the new 3.0-litre twin-turbo V6 in our Ford Ranger Raptor, which delivers 292kW and 583Nm.

For now, though, the Brazilian site suggests the petrol option in the new ute will be a 2.0-litre turbo-petrol good for around 190kW – though it’s also expected to be set up for electrification, either immediately or further down the track, which would unlock more performance.

Either way, Ram’s long-awaited mid-size ute rival to the Toyota HiLux and Ford Ranger is close to reality, with the brand working on a concept to show its US dealers ahead of an anticipated 2023 or 2024 launch.

“We’ve always said we know that on a global basis, probably the biggest area, the biggest white space opportunity for our brand to grow, has been the mid-size pick-up,” Ram CEO Mike Koval Jr told Automotive News.

“We’re looking at it, believe me, I am. We’ll see, but I am thinking about bringing it and giving our dealers a sneak peek.”