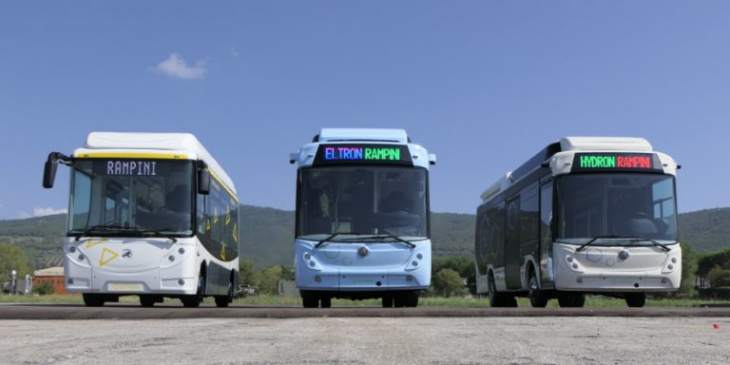 Rampini’s hydrogen fuel cell bus Hydron is eight metres long and offers space for up to 48 passengers with a range of 450 kilometres. The hydrogen tanks can store up to 10.8 kilogrammes of H2, which corresponds to a consumption of 2.4 kg/100km.

The fuel cell itself has an output of only 30 kW, but the drive unit installed in the rear axle has a peak output of up to 230 kW. The body of the Hydron bus is 2.20 metres wide and is available with two or three doors, as well as an area for people with limited mobility. The company says that the study and development work on this model has taken ten years.

Rampini specialises in smaller buses, and here the Hydron fuel cell bus is considerably smaller than the standard twelve-metre solo buses. The manufacturer has also presented two smaller purely battery-electric buses. The 6-metre Sixtron bus is designed for use in small historical city centres, while the other new model, the Eltron, is the further development of the model E80, the first electric bus built by Rampini.

The Eltron has the same key data as the Hydron, with a length of eight metres, a width of 2.20 metres, a capacity of up to 48 passengers and a two- or three-door body. While the company has given the range as around 300 kilometres, it has not yet revealed any further technical data. The six-metre-long Sixtron is supposed to be able to transport 31 passengers up to 250 kilometres. Again, there should be more technical data when it makes its debut at the Next Mobility Exhibition in Milan from 12 to 14 October 2022.

The Italian bus maker says that both the Sixtron and Eltron electric buses can also be equipped with pantographs enabling charging by connecting to the catenaries of existing tram lines.

Back in 2017, Rampini was tasked with producing seven electric buses for the Austrian public transportation network. The 12-meter buses were put into use in 2018 on the 4A Line. In 2019, electric bus manufacturers Rampini and CaetanoBus agreed to include each other’s models in their own respective ranges. In 2020, we wrote about Rampini with reference to Siemens begin contracted to provide infrastructure in Genoa, where the public transport operator AMT chose the E80 from Rampini because the vehicles were the only electric buses in Europe that were agile enough for use in the historic centre of the city.

“A few years ago we made a precise and, for the time, counter-cultural choice: not to build diesel buses anymore,” said Fabio Magnoni, general manager of Rampini S.p.A. “Being sustainable, in fact, is not only a competitive factor, but it is a way to be able to exist in the market and look with confidence to the future of an industrial production, which we also contributed to being appreciated throughout Europe.”

What do you get when you put a luggage maker and a mount maker in the same room? Tank bags apparently!

Lamborghini this week replaced its Urus with an updated version dubbed the Urus S. There’s new styling in combination with extra power, and buyers also have a longer list of personalzation options to choose from. 2023 BMW XM BMW launched a rival to the Urus in the form of ...

Off-road protection Engine upgrades Custom interior Rambler Vehicles 79 Series specs Brad Russell, the owner of this neat-as-a-pin Midnight Blue 79 Series LandCruiser, is a bit of an adventurer it seems. He’s worked in the four-wheel drive industry for more than 20 years, has travelled all over Australia, owning ...

Carmakers chose between spending big on NFL placements or spending less on other programming, according to iSpot.tv.