Problem alert, the Ford Bronco might need a lifeguard on duty because three models drowned in a fairly deep mud puddle. It seems like the new Ford Bronco is having trouble facing submerged sections of the trail resulting in alternator trouble and misfires.

How much water can the Ford Bronco ford?

The Ford Bronco can ford water up to 23.6 inches deep when equipped with the available off-road tires. But 32-inch, 33-inch, and 35-inch all-terrain tires are available. Plus, the Bronco Raptor rides on 37-inch tires.

Also, the Ford Bronco Everglades can ford up to 36.4 inches of water. So, pay attention to your rig and don’t push its limits. Determine how deep the water is before attempting to cross.

While some Broncos were out on a meet-up, some models crossed a massive mud puddle without any issues. But for some reason, thee of the Bronco models got stuck. They had to be towed out.

You can see one Bronco charge into the water pretty quickly. He may have gone too fast as the Bronco took a nose dive, and the engine cut off. It wouldn’t restart and got towed out.

Then the driver tried to start the engine on dry land, which could be dangerous. Water could have been in the engine, transmission, or fuel system. But after clearing the air intake, he was able to drive off.

Do Broncos have alternator issues? 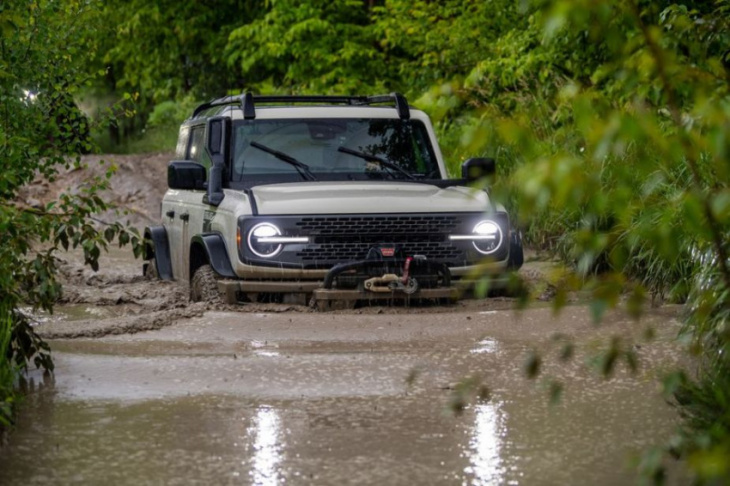 Two of the Ford Bronco models that didn’t make it through the water were equipped with the 2.7-liter V6 engine with 310 hp and 400 lb-ft of torque. After cleaning and drying the air box, they went on their way.

However, some people say that the air box is placed in a terrible position under the hood. Also, the Broncos were filled with water and needed to be drained and hosed out. Does this mean the seals aren’t up to par?

Another Bronco equipped with the 2.3-liter four-cylinder engine with up to 300 hp and 325 lb-ft of torque started to struggle. It was parked for an hour and then started misfiring. The battery levels kept dropping, and it had to be towed away with a trailer.

There are a few reports of alternators going bad with as little as 5,000 miles on the odometer. But it should make it to 100k miles before needing to be replaced or repaired.

According to Wheels Joint, the alternator can get submerged in water. If that happens, you may need to take it out and clean it. Make sure it’s free from any debris. Then check your battery. The terminals should be clean and connected.

Why are the Bronco Everglade models better for water fording?

The Ford Bronco Everglades is ready to get wet because it’s equipped with an air-intake snorkel. Plus, the axles, transmission, and transfer case have raised vent tubes. It’s much better for keeping crucial components clean and dry.

It rides on 35-inch tires and has vinyl upholstery that’s easy to wash out. It comes with a winch and a heavy-duty front bumper, so you’re well equipped to help your friends if they get stuck.

Other than that, it shared a lot of components with the Bronco Sasquatch, such as the lifted suspension and locking electronic differentials.

We will keep an eye on the Bronco to see if it has alternator issues that need to be addressed. But the Bronco may have drowned due to driver errors.

Where Does the 2023 Ford Bronco Sport Fit in Its Vehicle Segment?