You never saw this coming did you? More than 10 years after the Renault-powered was discontinued, we are now seeing the beginning of a new chapter that could see Renault engines coming back to Proton.

Renault and Geely has signed an agreement yesterday to setup a 50-50 joint venture to build and supply combustion engines (including hybrids) to brands under the Renault and Geely group, as well as to other manufacturers worldwide. 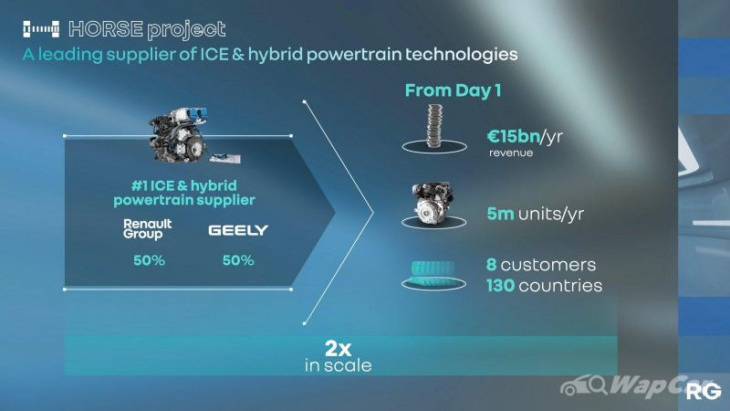 The yet-to-be-named new company is said to be based in London. 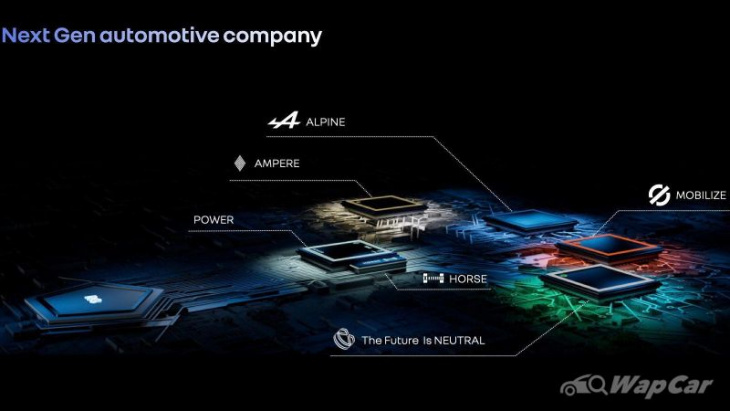 The move is part of Renault’s organizational restructuring that will see the French automotive icon splitting its business into 5 divisions – Power for combustion engine products; Ampere for EVs and software; Alpine for sports cars; Mobilize for financing and mobility services; The Future is Neutral for recycling.

The Power division will be responsible for the Horse project, which aims to pivot Renault into the engine supply business. Renault says Horse has the potential to cover 80 percent of the world’s combustion engine needs. 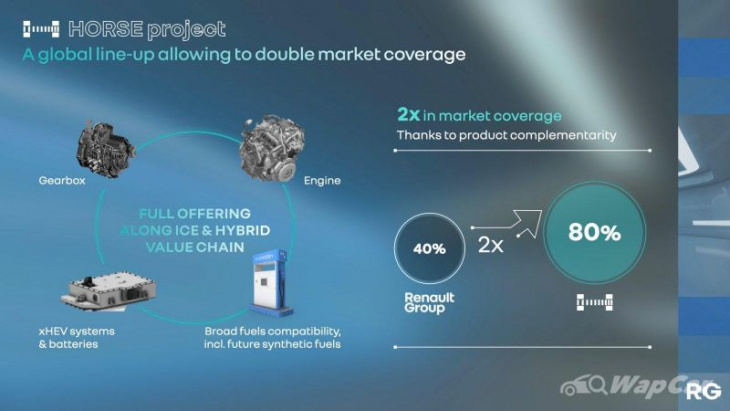 Renault is also looking for a separate listing of Ampere at the Euronext Paris stock exchange next year. Ampere will operate independently of Renault’s other combustion engine products business.

The latest agreement comes following Renault Korea’s partnership with Geely, which will see the latter supplying hybrid engines to Renault models in Korea. 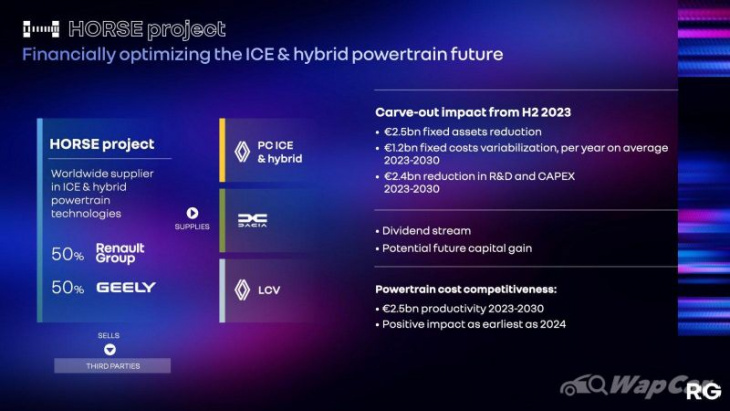 Although Geely’s subsidiary Volvo has committed itself to becoming an EV-only company by 2030, it is quietly maintaining back-up plan, in case it needs to make a U-turn.

Volvo Car controls 33 percent of Aurobay, which has been tasked to push its ‘dirty’ combustion engines to other manufacturers and Volvo will only relinquish its stakes once it is convinced that EVs have become mainstream. 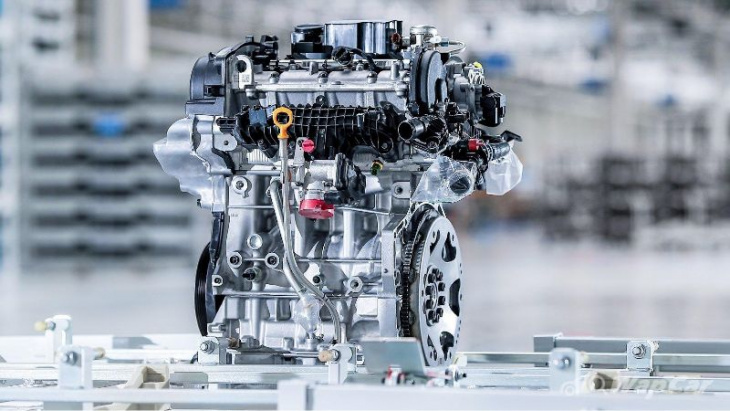 The Geely group is pushing for a consolidation of combustion engine assets. Although EVs will gain prominence, Geely doesn’t believe in predictions of an EV-only future, neither does Renault, hence the foundation of this partnership.

Even though Renault is Europe’s pioneer for affordable EVs (with its Zoe), Renault CEO Luca de Meo has said that EV prices are not coming down as predicted, and he doesn’t believe that EVs can match prices of combustion engine cars.

At the same time, consolidation of the combustion engine business is necessary to free up resources to develop EVs, which will be necessary in European markets. 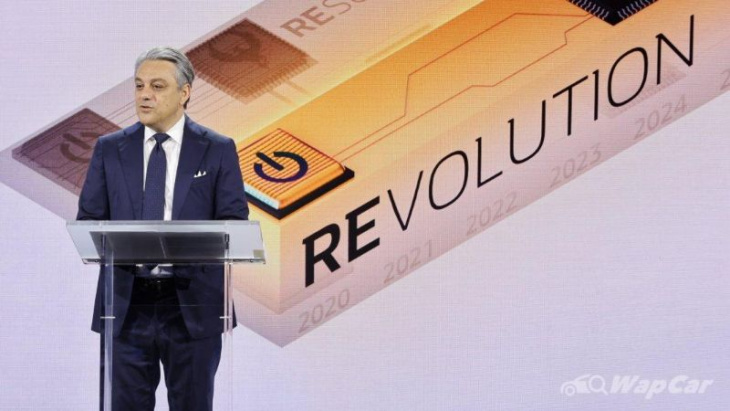 Luca de Meo, CEO Renault Group said, “As Renault Group accelerates with its Renaulution transformation to capture value on the entire new automotive value chain, we are pleased to have agreed plans for an ambitious partnership with Geely to keep developing the ICE and hybrid engine technologies that will remain a critical part of the automotive supply chain for decades to come. We’ll be able to offer best-in-class powertrain and electrified solutions to multiple OEM brands worldwide, unleashing the market potential for this low emission technology.” 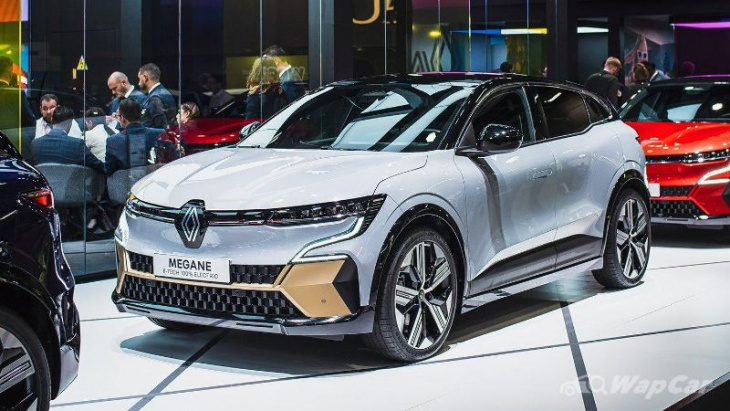 Nissan will of course want to have a say in the matter, because some of the intellectual property used in the engine(s) design belong to them, but Renault’s direction for the future is clear – it no longer wants deeper integration into Nissan, so it will work towards a settlement with Nissan.

The Renault-Geely partnership will have a capacity of over 5 million internal combustion, hybrid and plug-in hybrid engines and transmissions per year, supplying over 130 countries and regions.

1992 Mitsubishi Diamante Is a Diamond, Brilliant in Every Facet

The latest update to the Mitsubishi Outlander is purely cosmetic. New looks add to the upmarket image. The cabin feels solid. Legroom in the second row is generous. The 2,4-litre engine is outdated. Spacious boot houses a massive subwoofer. Road TestsBy: CAR magazine Mitsubishi has given the Outlander another ...

A fun family day out. Enjoying the sandy playground. A solid but slightly outdated interior. Not afraid of some sand driving. Fairly sporty side profile. Yes, the boot is compromised but we still fitted everything we needed for the day out. The Mitsubishi Pajero SWB Legend II is right ...

Rock sliders for added protection. This Mitsubishi Pajero Sport Shogun features R70 000 worth of kit. The 2,5 turbodiesel engine powering all four wheels. The Shogun features protective plates. The roof rack plus an LED light. Cargo mats in the luggage area. The snorkel for water crossings. The second ...

The dynamic front design is in contrast to the rear. Proportions at the rear are unusual. It’s a well-equipped crossover but the competition is tough. Cabin design isn’t revolutionary but it boasts plenty of kit. Boot space is compromised due to a full-size space wheel and that sloping roof ...

News BlogsBy: CAR magazine I’m quite excited about this vehicle. You might ask: “Really, because of a bakkie?” Let me explain. South Africa is a bakkie–mad nation. Not only do the sales charts indicate as much but around most braais and automotive discussions the focus moves towards off-road vehicles and ...

The Outlander’s latest shape drew mixed reactions. The Outlander’s rear styling is un-cluttered. Its cabin features high spec and wood trim. Off-road ability is good thanks to four-wheel drive and a low-ratio setting on the CVT gearbox. The second row is spacious, while a third row is hidden behind ...

Spotlight on Safety: A week with the Mitsubishi ASX