Daniel Ricciardo’s Belgian Grand Prix weekend was compromised by a problem that meant he had to abandon the lower-drag rear wing McLaren developed for the race.

Ricciardo went into the Spa event on the back of agreeing to an early termination of his McLaren contract at the end of 2022, and his struggles to match team-mate Lando Norris continued.

Even though Norris did not complete a second run in Q2 specifically so he could give Ricciardo a tow, Ricciardo was outqualified by Norris – the Australian exiting in Q2 from 11th while Norris was two tenths of a second faster in ninth in that session then 10th in Q3.

Grid penalty outcomes then dropped Norris to 17th and lifted Ricciardo to seventh, yet Norris was ahead again in the race – finishing three places ahead of his team-mate in 12th.

Ricciardo had hinted after qualifying that his performance was compromised by a factor outside his control and after the race, it emerged he did not have the intended rear wing on Saturday or Sunday.

McLaren has not specified what the issue was but it only had two such parts and that meant Ricciardo switched to an older rear wing with slightly more downforce and drag.

This hurt him badly in the grand prix as he was vulnerable on the straights and gradually slipped out of the points.

“We simply just weren’t quick on the straights,” said Ricciardo. 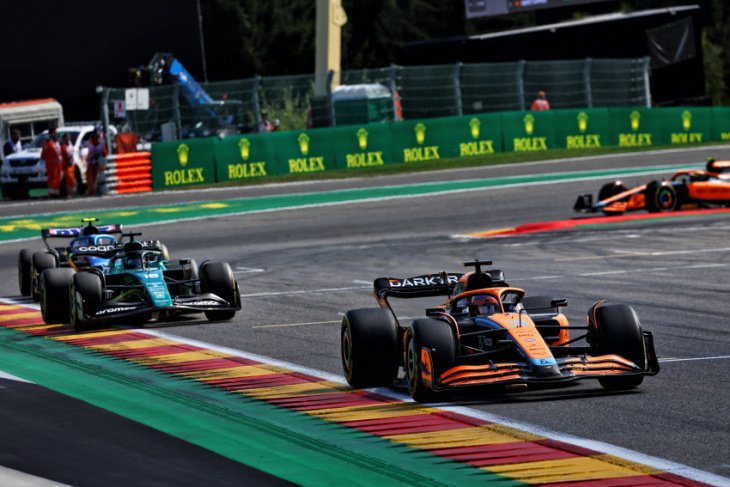 “I had to put a different wing on because our race-spec one had a bit of an issue. I knew it would hurt us on the straights with more drag.

“I saw ahead that I wasn’t the only one struggling to pass on the straights but I had speed to use in the second sector. But the first and third sector, even with DRS, I couldn’t pass.

“It was a pretty long and frustrating race, I felt like we were waiting for a mistake. I said on the radio ‘I’m trying but unless they make a mistake in front, it’s literally impossible to pass’.”

With the Williams of Alex Albon so fast on the straights it got ahead early on, and Ricciardo struggling to get back past, McLaren was effectively forced into an alternative approach for the rest of the race that did not pay off.

Ricciardo was called into the pits for his final stop on lap 26 to try to undercut Albon. At that point he was running 10th.

But then Albon pitted, so Ricciardo stayed out as he needed to do the opposite of the Williams.

Ricciardo extended his stint to get a tyre offset and set himself up to attack late on, but it didn’t work.

That dropped him down a number of places, allowing Lance Stroll, Norris and Zhou Guanyu to get ahead.

Ricciardo said he realised when Albon blasted past on the second lap after the safety car restart that he was in for a long afternoon.

“If we had a little bit of distance on him, the race probably could have been very different,” said Ricciardo.

“But I think when his tyres were fresh that Williams had good speed to use.

“He struggled more with deg but early in the race he had pace.

“That first and third sector, if I didn’t have a tow from somebody in front, I was a bit of a sitting duck.”