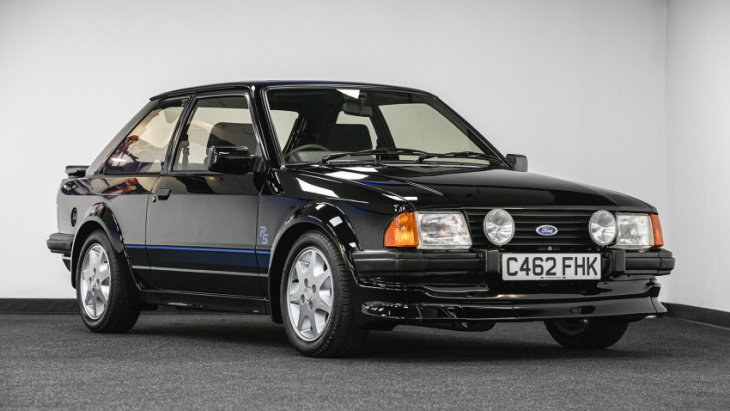 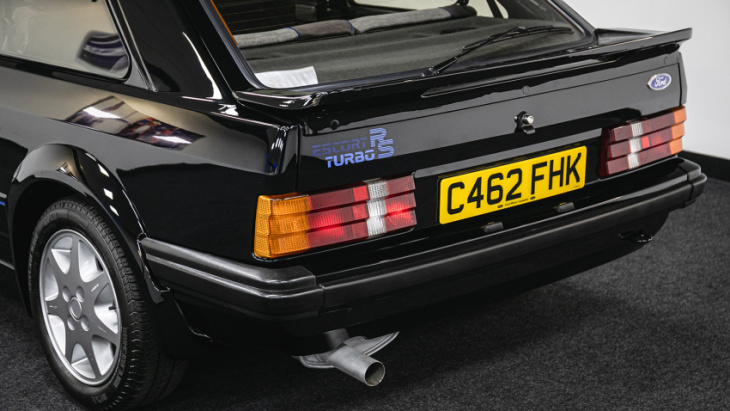 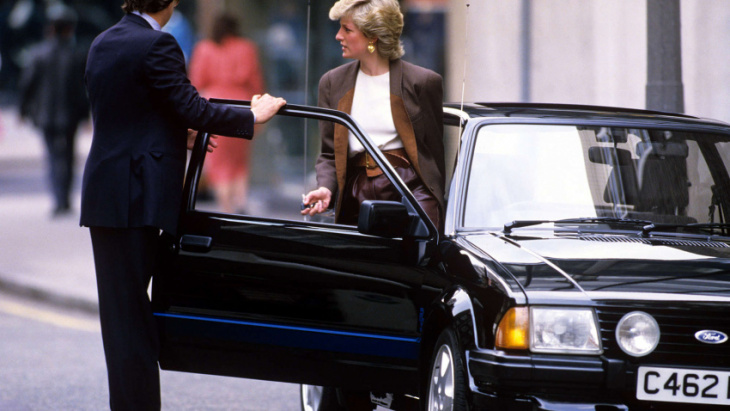 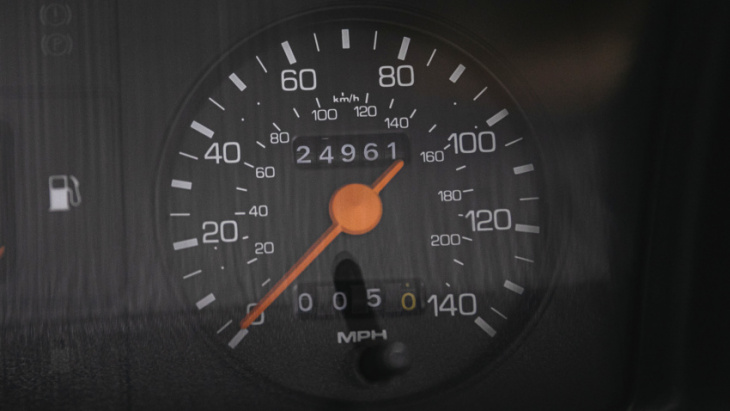 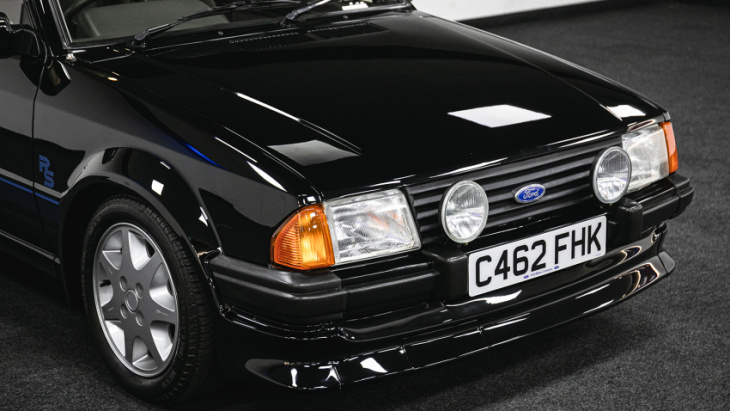 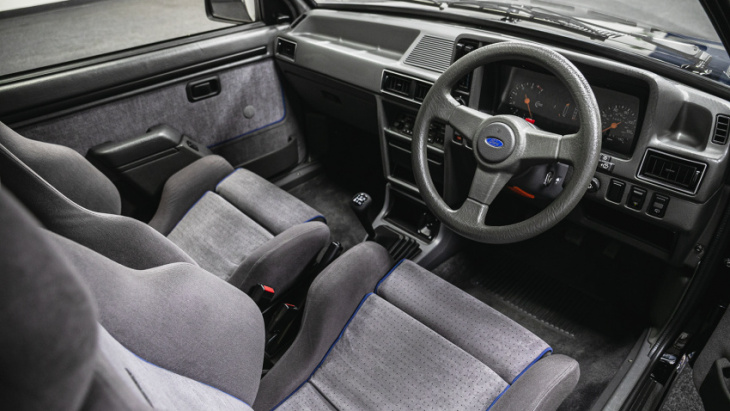 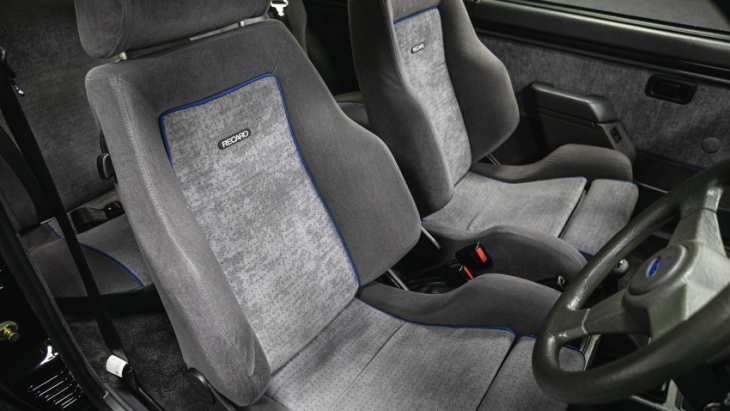 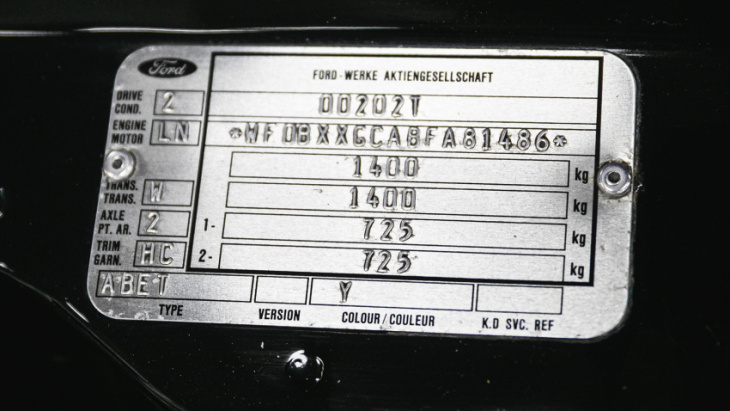 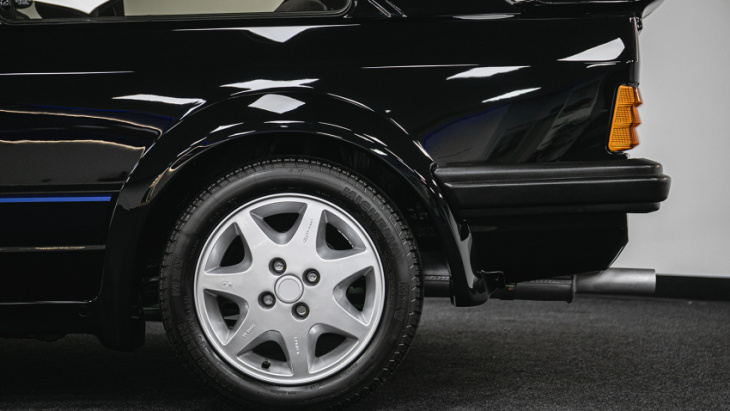 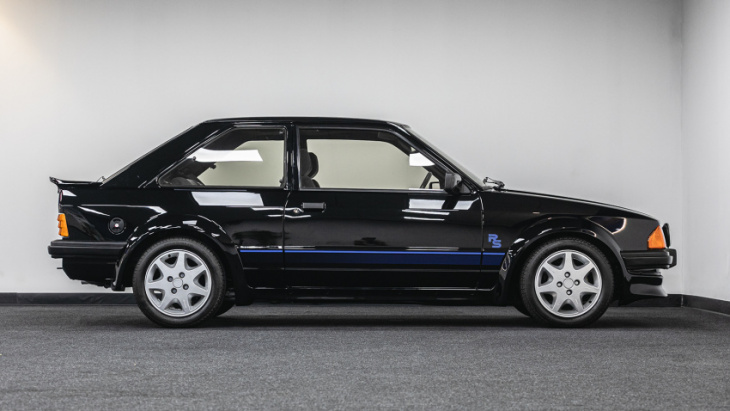 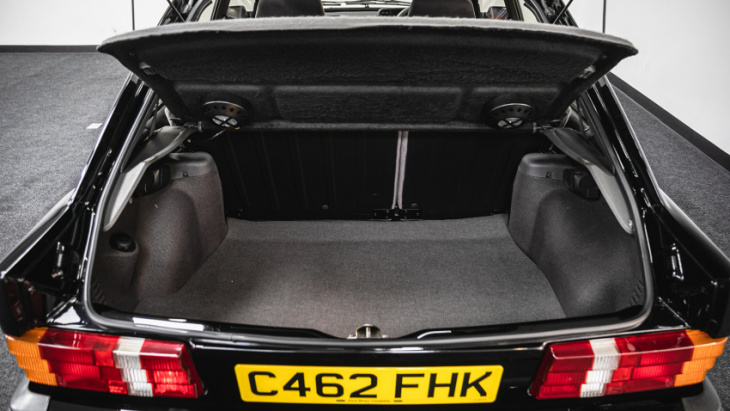 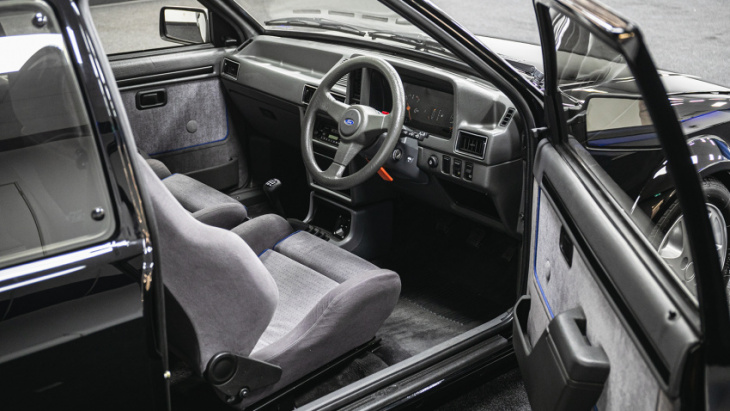 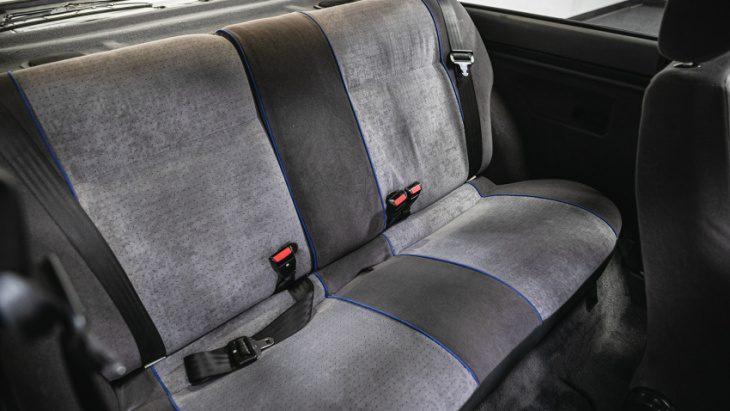 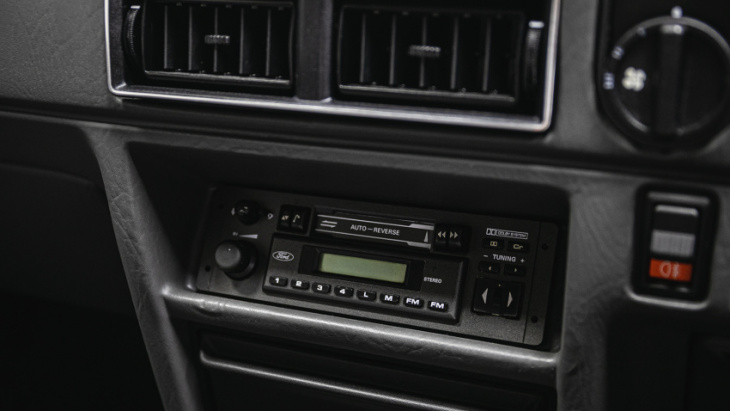 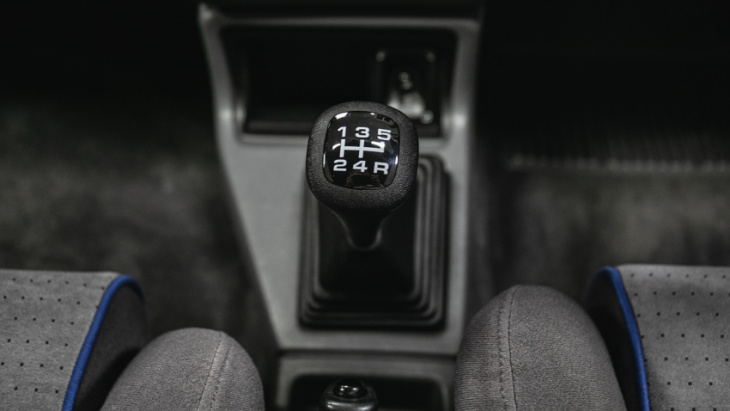 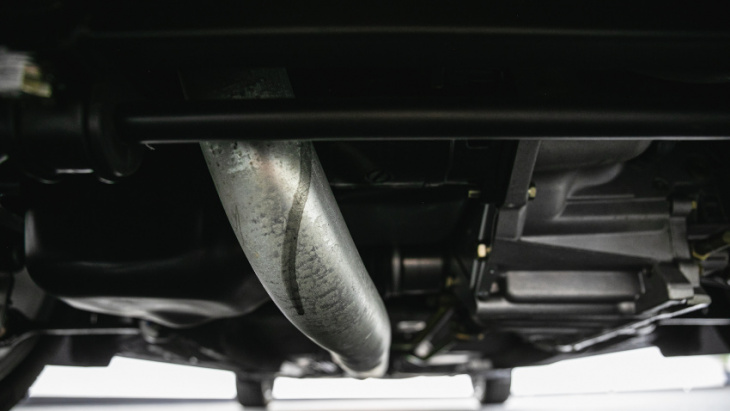 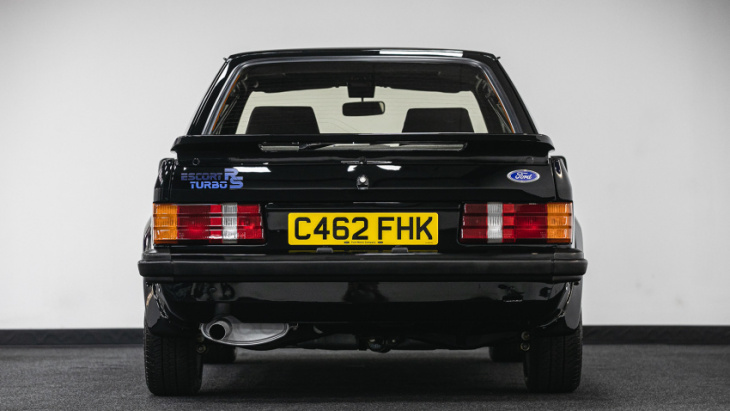 Today (27 August 2022), this 1985 Ford Escort RS Turbo, first owned by the late Diana, Princess of Wales, has made history at Silverstone during Silverstone Auctions’ The Classic sale.

It was being offered with no reserve, yet has achieved an eye-watering sale price of £730,000, a new model record by a colossal margin.

Let’s find out what makes this car so special.

It is understood that Diana actually wanted a red Ford Escort 1.6i Cabriolet, but the lack of protection offered by a canvas roof was deemed to be too much of a security risk.

When looking at other options, it’s said she was insistent it was an RS Turbo – and who can blame her?

And here is Diana, Princess of Wales, with this very car.

As you can see from the odometer, this classic Ford has covered fewer than 25,000 miles.

When the car was returned to Ford Motor Company in May 1988, at the end of Diana’s custodianship, it had done around 6800 miles.

Silverstone Auctions says it is unique.

That is because it is the only Series 1 Ford Escort RS Turbo finished in black. All the rest were white. We don’t know who decided this car should be black, but it looks great in this under-the-radar colour.

Look inside and you can see what superb condition this car is still in.

Even without a (very) famous first owner, this would still be a fantastic example of the breed.

Those grey Recaro, bucket-style front seats with slender blue piping, matching the exterior badges, look to have been barely used.

Well, the car has yet to hit the 25,000-mile mark, but it has still clearly been very well cared for in its 37 years.

Engine number FA81486 still resides under this Ford Escort’s bonnet as it did when new.

Ford had planned to build a total of 5000 RS Turbos, to meet the homologation requirements for Group A.

The aforementioned Recaro seats were included, plus a limited-slip differential and these fetching alloys from the limited-run RS 1600i.

In fact, this model was the world’s first front-wheel-drive road car to use this compact viscous-coupling design of limited-slip differential, rather than a mechanical set-up.

More than the average

As you might expect, Princess Diana’s Escort RS Turbo was a little different from standard.

As well as the unique paintjob, this ’85 car has a regular five-slat front grille, fitted by Ford’s Special Vehicle Engineering department, apparently to help this royal conveyance to fly under the radar.

Better to be safe

This car also gained a secondary rear-view mirror for the protection officer, with a radio in the glovebox, the cable for which is still visible today.

It has a decent-sized boot, too. Well, its first owner did have two young children – Prince William was born in June 1982 and Prince Harry followed in September 1984. This car was registered to Diana on 23 August 1985.

Diana, Princess of Wales, was often photographed in this car, out and about in west London.

Perhaps having a Ford, rather than a Rolls-Royce or Bentley, appealed because she was known as the People’s Princess, and this was a much more relatable, down-to-earth choice.

Can you imagine Princes William and Harry in the back?

In fact, you don’t have to, because press photographs exist of Prince William as a rear-seat passenger in this car, with his beloved mother at the wheel.

What we can’t guess is the music played or radio shows listened to through Ford’s standard-fit radio and tape deck.

However, what is clear is that it remains in excellent condition, the script still crisp and white almost 40 years on.

The same goes for the gearlever for the five-speed manual ’box.

It appears to be unscuffed and in as-good-as-new condition.

It is understood that Diana, Princess of Wales, preferred to drive her Ford than to be driven.

Of course, there would always be a member of The Royalty Protection Command alongside in the passenger seat.

The good news for this car’s new owner is that this Escort just doesn’t look great inside and out – it appears to be the same story underneath, too.

It was then sold internally to the manager of the company’s Government Sales department, Geoff King, who bought it for his wife to enjoy.

After that, this car was thrust back into the limelight, on a rather smaller scale, when, in September 1993, it was part of a promotional giveaway by the radio station Kiss FM.

With around 12,000 miles under its wheels at that point, the lucky winner was Miss Jones, from Essex.

On the move again

An appropriate name, given this Ford’s provenance.

Under lock and key

Fast forward to 2008 and this special Ford Escort was spotted by a model specialist.

The car then went to join what’s said to be one of the best collections of Ford RS cars in the UK.

Which accounts for its pristine condition.

As a knowledgeable marque enthusiast, who understood what makes this car unique and an excellent example of the model, it has since been lovingly cared for and preserved.

The history of this car, chassis number WF0BXXGCABFA81486, has been fastidiously archived.

The mileage can be verified thanks to the many MoTs in its paperwork, plus this Escort has a Lifetime Tracker which can be transferred to the winning bidder later this month.

When royal cars are returned to the factory, they are often ‘replated’, which means they gain a new numberplate.

This duly happened with this car, however in its extensive paperwork is correspondence from the DVLA which shows it was later re-registered with its original numberplate, C462 FHK, so today it is just as it was when Diana, Princess of Wales, drove it.

As you will have seen, the level of detailing that has been carried out on this Ford Escort RS Turbo is outstanding.

Today it is surely a concours contender.

So whether you’re a classic Ford devotee or a keen follower of the British royal family, there is a lot to get excited about with this car.

It is hard to believe it is 37 years old.

Now 25 years after her death on 31 August 1997, Princess Diana’s Ford Escort RS Turbo has achieved a new world record for the model at auction.

To repeat, the previous record was £63,000, today’s £730,000 sale figure beating that by a margin nobody surely anticipated.

Arwel Richards of Silverstone Auctions said: “The final tussle for ownership of the car was between a Dubai buyer and a Cheshire-based English buyer, both bidding online, with the English bidder winning the car in the end. The atmosphere in the auction room was electric.”

We think we might have to go for a lie-down now.