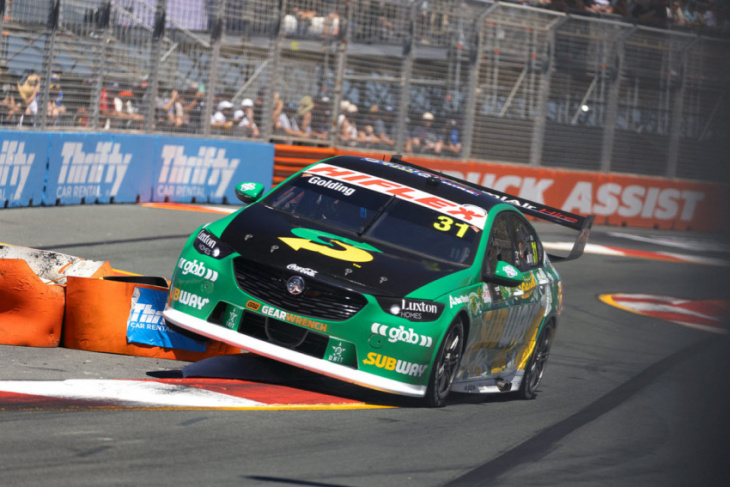 PremiAir Racing has confirmed a new contract for James Golding for the 2023 Repco Supercars Championship.

Golding will continue to drive the #31 entry after joining the squad midway through the current season when Garry Jacobson was dumped from his seat.

“Despite being thrown in the deep end part-way through a highly competitive Supercars season, Jimmy has held his own and worked exceptionally well with our team to deliver increasingly improved results,” said Team Owner Peter Xiberras.

“We have greatly enjoyed working with Jimmy over the second half of the 2022 season and to us it was a no-brainer to keep him on for 2023.

“I know everyone at PremiAir Racing is very pleased that he will be continuing on with us for the new season.”

Team Principal Matt Cook added, “There is no arguing the fact that Jimmy is talented behind the wheel and with what he has been able to deliver in a baptism of fire and in our older car no less, we are truly excited to see what we can do together across an entire season, and with new Gen3 equipment to boot.”

Golding himself remarked, “Since joining the team halfway through the season, it has been a big challenge for sure but one that I have really enjoyed.

“It has been great working with the whole team and improving our performance as the year has progressed.

“I want to thank Peter and Matt for the opportunity they have given me to not only prove myself, but also trust me to lead the team in the right direction.

“I also want to thank everyone who played an important role in my return to Supercars and have ultimately led me to this opportunity.

“I thank my family, friends, and sponsors for their tremendous support on what was a difficult time away from full-time Supercars racing.

“From the moment I joined PremiAir Racing I have felt welcomed.

“I am excited by the potential I can see in our young team. I can’t wait to see what we can achieve together in 2023.”

Golding is 25th in the championship having just recorded his first DNF last time out on the Gold Coast when he set off a pile-up at the Beach Chicane in Race 32 of the season.

The announcement means PremiAir’s full-time driver line-up is now locked in for 2023, with Tim Slade already confirmed in its other entry.

Golding and Chris Pither will drive for the squad in the season finale, the Valo Adelaide 500, on December 1-4.

Formula 1 has a Cost Cap, but should Supercars follow as it heads into the Gen3 era? Formula One introduced its Cost Cap for the 2021 season in order to try to level up the competitive playing field as well as ensuring that more teams are profitable (or at ...


View more: Roland’s View: Is there a case for a Cost Cap in Supercars?