The new 800-volt Premium Platform Electric will be modular and will support rear- and all-wheel-drive systems. Porsche is looking to expand its battery-electric endeavors with an entirely new platform that will underpin, as Porsche says, “a wide array of models.” Kicking off the Premium Platform Electric (PPE) is a battery-electric Macan. Porsche’s new platform will also support an 800-volt architecture, which Porsche rolled out with its Taycan. More important than the architecture’s voltage, Porsche says the system “will initially go up to around 450 kW,” which is a whopping 603 hp.

That promises good fun for the upcoming Macan EV. Porsche also notes the new platform will have over 1000 Nm of torque—that’s 707 lb-ft, which means the upcoming plug-in compact crossover will hustle.

Porsche notes the upcoming platform will be modular and will support rear- and all-wheel-drive systems. While this is officially going to kick off with the new Macan EV, it’s hard to ignore the rest of Porsche’s lineup. It’s almost a safe bet that larger Porsche crossovers like the Cayenne will also see product from this new PPE platform, and the rear-drive ability could hint at a battery-electric Porsche 911 in the near future.

Adding to the 911 EV speculation, this platform’s rear motor, as Porsche says, “is positioned particularly far back, resulting in a slightly rear-focused weight balance with the ratio of 48% to 52%.” It’s hard to say whether this rear-weight bias is an homage to the 911 or just a mere coincidence. Powering this new platform are permanently excited synchronous electric motors.

The AWD variants can also bias power to the rear with what Porsche calls the Performance rear axle, which contributes to the weight distribution noted above and helps handle a fully variable torque distribution. While that’s good news in general—and should make the Macan EV interesting on a track—this fully variable torque management points further at the possibility of another high-performance sedan or coupe coming down the pipeline. 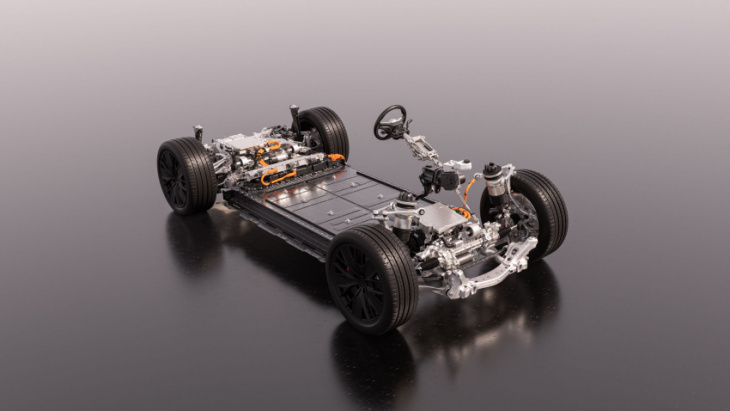 Powering all of this is a roughly 100-kWh battery. Porsche says this size successfully balances range, performance, and sustainability. That’s larger than the battery packs currently available in Porsche’s flagship Taycan EV but would still pale in comparison to the massive battery pack found in the bones of the GMC Hummer EV. This size also lines up with the battery capacity from the Tesla Model S P100D. Working with the 800-volt system, Porsche says you can expect 80% of a charge from 5% in 25 minutes. Of course, that’s more of a theoretical rate and depends on how you’re charging the battery.

Still, it’s hard to say what the PPE will underpin until it starts to officially roll out into the Porsche lineup, starting first with the Macan EV. Porsche has yet to officially say when we can expect a Macan EV, but it shouldn’t be a shock to see one show up for the 2024 model year.

Keyword: Porsche’s Macan EV Will Debut a New Platform with a Ton of Power