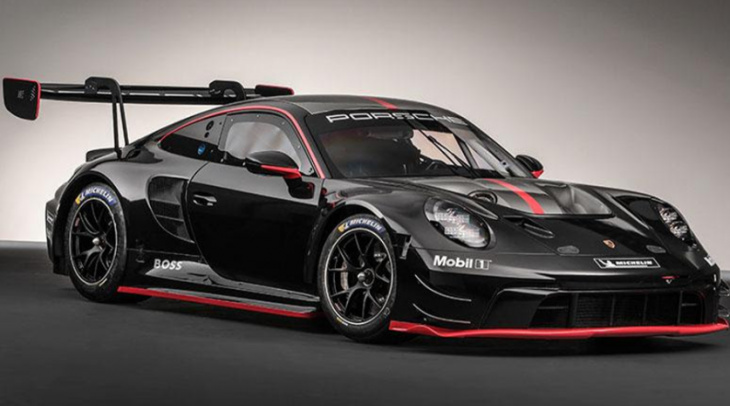 DAYTONA BEACH, Fla. – While 2023 is shaping up as a banner year for the IMSA WeatherTech SportsCar Championship and sports car racing around the world, no manufacturer is looking forward to the new season more than Porsche.

In addition to Porsche Penske Motorsport fielding a pair of 963 LMDh prototypes in the hotly anticipated new GTP class, Porsche is introducing an upgraded 911 GT3 R for the GTD (Grand Touring Daytona) and GTD PRO categories based on the latest ‘992’ iteration of the iconic sports car.

Porsche has offered a racing version of the 992-gen 911 for the Porsche Carrera Cup North America Presented by the Cayman Islands since 2021, but the 2023 Rolex 24 At Daytona will be the IMSA debut for the GT3-specification version of the latest street-worthy 911.

Keeping to the near 60-year 911 tradition, visual similarity to previous generations is a given. But starting with an enlarged 4.2-liter version of the legendary Porsche flat-six, the 992-based GT3 R is a very different proposition to the outgoing 991.2 GT3 R under the skin. That’s why Technical Support Specialists from Porsche Motorsport North America (PMNA), along with crew members from several Porsche-affiliated IMSA teams, recently spent three days at the Hockenheim circuit in Germany learning the ins and outs of operating, tuning, servicing, and maintaining their new $567,000 toy.

“There are a lot of small changes, but changes that are going to be really important for teams to focus on,” explained Lauren Elkins, one of three Technical Support Specialists assigned to IMSA out of PMNA’s Los Angeles headquarters

“We focus mainly on the mechanicals of the car, specifically showing them how to build the differential, the gearbox, and different areas on the engine that they are going to need to pay close attention to – we’ve shifted some things from the previous generation of the car. 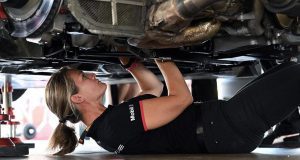 “In conjunction with the mechanical side of things, we also focus on the software,” she continued. “We’re introducing some new tools that teams can access this year, and we’re really excited about them. We’re also introducing a different damper. The car is also heavy on aerodynamics; it’s really important for us that our teams know precisely how to level the underfloor of the car, and how to set up the splitter and the diffuser. Those are really critical areas that are important to performance.

“I think everybody came away thinking, ‘This is going to be a really cool car!’ They’re really excited about it.”

While much of Porsche’s concentration during the development of the 992-based 911 GT3 R was on making the car more user-friendly for a wide range of drivers, the marque also sought feedback from teams in terms of how to make the car easier to repair or maintain.

The ability to swap out bodywork or mechanical components quickly in the heat of competition can be a key factor, especially in endurance racing.

“There was definitely a focus on usability and serviceability for the teams,” Elkins said. “When we looked at the 992, we tried to figure out, ‘How can we make it more accessible to teams and more customer friendly?’ It’s a customer program, and we want to give them a full product package that they are able to go and run with.”

Porsche differentiates itself from other manufacturers with the level of support it provides its customer teams. Elkins, Nathan Tasukon, and Michael Wong (whose specialty is the 718 GT4 RS CS that competes in the IMSA Michelin Pilot Challenge) travel to all IMSA events and are available round-the-clock to assist teams when they conduct private tests.

“We’re really on call 24/7 for technical support,” Elkins confirmed. “One of the things that is important for us is that teams have all the tools they need to go racing and testing, even if we’re not on site. The level of tools available to the teams, particularly in simulation software this year, is something they have never had access to before.

“No matter where a Porsche is racing in the world, you can access somebody,” she added. “We transfer tons of data, and we’re available on Team Viewer to guide them through software. It makes for some long nights, because it’s not unusual to get a call from somebody at Sebring at midnight! But we just want all our teams to succeed.”

Porsche’s 2023 GTD and GTD PRO team and driver lineups for IMSA are yet to be revealed. News is expected to be released at the company’s annual Motorsport Night of Champions in Germany, or by individual teams.

“The level of teams that are coming is really exciting,” Elkins said. “We have teams returning that are committed to the Porsche brand, and we have teams that the minute they heard about this car, were banging on the door, saying, ‘We want to run that car! We want to be a part of this.’”