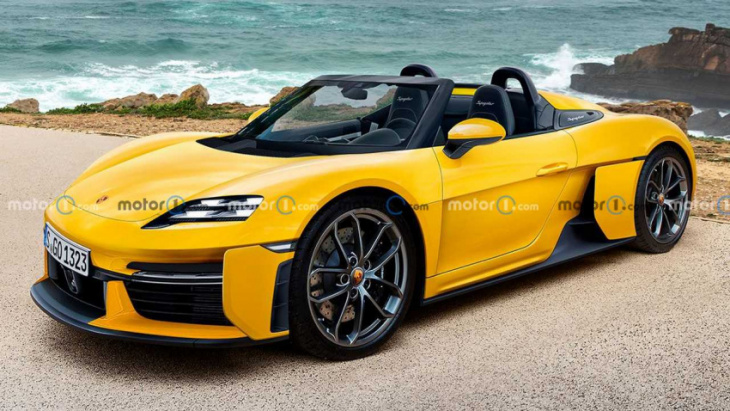 Believed to be called the Boxster Spyder RS, the ultimate incarnation of the 718 will be the most hardcore version of the convertible to date. What will come after it is going to be an entirely different car as the house of Zuffenhausen has already announced its smaller sports car is going to be purely electric. Porsche will therefore apply a different strategy compared to the 911, which will first go hybrid before losing its ICE after 2030.

To signal its EV ambitions, Porsche unveiled the Mission R concept about a year ago as a fully electric race car with aggressive aero and nearly 1,000 horsepower. The subsequent Boxster EV won’t be as dramatic, but some of the styling cues should rub off onto the road-going model. A new rendering from our pals at Motor.es attempts to predict the convertible’s future by adapting the concept’s DNA to a tamer street-legal car.

Because good things come in pairs, the German high-end marque is also working on a new Cayman with a fixed metal roof that should be even closer to the Mission R. It’s worth noting last year’s concept was actually based on the current Cayman GT4 Clubsport. The actual production version will ride on an adaptation of the forthcoming Premium Platform Electric (PPE) co-developed with Audi, which means some of the proportions will change after getting rid of the old ICE bones.

Porsche argues the electric 718 duo will stick to the mid-engined layout of the gasoline-fueled models by installing the battery pack between the axles. That’ll give the sporty EVs a lower center of gravity and optimized weight distribution to sharpen up handling. Speaking of which, the all-wheel-drive Mission R with its dual motors tipped the scales at just 1,500 kilograms (3,306 pounds). It’s an impressively low curb weight considering the Cayman GT4 RS is only 85 kg (187 lbs) lighter.

While it’s perfectly ok to be skeptical about the prospects of an electric sports car, if there’s one automaker that can pull it off, it’s certainly Porsche. With the Taycan, the company has demonstrated even a fairly large and heavy vehicle can appeal to enthusiasts while offering the practicality of a four-door model.

Before the 718 goes electric, the Macan will be doing the same at some point next year and peacefully coexist with the gasoline model for a short while. Later this decade, a large SUV built in Leipzig will be added to the EV lineup.