The special finish is part of the Rallye Design Package and includes considerable work done by hand. 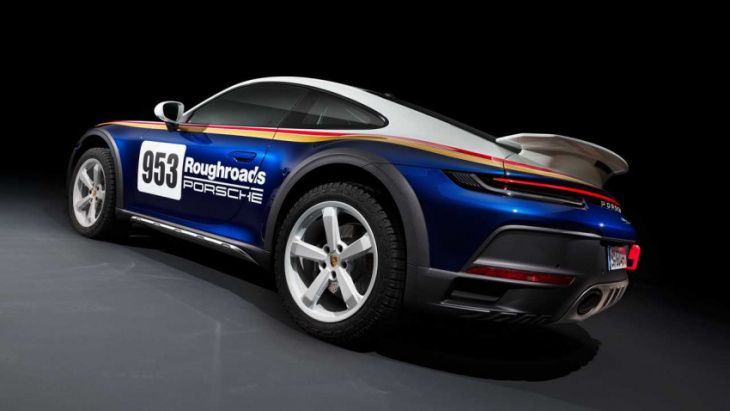 Porsche chose the 2022 Los Angeles Auto Show to debut its rally-themed 911. Named Dakar, it’s an homage to the company’s legacy in off-road racing, and it’s even available with a special two-tone exterior finish in the style of the classic Rothmans livery. As it turns out, that paint job is really special, not just in appearance but also how it’s applied to the car.

Speaking to Porsche at the LA Auto Show, we learned it takes approximately 34 hours all total to complete this two-tone treatment. It’s part of the Rallye Design Package, and it also includes extensive striping that is handled by Porsche Exclusive Manufaktur.

It all starts with a 911 body painted white, which is sprayed with clear coat and sanded. The car is masked and prepped for the initial layer of Gentian Blue Metallic paint, which is applied manually. Once everything is dry, the masking is removed and the first of two additional clear coat layers is sprayed. According to Porsche, this is approximately a 7.5-hour process.

Once everything is dry, the 911 Dakar body is sent to the production line for assembly but it’s not the end of the special process. The completed 911 then goes to Porsche Exclusive Manufaktur for the foiling process. This requires partial disassembly of the body, adding another 8.5 hours to the process. Once the car is back together, it’s given a final inspection then covered for transport to the dealer.

The retrotastic exterior is the highlight of the Rallye Design Package, which adds a hefty $28,470 to the 911 Dakar’s $223,450 base price. The package also includes black seats with Shark Blue seat belts and Ceramica trim, though we suspect the bulk of the cost goes to the complex paint job.

Of course, the 911 Dakar doesn’t simply look like a classic Safari machine. Porsche retunes the suspension and adds a two-inch lift, which increases to just over three inches when the electronic lift system is activated. It rides on Pirelli Scorpion all-terrain tires made specifically for the 911 Dakar, and at the back, you’ll find the same 473-horsepower twin-turbocharged flat-six engine used in the 911 GTS.

See more of the 911 Dakar and other recent LA Auto Show debuts in the Rambling About Cars podcast, available below.

BOLOGNA: Porsche recently debuted an off-road version of its 911 sports car, the 911 Dakar. Now another brand that made its name building track-focused sports cars wants to do the same. Lamborghini unveiled the Huracán Sterrato, a jacked-up version of its US$270,000 Huracán supercar on Nov 30. The Sterrato ...