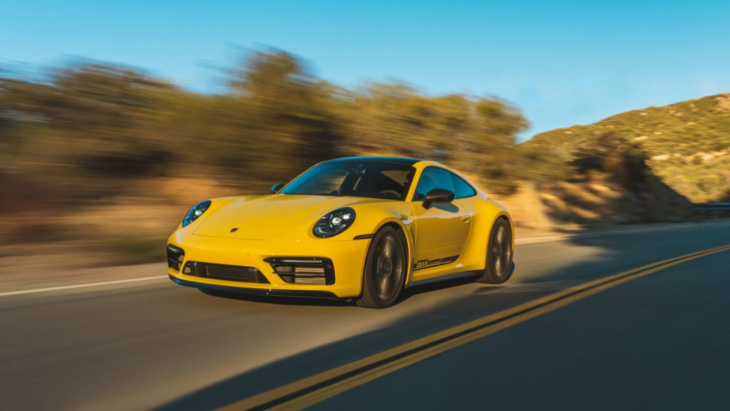 Some will dismiss the new 911 Carrera T as a more expensive way to still be slower than the more powerful 911 Carrera S, which would be missing the point spectacularly for this latest addition to the 992-generation of Porsche’s 911 Carrera is the best one you can buy.

It’s not about the 35kg weight saving over the 1505kg Carrera, achieved through ditching the rear seats (which you can have put back in for no additional charge), installing a lighter battery and fitting lightweight glass, or making the seven-speed manual gearbox available with the Carrera’s 380bhp engine for the first time. Although, that last item is instrumental to the T’s large appeal.

It’s rather the T’s package as a whole, which also includes a lower sport chassis (by 10mm) and PASM damping, the former also not available on the Carrera on which the T is based, torque vectoring and the mechanical limited slip-diff, all which combine to create a modern day 911 with more than a touch of old school charm and character. Add in the optional £1,592 for rear axle steering (and we would) and you have a 911 that ticks that real-world, everyday use box, but not at the expense of thrills. Whereas the range topping Carrera GTS demonstrates what’s possible with a Carrera when you push it as close as you can to a GT3, and the T shows what’s capable at the other end of the spectrum, albeit in its own unique way. 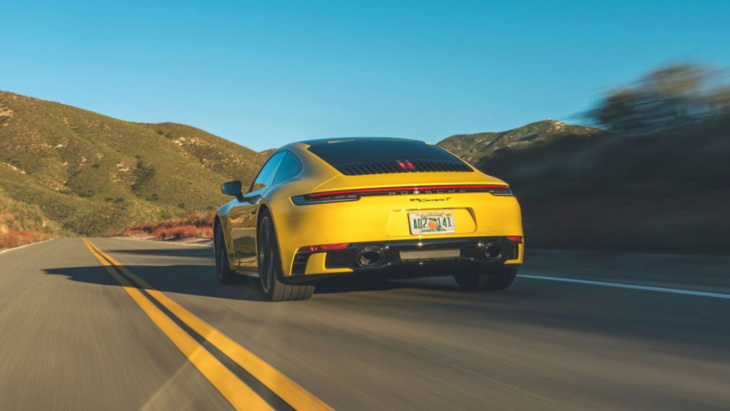 For the T it starts the moment the road opens out. You’ve already appreciated the well judged damping on dull roads, the way it absorbs imperfections and expansions in the road surface far better than its Pirelli P Zeros suggest they would when you’ve clocked the 35 and 30-profile sidewalls and 245 and 305 wide tyres fitted to the 20 and 21-inch wheels. No, when the road broadens and you set the drive mode to Sport, the T starts to deliver beyond your expectations, ready to be enjoyed to a level a basic Carrera struggles to reach.

Its twin-turbocharged flat-six is no more powerful but it doesn’t need to be, it has more than enough muscle for the road with its broad delivery of torque getting you to 5000rpm with little effort, the next 1500rpm adding more fizz as the power takes over and the performance edge sharpens. It’s easy to get misty eyed over yesterday’s naturally aspirated flat-sixes, but this turbo’d motor not only lacks all of the negative characteristics of a turbocharged engine, but it also possesses many of the good attributes that makes an N/A engine such a joy.

A great deal of enjoying the T’s engine and the performance it has to offer is because the manual hands back more control. Yes, the optional – and heavier – eight-speed PDK offers manual shifts, but the poor paddles are as engaging to use as tofu is suitable as a meal choice. Hang on to third gear for pretty much everywhere and you’ll enjoy the full elasticity of the engine’s reach. Row the lever around its gate and the experience heightens, your sense of being integral to the action increasing further still. 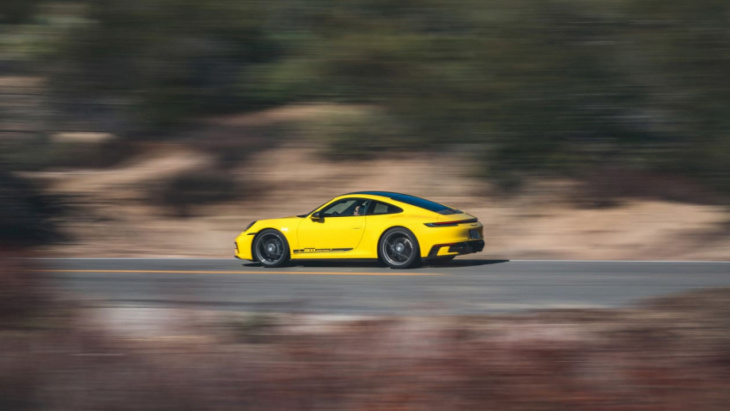 Then you reach the fun stuff on the road. There’s a precision in the T’s front end that’s lacking in the Carrera. Its ability to turn in quicker and with more confidence is down to a mix of a front end that’s tied down more securely and a rear that’s more mobile now there’s a few degrees of movement going on. The balance, the poise and the reassurance it gives back means you’re always flowing in the T, balancing it through an apex, opening the throttle sooner and with more gumption on the exit knowing the grip is there, and the diff will let you lean on it more than you will ever need on the road.

It still moves around like a 911, diving just enough under braking, adding some roll through the turn and squatting on its hind quarters as you power your way along the road. This suppleness adds to the T’s character and ability, giving it an identity above a regular Carrera and replacing the fast but clinical approach of the Carrera S and, I suspect, not afraid to ask questions of a GTS given half a chance.

Criticisms? It’s not cheap at £98,500 and when you add some very light options it’s a near entry level 911 that costs more than £100,000. The manual gear shift, for all the interaction it provides, isn't the quickest and it’s still easy to be caught out when moving across its gate. And no manual needs seven ratios. Yet if you have the means a Carrera T with rear axle steer is hard to ignore because not only is it the best 992 Carrera it’s one of the best modern era 911s.

In just the last two years, our Car and Driver test team has vetted many flavors of Porsche, 34 to be exact. Of the stack from Stuttgart, 11 were GTS models, four of those 718s, but this Python Green ($2580) 718 is the first Boxster GTS we’ve tested with a ...

The sun is a natural energy generator; it provides light, helps plants to grow, and is the main source of fuel for this streamlined electric vehicle with a name that goes through infinity and beyond. This is the Lightyear 0 and it is developed by a Dutch mobility startup ...