Polestar specializes in all-electric luxury cars, but some features have surprisingly been missing from these high-end EVs. For example, the brand’s primary offering, the Polestar 2, didn’t have Apple CarPlay. However, to iPhone users’ delight, CarPlay is now available in the Polestar 2. Here’s a look at the company’s plan regarding Apple CarPlay in the rest of the EV maker’s lineup.

What is Apple CarPlay?

Apple CarPlay will come to Polestar 2 as part of an OTA update later this month. We're also thrilled to announce that the next generation of CarPlay will be coming to Polestar cars in the future. pic.twitter.com/iaG9aRmyER

Apple CarPlay allows riders to connect an iPhone to a vehicle. Wireless Apple CarPlay is the same but connects through Wi-Fi, so there’s no need for a USB cable. Once connected, CarPlay lets occupants use many iPhone features through the vehicle’s infotainment system.

That’s because users can access Apple CarPlay via the vehicle’s central screen, and voice commands are also available. With CarPlay, drivers and passengers can use their iPhones to play music for the whole car. In addition, owners can use CarPlay to access Apple Maps, Google Maps, Waze, or other navigation apps instead of paying extra for a built-in navigation system in the vehicle.

According to Business Insider, Apple plans to give CarPlay a major update in late 2023. This update will allow users to customize their car’s dashboard with widgets and other features. Currently, many automakers provide Apple CarPlay in their models because it’s a popular feature. However, not all brands offer the software; that included Polestar until recently.

The Polestar 2 received Apple CarPlay this past summer 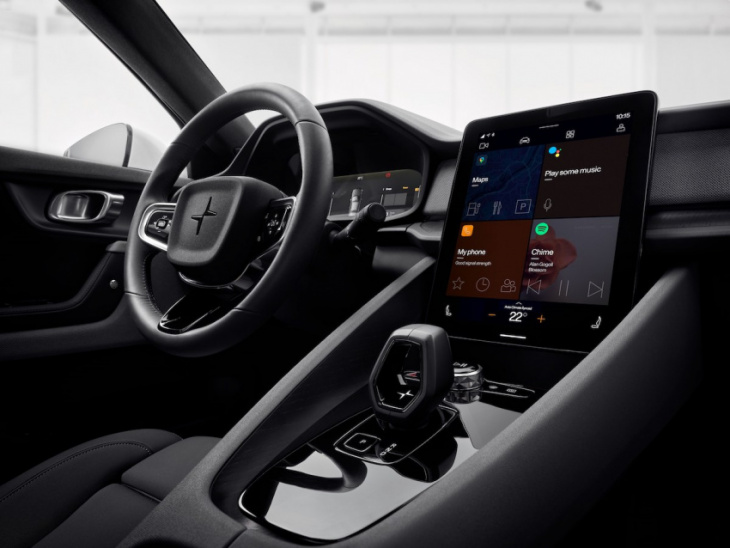 Polestar recently updated the Polestar 2’s infotainment system to include Apple CarPlay compatibility. The main reason for the delay in offering the feature is that the Swedish EV maker, a division of Volvo, has a deep relationship with Google. As a result, Polestar’s lineup offered only Android Auto — software similar to Apple CarPlay but for Android smartphones.

That changed this summer when the automaker dropped an over-the-air (OTA) update making the Polestar 2 compatible with Apple CarPlay. Because the update is OTA, owners don’t need to take their EVs to a dealership to get CarPlay; the upgrade should automatically download as long as there’s an internet connection. As of this writing, the Polestar 2 has only standard Apple CarPlay, not wireless, so owners need a USB cable to connect an iPhone to the vehicle.

Once connected, Apple CarPlay should be ready to go, and you tap on the app you want to use. Polestar provides detailed instructions.

In addition, expect the software’s integration in the rest of the Polestar lineup soon. The company has partnered with Apple so that its vehicles will get CarPlay’s big update next year.

Fast facts about the new Polestar 2

The Polestar 2 offers several advantages over other EVs in the segment. The standard model starts at about $47,000 before incentives. It also qualifies for the federal $7,500 EV tax credit as of this writing.

Furthermore, the vehicle also offers a couple of powertrain options. It starts with a single motor making 231 hp and 243 lb-ft of torque, but a dual-motor version harnesses 408 hp and 487 lb-ft of torque.

However, the single-motor model gets better range — about 270 miles. The dual-motor option can go about 249 miles on a full charge.

Keyword: Polestar 2 Finally Gets Apple CarPlay, but What About the Other Polestar Models?

Chassis tweaks for Polestar 2 show what’s possible when the nerds get what they want.


View more: Polestar 6: Everything we know so far

The electric car manufacturer Polestar achieved a turnover of 420.8 million euros in the third quarter of 2022. Compared to the same quarter of the previous year (205.7 million euros), Polestar more than doubled its revenue. In the current year, Polestar was also able to (almost) double its turnover, ...


View more: A Polestar-Tuned Polestar 2 is the best Polestar

Polestar 2 BST, what’s that then? So this a Polestar with Beast-mode? Cool. Is that where the ‘edition 270′ bit of the name comes in?  Ah yes. The stripe. Tell me about the stripe.  So what is new? Is it fast?  Unless you’re on a racetrack, of course. But ...

Apple’s Crash Detection Calls 911 From Roller Coasters, but What About Cars?

Does the 2023 Chevy Equinox Have Apple CarPlay?

Does the 2023 Chevy Traverse Have Wireless Apple CarPlay?

Tesla Could Be Worth More Than Apple, Saudi Aramco Combined: Musk

Apple iPhone Maker Foxconn Would Like To Build EVs For Tesla: CEO

Foxconn wants to be for Tesla what it is to Apple

Does the Ford Mustang Have Apple CarPlay?

Does the 2023 Kia Soul Have Apple CarPlay?

Does the 2023 Chevy Bolt EUV Have Apple CarPlay?