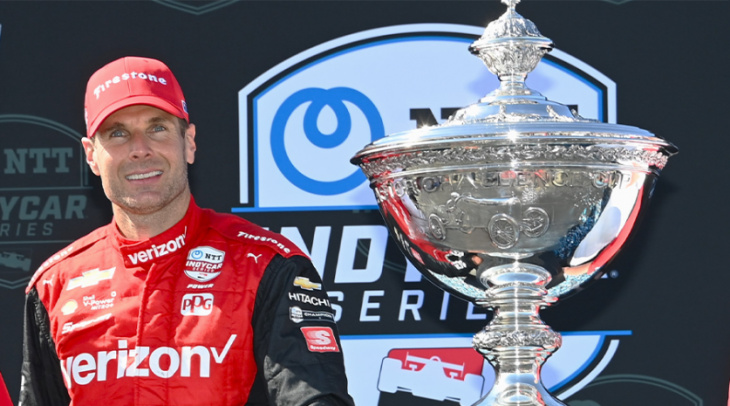 MONTEREY, Calif. – When Will Power won his first NTT IndyCar Series championship back in 2014, he was a wild-eyed man who ran on equal parts nervous energy that was borderline chaos. He was fast on the race track, but his mood and temperament were short. When he blew a fuse, it was monumental, such as his tirade at New Hampshire Motor Speedway in 2011 when a race was restarted in the rain and Power’s car was taken out in an immediate crash. An enraged Power gave the “double bird salute” to IndyCar Race Control that continues to live on in social media. He had come close to winning championships in 2010, 2011 and 2012, only to falter in the final race of the season. Power was obsessed with winning the championship. When he finally achieved that goal at Auto Club (Calif.) Speedway in 2014, his celebration was a release of all the frustration that had built up inside of Power. Back then, Power entered every racing at full throttle, attempting to accumulate wins. Eight years later, an older, wiser, more mature Power discovered “the long game.” 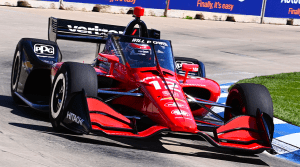 Power on his way to victory at Detroit in June. (Al Steinberg Photo)

Instead of reacting to everything that was an obstacle, Power shrugged it off. Instead of taking a third-place car and trying to drive it to victory lane over its limits, Power would settle for third. That “long game” gave him nine podium finishes including one victory this season. That was far more than any other drivers in the series. His two Team Penske teammate had more victories. Josef Newgarden had a series-high five wins and second-year driver Scott McLaughlin had three, but Power’s podiums reflected his consistency, and he was rewarded with points. Power entered the final race of the season, Sunday’s Firestone Grand Prix of Monterey, with a 20-point lead over two-time IndyCar champion Newgarden and six-time NTT IndyCar champion Scott Dixon. If Power finished third or better, he would clinch the championship. When he broke Mario Andretti’s pole record with his 68th career pole on Saturday, he collected one bonus point to boost his lead to 21. Power started on the pole and led the early portion of the race, accumulating one more point to move, stretching his margin to clinch the championship. He admitted he was nervous when Newgarden raced his way from 25th starting position and passed Power for second place in the final portion of the race. But Power continued to play the “long game.” The leader of the race was Chip Ganassi Racing’s Alex Palou, and he was leading Newgarden by close to 30 seconds with 10 laps left. At that point, Power settled into third place, made sure he didn’t make any mistakes and crossed the finish line under the checkered flag as the 2022 NTT IndyCar Series champion. Instead of being a “Wild Man” in the championship celebration, Power was man enjoying the satisfaction of his achievement. “This championship is for the joy of racing and how much I love the craft,” Power said. Instead of a wild night out with the boys, Power celebrated with his favorite beverage – Green Tea. At 41 years old, Power has discovered how to ride the roller coaster of life without losing his cool. He also won this championship as a bit of a “loner” at Team Penske. He wasn’t a member of the “Bus Bros” that include Newgarden and McLaughlin and their famed YouTube Series that connects with the younger audience. Power goes about his business independent of the “Bus Bros.” But the championship battle did take its toll on the two-time champion. “I’m mentally drained,” Power said. “I couldn’t show the sort of emotion that I showed when I won the Indianapolis 500 (in 2018). “But it’s been like a long journey over the year. I think it’s pretty fitting that we just had another solid day, just a sort of long-game day like today. That’s just been the story of our year.” Winning one championship in IndyCar is a career-defining achievement. Winning multiple championships elevates Power to elite status, especially considering he is the greatest pole winner ever in IndyCar history and has 41 career victories. He delivered Team Penske with a record-extending 17th IndyCar National Championship. It was also the 42nd championship for Team Penske in all forms of racing. 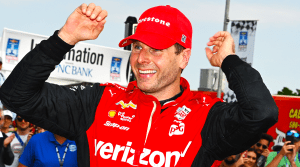 Power’s only victory on the season came at the streets of Detroit. (Al Steinberg Photo)

“All very elite, and just so fortunate to drive for such a team, being given the chance to do this. A lot of gratitude. A lot of gratitude to the team and the sponsors, Verizon. Very lucky. “I dug deep all year, fought hard all year, and that was the case today again.” Experience and a new attitude were the perfect fit for Power’s “long game.” “You’ve done it for long enough, you just iron out all those little stupid mistakes that you have made over your career,” Power said. “That’s what I did. That’s what I have done all year. It’s been a really focused, solid year all around. Great crew. Finished every lap of every race. “We look back at a couple of these years and some of the mechanical failures, some of the things that have gone wrong, it just shows when you’ve got the whole combination together, we’re going to be there fighting for the championship.” The pathway to Power’s second championship meant sacrificing potential victories for podiums. It was a formula for a championship. “Nine podiums, that’s pretty strong,” Power said. “I definitely gave up some wins just for consistency. I definitely could have attacked harder when I was on really good tires. “I know the races — St. Pete was won on the restart. I actually just under drove like you wouldn’t believe to make sure that I finished that stint in a good position instead of — I could have easily attacked and passed McLaughlin. Instead, I actually lost a position on reds. “The other one was Mid-Ohio, restart on reds and just attack here or I can end up — I think I’ll take third. Same with the second race at Iowa. I’ll take second. Make sure the tires last, make sure I finish second. There are definitely some wins left on the table if you were going for that. “But I’ve said it from the beginning of the year, I said, ‘I’m playing the long game all year. I’ve never done that, and I’m doing it this year. I don’t really care about the wins; I just want to win another championship,’ and I played that game. “Maybe I go out next year and try to win races. But if you want to win a championship, you’ve got to play a long game. “I’m older, more experienced, just know the game so well, know the correct mental approach to get the most out of myself and know when to go, when not to go, and just all those little details that you can only get by experience.” A fast race car and an excellent crew at Team Penske certainly helps, too. “It’s a solid year all around as a group, not just me,” the champion said. “The team have done a great job, the group that I’ve had on my car, the pit stops, the strategies, everything. “Total team effort. “That’s the only way you’ll win in this series is absolutely a group effort.”

Two Poles In One Day For Power In Iowa

McElrea Wins At Iowa After Post-Race Penalty On Lundqvist

A Shortage Of Crew Members

Double Wins For Foster On Streets Of Toronto

Palou: ‘No Idea’ How Contract Dispute Will Be Resolved

NASHVILLE, Tenn. – Benjamin Pedersen led the opening practice for the Indy Lights Music City Grand Prix on Friday as the Indy Lights Presented by Cooper Tires championship prepares to race on the streets of Nashville for the first time. Pedersen, from Denmark, produced a top lap of 1 ...

NASHVILLE, Tenn. – Ed Carpenter Racing announced Thursday that Rinus VeeKay will remain the driver of the No. 21 Chevrolet for the 2023 IndyCar Series season and beyond as part of a multi-year agreement. The 21-year-old joined ECR prior to the 2020 season and has spent the entirety of ...

MOORESVILLE, North Carolina — The winning team and driver from Saturday’s Gallagher Grand Prix NTT IndyCar Series race has been fined and penalized by IndyCar. The penalties were announced Wednesday at 4:35 p.m. (EST). According to IndyCar: The series has fined Andretti Autosport $25,000 and penalized the team 20 ...

ELKHART LAKE, Wis. – A thrilling climax to the first of three races that will comprise this weekend’s Fleet Farm Grand Prix of Road America saw Sam Corry edge out VRD Racing teammate Alessandro De Tullio by the slimmest of margins.   Just 0.030 of a second separated the pair ...

O’Ward Wins At Iowa; Newgarden Taken to Hospital After Race

IndyCar Qualifications On Hold Due To Lightning

Lundqvist To Start From Pole After Nashville Qualifying Canceled

Rosenqvist Will Remain With McLaren

The Highs And Lows Of Indy For Dreyer & Reinbold

Ferrucci To Sub For Illott In Detroit