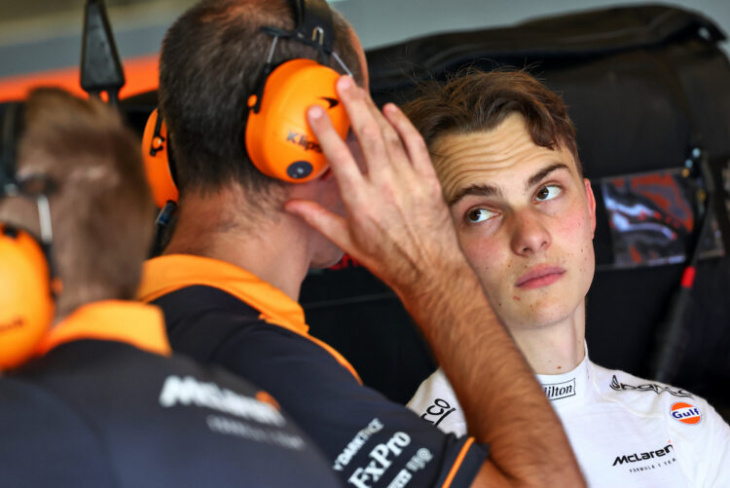 Oscar Piastri says his Formula 1 debut with McLaren in Abu Dhabi was a “pretty special” occasion, as he took to the track for the Woking-based squad for the first time.

The Australian driver will race full-time for McLaren in 2023, having been signed to the team in place of compatriot Daniel Ricciardo.

Piastri’s F1 debut has been highly anticipated given the turbulent nature of his exit from the Alpine setup, where he was a junior driver for several years.

The 21-year-old tallied 123 laps during the day, one of the highest counts in the field as he prepares for his rookie season.

“It’s a cool feeling, a very different feeling to the young driver test that I did last year [with Alpine],” Piastri said.

“I knew that was a day to have fun in an F1 car whereas this year, it’s a building block towards next year.

“But it was awesome to have my first day with McLaren, get to know everyone in the team and try and improve, get back up to speed for next year. A pretty special one.”

Piastri’s fastest lap of the test put him in 14th place at the end of the nine-hour outing.

However, he branded the lap times as irrelevant as the objective of the session was to get to grips with his new surroundings.

“That’s one of the keys of days like today – in terms of laptimes, it’s meaningless because you never know what everyone else is doing,” he said.

“That’s not the first port of call for the day, getting to know my engineers, my mechanics, everyone in the team.

“A lot of new names to learn, that’s up there with one of the most important things today especially getting into good communications with my engineers in the team in particular.

“Learning how we get feedback and what we want to adjust, getting to learn each other. That’s 100 per cent what today is about.”

Piastri will have just one and a half days to further prepare for his rookie campaign at pre-season testing next year in Bahrain.

McLaren has officially arrived in India. In the bustling heart of Mumbai city, right next to an Italian marque with a Raging Bull on its crest, at the first newly-inaugurated McLaren showroom in the country, we saw three of the current line-up the Woking-based marque has on offer. Taking the ...

Oscar Piastri will test for McLaren in Abu Dhabi on Tuesday McLaren plans to use Tuesday’s Formula 1 test in Abu Dhabi as a familiarisation session for new signing Oscar Piastri. The Australian has already completed a run in a previous-generation McLaren at Paul Ricard, with Tuesday’s outing his ...