Mathieu Jaminet had the No. 3 Corvette in his mirror throughout the closing laps in a GT-only race at VIR, but Pfaff secured the race win and, effectively, the inaugural GTD Pro championship. 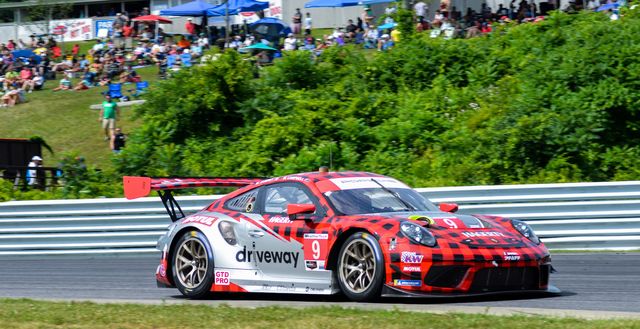 Pfaff Motorsports is having a legendary season in GTD Pro. The slowly-becoming-iconic plaid No. 9 Porsche has spent the past few seasons competing in the pro-am GTD category, but a switch from GTE rules to the GTD rule set allowed Pfaff to join the all-pro class and compete against the factory teams this season. While conventional wisdom suggested that the ambitious team would be one of many in what was expected to be the most competitive sports car class on the continent, Pfaff stepped up with four wins entering today’s GT-only round at Virginia International Raceway. At this point, it should be no surprise that drivers Matt Campbell and Mathieu Jaminet brought the win total up to five.

Jaminet led Corvette Racing’s Jordan Taylor by just a few seconds in the closing laps. With two to go, that gap was under two seconds and shrinking. Taylor never got close enough to mount a charge, allowing Jaminet to take the race win over Taylor as the No. 14 Vasser Sullivan Lexus completed the class podium. With what is now a 265 point lead over the Corvette, Pfaff will lock up the inaugural GTD Pro championship with just a start at Petit Le Mans.

In the pro-am GTD class, Winward Racing’s No. 57 Mercedes took the victory over a wild fuel mileage gamble by Heart of Racing’s No. 27 Aston Martin team. The Heart of Racing car led overall with ten minutes to go, but the desperate fuel mileage play eventually slowed driver Maxime Martin enough for Winward’s Mercedes AMG GT3 and driver Philip Ellis to catch the No. 27 and take the class win. The Aston Martin came home second before running out of fuel on the cool-down lap, enough for co-driver Roman de Angelis to take the GTD championship lead by a narrow 45 points. Bryan Sellers brought the Paul Miller Racing BMW M4 GT3 home third, enough to secure a sprint championship. Unfortunately for Paul Miller Racing, that team missed the Rolex 24 at Daytona and is not in contention for the season-long GTD title.

Both GTD classes will decide their titles at Petit Le Mans in a month. That will also be the championship-decider in LMP3, LMP2, and DPi. Finally, it will be the last-ever race for the DPi class before it is replaced by the modern incarnation of GTP, a class built from the combination of the new LMDh rule set and the LMH rules currently used in Europe’s top sports car class.