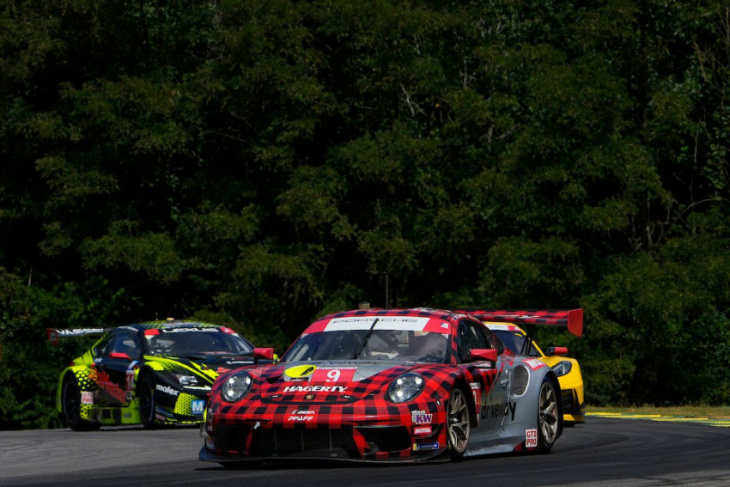 Everything is coming up plaid for Toronto-based Pfaff Motorsports and drivers Matt Campbell and Mathieu Jaminet. The team, whose red livery design comes from plaid winter jackets commonly worn in Canada, gambled and won on a late-race fuel strategy with their 911 GT3R at VIRginia International Raceway. On a sweltering summer day, the winning factory Porsche drivers all but clinched the WeatherTech Championship in GTD Pro with one race remaining.

The runner-up Corvette Racing entry of Andy Garcia and Jordan Taylor tried a different fuel strategy, gambling on a short stop in the first round of re-fueling to gain track position with an eye on managing tire wear on the 90-degree day. But a full-course caution negated their 10-second lead. Taylor closed to within 0.8 seconds at the finish, when Jaminet gave up much of his leading margin to conserve fuel over the last two laps. The Frenchman ran out on his cool-down lap and was pushed into Victory Lane.

“We pulled that one off on strategy, running out of fuel there on the in lap,” said Campbell. “It was a crazy race but we got another win in the end.”

The final pit stop strategy made the difference for Pfaff, said Jaminet, who struggled with handling after the decision to take only two rear tires and take the minimum amount of fuel. But he had enough margin to cruise over the final two laps in fuel-saving mode. “The car was super hard to drive,” he said. “I had to push flat out, but we were pretty tight on fuel at the end, so we had to make some quite big (fuel) saving over the last two laps. It was a good calculation from the boys. We maximized everything.”

On a weekend when there were often cars running into the grass surrounding the bucolic and slippery 3.27-mile course, the Lexus RC F GT3 of VasserSullivan ran cleanly to a third place for Jack Hawksworth and Ben Barnicoat. But their Pro class entry trailed six of the GTD entries due to pit strategies during the two-hour, 40-minute sprint and finished ninth overall.

The 10-hour Petit Le Mans at the Michelin Raceway Road Atlanta will be the final event of the 10-race GTD Pro schedule. With only four other contending teams and a commanding lead, Pfaff need only score last-place points to finish ahead of the Corvette drivers and Barnicoat. 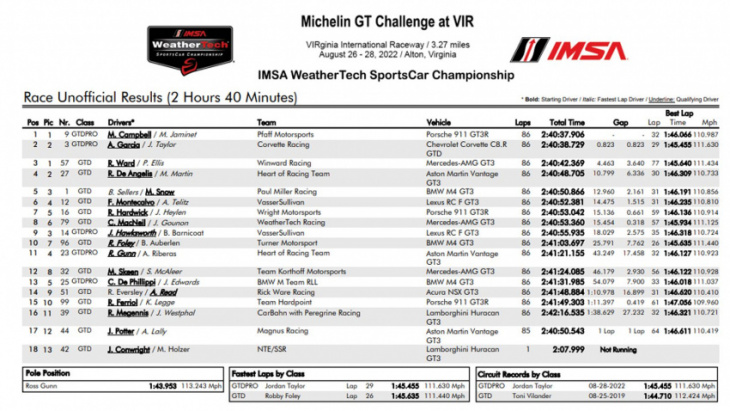 COMPLETE RESULTS FROM IMSA AT VIR 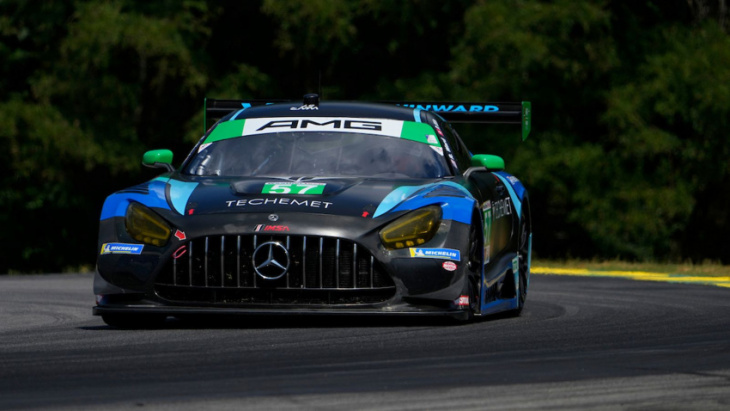 The No. 57 Winward Racing Mercedes AMG took the checkers at VIR in GTD.

On a wild day for Windward Racing, drivers Russell Ward and Philip Ellis joined the crowd in contention for the GTD title of the WeatherTech Championship with a second straight victory on board their Mercedes AMG GT3.

After Ward put the car on the class pole and at the front of the 12-car GTD field, a malfunctioning air gun on the first pit stop cost track position. Ellis careened into the grass and gathered a trackside banner fighting for position in the Esses versus the Aston Martin of Maxime Martin. Windword rebounded by reeling in the GTD leaders and taking a late fuel stop with eight minutes remaining.

Managing tires was the key. “It was just a rocket ship, especially on old tires,” Ward said. “It really lasted the whole stint. My stint was just to try to keep it in a safe position, be conservative with the car and the tires and make sure I handed it over to Philip in the same position. We all performed incredibly.”

Ellis’s yeoman stint at the finish included a final pass for the lead of Martin, trying to stretch fuel mileage and give the Heart of Racing Team a third GTD victory this season. As it was, the Aston, started by Romain De Angelis, was the only car to finish the race on just three fuel stops.

The points leader coming into VIR, Stevan McAleer fell out of contention when a loose wheel on his AMG GT3 forced an unscheduled pit stop that left him a lap down. Teammate Mike Skeen helped the team recover to eighth-place finish in class.

Headed into the Petit Le Mans, a bevy of drivers are in contention, led by De Angelis after the risky fuel gambit pushed him past Porsche drivers Jan Heylin and Ryan Hardwick and ahead of McAleer in the standings. 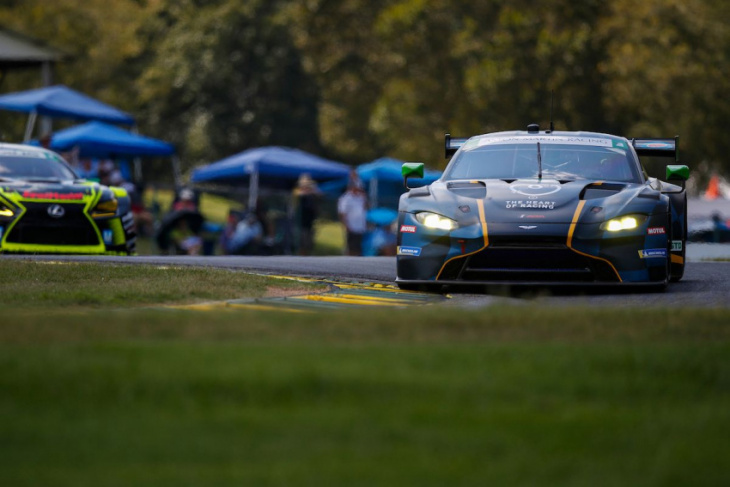 Everrati has added the convertible version of the 964-generation Porsche 911 to its growing fleet of electric conversions. But rather than stick with the regular body, Everrati also added the car’s wide-body design for some extra drama, not to mention extra performance. With up to 500 hp available, wide ...

The new feature is being rolled out in Germany, with other countries to follow.


View more: Porsche Configurator Now Allows You To Spec Your Car And Order It Online

What company created this car paint job? How was this car paint job created? How can a brush-painted finish be so smooth? Is the cabin modified? At first, it is hard to imagine someone painting a 2018 911 Porsche Turbo with a brush, but that’s what you’re looking at. ...

What is it? What’s its superpower?  Let me guess, it’s got monster power too? Presumably some lightweighting has occurred? What about the way it looks? What's the verdict? What is it like to drive? The conditions? That sounds hugely complicated. Did the track dry out? And the brakes? And ...