Pfaff Motorsport comes out on top at VIR 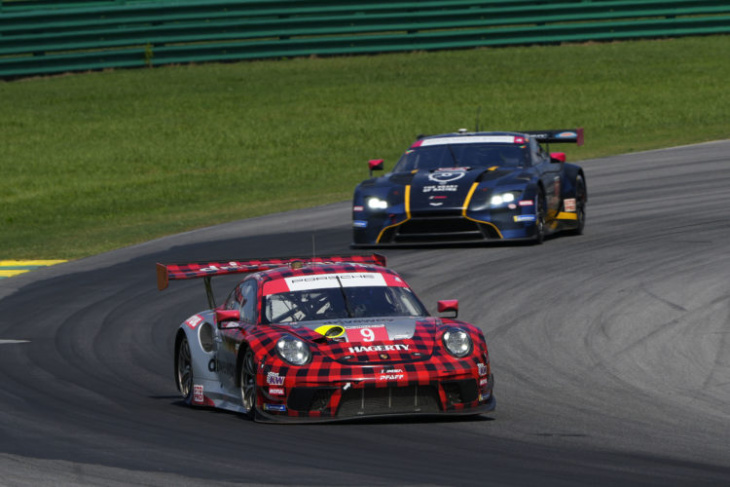 Racing got underway today at Virginia International Raceway for the last GT challenge, and second to last race of the 2022 IMSA season. Mathieu Jaminet and Matt Campbell came out on top in the end with the #9 Pfaff Motorsport entry tearing through the field and fending off a hungry Jordan Taylor and his #3 Corvette at the end of the race. GTD was won by Phillip Ellis and his #57 Winward Racing machine alongside teammate Russel Ward.

While the #57 started the race on GTD Pole, that does not tell the full story. It came down to a fuel battle near the end with many drivers, trying Hail Mary fuel stints to the end and all but one paying off. The #27 Heart of Racing GTD machine crossed the line on fumes after a long last stint and massive fuel save by Maxime Martine and Roman De Angelis paid off to a P2 class finish.

The #27 Heart of Racings GTD Pro counterpart, the #23 Heart of Racing entry, tried a similar run but was forced to pit in the waning minutes of the race to make it to the end. Starting on pole, the #23 got off to a commanding lead to begin the race, fending off jabs from the #9 and #3 on either side on the opening laps.

But the #23 crew was handed down a drive-through penalty for working outside the pit box area on a yellow flag pit stop an hour into the race. This put the car on an off strategy so while they lead a lot of laps in the last stint, they were forced in for a splash and finished fourth in class.

The race was relatively incident free compared to other IMSA races this season with only one yellow on the day. The sole condition came in response to debris on the track after the #57 took an advertising board on a ride, the yellow was thrown with an hour and twenty minutes left.

The pit cycle after the yellow saw Andy Lally in the #44 Magnus Racing entry take the overall lead. He would eventually pit but due to a puncture on the out lap, would fall a lap down at the end of the race.

While the GT Challenge at VIR may not have been the most exciting race of the season, it leaves the championship table for both classes in an interesting spot going into Petite Le Mans. The #9 Pfaff Motorsport entry has the GTD Pro championship all but locked down for the season, but the GTD championship is still anyones game.

IMSA returns for the season finale on October 1st at Road Atlanta for the 10-hour full class endurance race.

Keyword: Pfaff Motorsport comes out on top at VIR