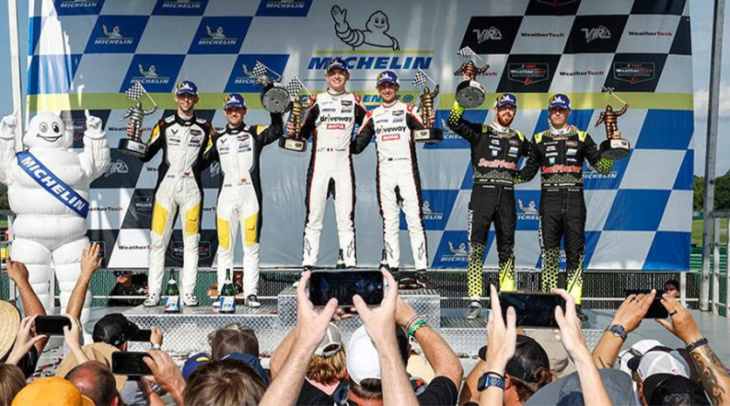 ALTON, Va. – With a GTD class car playing the fuel strategy game in front of him, fuel mileage concerns of his own and a rival GTD PRO competitor closing quickly, Mathieu Jaminet had his hands full Sunday in the closing stages of the Michelin GT Challenge at VIR.

But the 27-year-old Frenchman handled the pressure with aplomb as he guided the No. 9 Pfaff Motorsports Porsche 911 GT3 R that he shared with Matt Campbell to the GTD PRO and overall victory in the two-hour, 40-minute IMSA WeatherTech SportsCar Championship event at VIRginia International Raceway.

After making a final pit stop for fuel and rear tires, Jaminet had to balance managing his fuel with the aggression he needed over the last 50 minutes to chase down not only the GTD PRO class-leading No. 23 Heart of Racing Aston Martin Vantage GT3 driven by Alex Riberas, but also the Heart of Racing’s No. 27 GT Daytona (GTD) entry, which held the overall lead but was on an even more extreme fuel-saving strategy.

Jaminet passed Riberas for the GTD PRO lead with approximately 15 minutes remaining, then overtook Maxime Martin in the No. 27 for the overall lead 10 minutes later. But the drama wasn’t over for the Pfaff Porsche in the quest for its series-best fifth win of the season. Jordan Taylor, who had built an 11-second lead early in the race in the No. 3 Corvette Racing Corvette C8.R GTD co-driven by Antonio Garcia, closed to within 0.823 seconds at the checkered flag.

Ben Barnicoat and Jack Hawksworth finished third in GTD PRO in the No. 14 Vasser Sullivan Lexus RC F GT3, 18.029 seconds behind the winners. Riberas and Ross Gunn, who claimed the Motul Pole Award, made a late stop for fuel and finished fourth in the No. 23 Aston Martin.

How precise was the Pfaff team’s fuel calculation? The “plaid Porsche” ran dry on the cooldown lap and needed to be pushed to victory lane.

“We pulled that one off on strategy, running out of fuel there on the in lap,” Campbell said following his 10th career IMSA win. “It was a crazy race but we got another win in the end.”

Campbell and Jaminet now lead the GTD PRO championship by 265 points over Garcia and Taylor, who moved ahead of Barnicoat and Hawksworth (minus-281 points) for second with only the Motul Petit Le Mans at Michelin Raceway Road Atlanta remaining on Oct. 1. With a maximum of 385 points available in the season finale, the title is almost guaranteed.

“Obviously, it was super tight when guys went on different strategies,” said Jaminet, who now has seven career victories. “Only taking rear tires like we did is not very common and the car was super hard to drive. I had to push flat out, but we were pretty tight on fuel at the end, so we had some quite big saving over the last two laps. It was a good calculation from the boys; we maximized everything.

“Super happy for the team,” he added. “Fifth win of the season and the championship is pretty much done. I think all the objectives are achieved, so now we go to Petit Le Mans to push hard and win one more.”

Garcia and Taylor were aiming for their third consecutive victory at VIR, the last two coming in the erstwhile GT Le Mans (GTLM) class. The Corvette was the first entry to pit for fuel and a driver change, putting them in a comfortable lead that was eliminated by a full-course caution just before they were planning to make their next pit stop.

“We called the strategy well at the beginning and jumped ahead,” Taylor said. “If the race had gone green (to the finish), we would have maintained that track position, but the yellow kind of killed it. The car felt good, it’s just frustrating to come up a little bit short again.”

Pendulum Swings in Favor of No. 57 Winward Mercedes in GTD

For Philip Ellis, patience was the key. 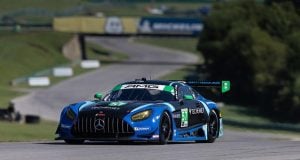 The No. 57 Winward Mercedes recovered to win in GTD. (IMSA Photo)

Ellis chased down Maxime Martin and passed him with two minutes remaining to win a back-and-forth battle in the GTD class and score an atypical pole-to-checkers victory.

Ellis pressured Martin after surrendering the lead for a splash-and-go pit stop with eight minutes remaining in the two-hour, 40-minute race. Then, as Martin saved fuel to try to get to the finish, Ellis caught him for the lead.

The win by the No. 57 Winward Racing Mercedes-AMG GT3 came in spite of a problem during the first pit stop and a brief run off course by Ellis.

“Luckily, nothing damaged the car,” Ellis said. “We still had a good car at the end. We were a bit unfortunate with the track position, of course, and we had to manage a lot.”

It was the second consecutive victory for Winward Racing, which won earlier this month at Road America. On Saturday, co-driver Russell Ward won the Motul Pole Award for the GTD class.

“It was just a rocket ship, especially on old tires,” Ward said. “It really lasted the whole stint. My stint was just to try to keep it in a safe position, be conservative with the car and the tires and make sure I handed it over to Philip in the same position. We all performed incredibly.”

Ward led the first 26 laps before the issue in the pits set the No. 57 back in the 13-car GTD field. With 53 minutes left, Bryan Sellers put the No. 1 Paul Miller Racing BMW M4 GT3 he shared with Madison Snow into the lead. Thirty minutes later, after Sellers pitted, Aaron Telitz briefly took the lead in the No. 12 Vasser Sullivan Lexus RC F GT3 he co-drove with Frankie Montecalvo.

With 19 minutes left, Ellis found himself in the lead again when Telitz pitted, setting the stage for the late-race seesaw battle between Ellis and Martin in the No. 27 Heart of Racing Team Aston Martin Vantage GT3. Ten minutes later, Martin took the lead when Ellis made the stop for the fuel splash. But, as Martin was forced to save fuel, Ellis was able to chase him down and regain the lead as the clock ticked down.

The victory helped Ward and Ellis move into to fourth place in the WeatherTech Championship GTD driver standings with only the Motul Petit Le Mans on Oct. 1 at Michelin Raceway Road Atlanta remaining on the 2022 schedule.

“We had such hard luck at the beginning of the year,” Ellis said. “We always had the pace, and now we always have the pace as well. Even today we didn’t have the best of luck when the air bottle fell. So that threw us all the way to the back of the field. From there it was a really tough fight.”

Martin held on to second place in the No. 27 Aston Martin despite running 40 laps during his final stint. The finish helped his teammate, Roman De Angelis, take the lead in the GTD drivers’ standings over Stevan McAleer, who finished eighth in the No. 32 Team Korthoff Motorsports Mercedes-AMG GT3 he co-drove with Mike Skeen.

De Angelis leads McAleer by 45 points heading to the finale, with Ryan Hardwick and Jan Heylen, co-drivers of the No. 16 Wright Motorsports Porsche 911 GT3 R, in third place, 57 points behind De Angelis.

“We got a podium; it’s a good day,” Sellers said. “We were able to wrap up the Sprint Cup championship and take a trophy home, so it’s great. But I felt like today we should have had more.”