While some manufacturers, such as Nissan and Renault, believe electric cars should look a little different, Peugeot thinks choosing between petrol, diesel or electric should be as normal as choosing a trim level. That's why the fully electric Peugeot e-208 was launched at the same time as the petrol and diesel models, offers the same trim levels and looks nearly identical.

For the 2022 model year, Peugeot made the electric powertrain more efficient, resulting in a rise in range from 217 to 225 miles. The Allure trim level was also discontinued, but two versions still qualified for the plug-in car grant before it was discontinued. In 2023 the e-208 is set to undergo even bigger changes, with a new battery pack and electric motor boosting its range further to 248 miles.

The Peugeot 208 is a firm family favourite and a fully electric version of it is yet another indication that electric motoring is becoming increasingly mainstream. The only ways you'll be able to spot the difference are a blue lion badge, some body-coloured flashes on the grille and the e-208 badge – until you pull away in near-silence, of course. While the Renault ZOE, one of the e-208’s main rivals, has long been among the most attractive small EVs, the e-208 is arguably even more stylish. It avoids the ungainly tall stance of many electric cars, and is one of the most sporty to look at as a result.

This theme continues inside the e-208, where the low-slung driving position faces digital '3D' instruments and a small steering wheel that looks like it's been borrowed from a racing car. There's a youthful appeal, backed up by soft, sophisticated materials inspired by successful models like the Peugeot 3008.

Under the bonnet, a 134bhp electric motor gives the e-208 a real turn of speed, and it feels even quicker than its official 0-62mph time of 8.1 seconds suggests. In Sport mode, it's noticeably more potent than the ZOE, which may have been tuned with more economical driving in mind. The e-208's 225-mile driving range is slightly less than the 245 miles the ZOE can manage, but this will be addressed by the new battery pack for the 2023 car and is still more than what you’d get in a MINI Electric or Honda e. The e-208 also boasts faster 100kW charging than the ZOE, making it possible to add 100 miles of range in 20 minutes. 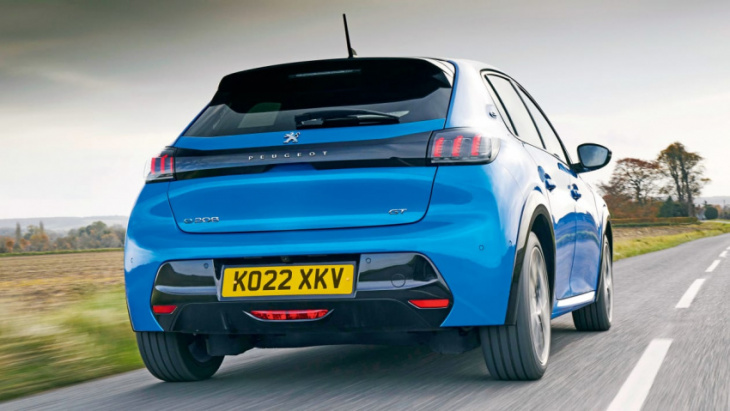 The Renault ZOE has had the small EV market wrapped up for a while but it now faces increasingly stiff competition. The Peugeot e-208 was its first stern test, and with stylish looks, an exuberant character and a greater four-star Euro NCAP safety rating than the Renault, it's sure to win favour with some buyers.

The Peugeot e-208 is available with one battery, a 50kWh unit that can deliver a driving range of up to 225 miles. On our test drive, we found a range of 200 miles is realistic in summer conditions, which should translate to around 150 miles in winter or on a high-speed motorway drive. That should be more than enough for most drivers, but the latest Renault ZOE does pip the e-208 with its range of up to 245 miles.

This advantage is set to change in 2023, however, with the release of a new battery pack and electric motor for the e-208. Taken from the larger Peugeot e-308, the new 51kWh (48.1kWh usable) battery boosts range to an impressive 248 miles. While this won’t necessarily be a big advantage for local trips, it should make longer drives more convenient with fewer chargings stops. 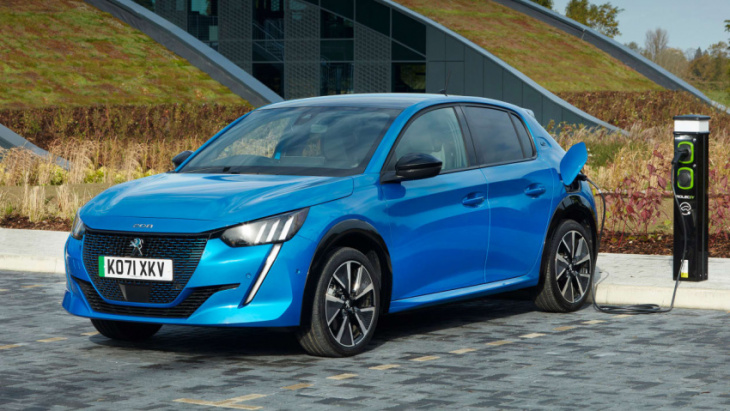 The Peugeot also beats the ZOE when it comes to charging, thanks to its 100kW rapid-charging capability, which is double that of the Renault. Find a charger running at 100kW and it'll add 100 miles of range in just 20 minutes – the larger 2023 battery can be topped up from 20-80% in as little as 25 minutes. More common 50kW charging posts will do the same in 40 minutes, while a 7kW home wallbox can fully charge the e-208 in under eight hours. The CCS and Type 2 charging ports are hidden behind a flap on the rear wing. It's worth noting a standard three-pin cable costs extra, but charging from a standard socket will likely take too long for many owners.

Road tax for EVs is free, and Benefit-in-Kind taxation for company-car drivers has also been reduced to almost nothing, resulting in big potential savings.

Unlike the ZOE that's offered with two power outputs, the Peugeot is available with just one 134bhp electric motor. It actually makes the e-208 the most powerful in the entire 208 range, and it feels very quick off the mark, accelerating from 0-62mph in 8.1 seconds. It's faster and more lively than the top-spec R135 ZOE, especially in its Sport driving mode.

Along with the bigger battery, power is set to increase to 154bhp as part of the e-208’s updates for 2023. It’s a 15% boost, and while we haven’t tried it yet, we expect the extra punch will be felt most at higher speeds, such as when passing slower traffic on the motorway.

We still find Peugeot's small steering wheel polarising, but there's no denying it makes the e-208 feel alert in town and on country lanes. In equal measure it can be less intuitive when manoeuvring. Back off the e-208's accelerator at speed and there's a mild braking force as the electric motor harnesses kinetic energy to top up the batteries. It's been programmed to feel as natural as possible to avoid putting off EV newcomers, but nudge the gearlever into 'B' mode and the regenerative braking force increases noticeably, so you won't have to use the brake pedal very often in routine driving.

The e-208’s interior is a real highlight, with a modern mixture of tactile materials and technology. A seven-inch infotainment display and digital instruments are standard, with Apple CarPlay and Android Auto compatibility thrown in for good measure. A 10-inch version of the central screen comes with the GT model upwards, bringing improved graphics and sat-nav with live traffic updates. The infotainment software can be confusing, but there's no arguing with the level of kit on offer, especially from Allure Premium trim, which includes wireless smartphone charging and '3D' instruments. 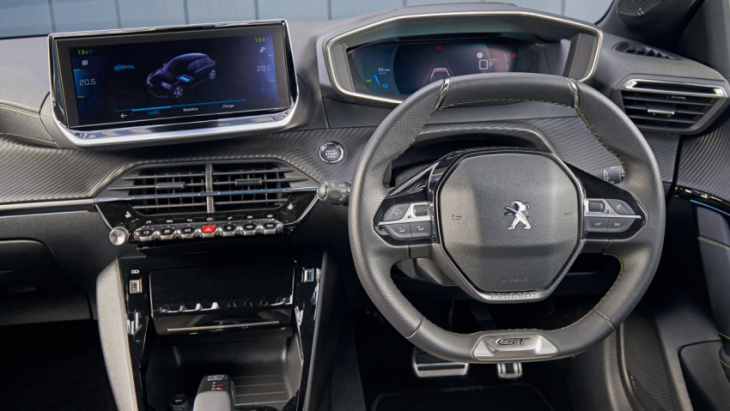 One fly in the ointment is ride comfort; our first experience of a top GT Premium model fitted with 17-inch alloy wheels exposed the car’s fairly restless ride. It settled down at higher speeds and proved relaxing on the motorway, but we'll need to try an e-208 on smaller wheels in the UK to reach a final verdict on comfort. There was a surprising amount of tyre noise too, but the electric powertrain still makes the e-208 a refined car compared with petrol rivals.

The Peugeot 208 range has been built on a new supermini platform that was engineered to accommodate petrol, diesel and fully electric powertrains. Called the ‘Compact Modular Platform’ (CMP), it's shared with the Vauxhall Corsa Electric and means that adding a 50kWh battery pack to the car doesn't cut into passenger or luggage space. Instead the batteries are distributed under the car floor and the rear seats, but, like the petrol 208, the Peugeot trades some interior space for its small and stylish dimensions. The boxier Volkswagen Polo has more space for tall passengers in the back. 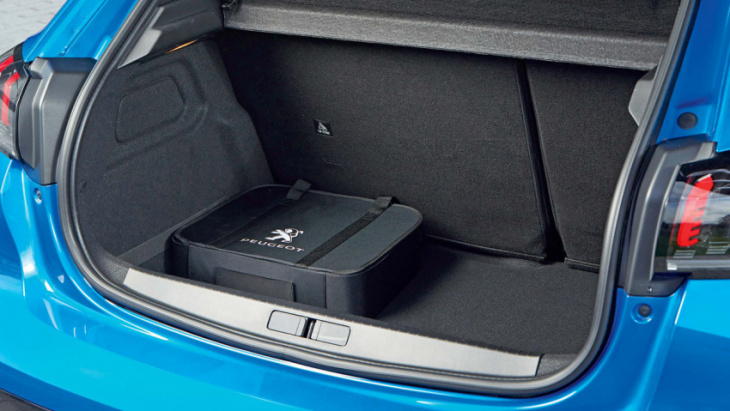 Boot space measures 311 litres, rising to 1,106 litres with the rear seats folded down, which is about average for the supermini class. The ZOE can hold slightly more at 338 litres, partly thanks to its taller stance. There's also one big oversight, and that's a lack of a space dedicated to storing the charging cable or a space-saver spare wheel.

Peugeot has produced a string of five-star Euro NCAP cars, but the 208 and e-208 achieved a four-star score, despite coming with more safety kit than ever before. This is partly because of safety testing becoming much tougher – the Renault ZOE scored zero stars when it was re-tested by Euro NCAP in 2021. The Peugeot still offers plenty of driving aids though, with features that help keep the car in its lane on the motorway, brake automatically in an emergency and monitor the driver for signs of drowsiness. 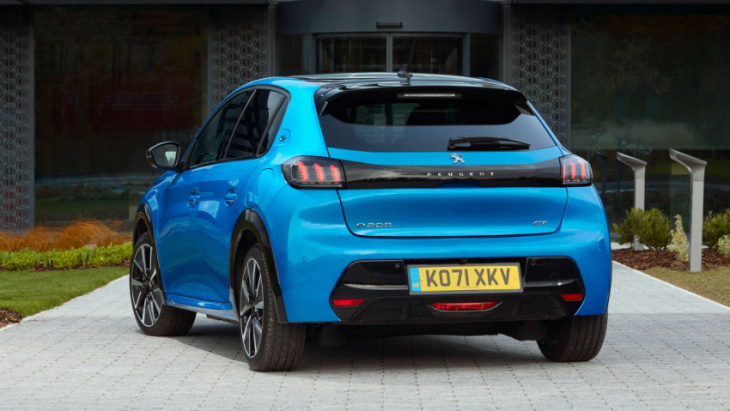 Reliability will take longer to judge because while there's theoretically much less to go wrong with an electric powertrain (and far less to maintain) this is Peugeot's first mainstream EV. Any issues are likely to be with teething problems and electrical gremlins. In our 2022 Driver Power brand survey, Peugeot finished in an impressive fourth place, up from 11th place out of 29 manufactures in 2021. A reasonably low 17.6% of Peugeot owners reported a fault with their cars in the first year. Overall, the 208 finished in 37th place in our top 75 cars list for 2022, with excellent results for its engine and gearbox, ride and handling and running costs. It was also given a good rating for reliability and build quality.