The French sedan gets a new nose. 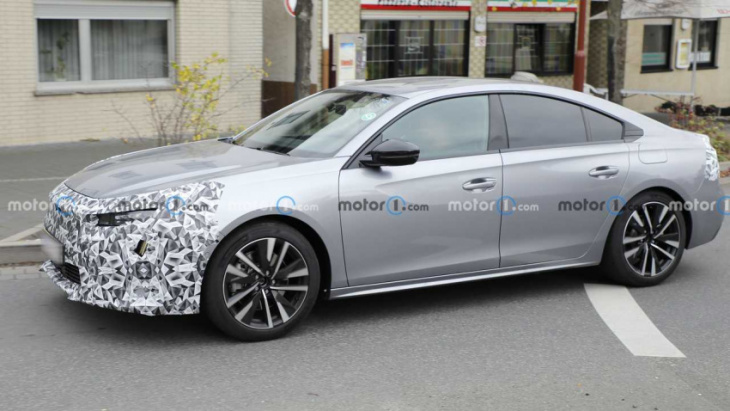 The Peugeot 508 is the largest sedan in the French brand’s current lineup. A styling update is currently under development, and these spy shots are our first glimpse at the changes.

The camouflage on the nose seems to conceal a new design for the headlights. They appear to be narrower, but the vertical portion on the outer edge is still present. A wide, trapeziodal inlet occupies the lower fascia. The body wrap completely hides the grille, so it’s impossible to see the styling changes.

Along the side, one of these cars has an antenna next to the B-pillar. A small, circular device is on the roof. These pieces might hint at the 508 having some mechanical tweaks. If the team is only making aesthetic changes, this equipment doesn’t seem necessary.

There’s more camo on the rear deck. The taillights have new graphics, but the covering hides whether there are changes to their shape.

The gallery also includes a single image of the 508 wagon. Like the four-door, there are changes to the nose and taillights.

There aren’t photos inside of these vehicles. Our spies report that the new infotainment system is new and has an updated interface. Tweaks to the cabin trim are also possible.

Following the launch of the latest generation of 508, Peugeot launched the Sport Engineered performance model. It has a turbocharged 1.6-liter four-cylinder with two electric motors. The total system output is 355 horsepower (265 kilowatts) and 384 pound-feet (520 Newton-meters) of torque. The model hits 62 miles per hour (100 kilometers per hour) in 5.2 seconds and has an electronically limited top speed of 155 mph (250 kph). The 11.5 kilowatt-hour battery provides 26 miles of electric range in the WLTP evaluation.

For a while after FCA and PSA merged to become Stellantis, there was a rumor about Peugeot returning to the United States. The 508 was reportedly among the products that were going to be part of the American lineup.

However, Stellantis changed its strategy. Instead, the company decided to focus on growing Alfa Romeo in the US, rather than trying to launch a new brand in the country.