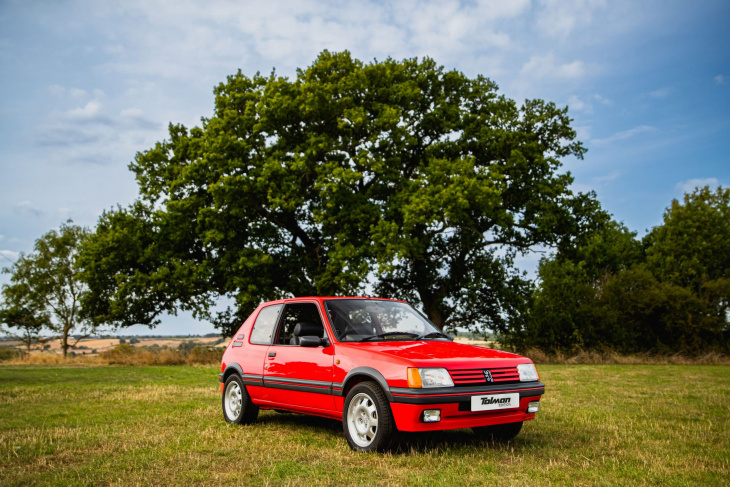 Peugeot’s well-loved 205 GTI has been given a modern-day update, ‘reimagining’ this iconic 1980s hot hatch.

Courtesy of restoration specialists Tolman Engineering, the 205 GTI has been enhanced with a number of modern upgrades, with the first customer ‘Tolman Edition’ now being revealed.

The firm says it bolsters the model with ‘contemporary performance, reliability and convenience features to enjoy driving it today and every day’.

Customers are able to choose between 1.6- and 1.9-litre engines, with this first customer car being the latter, and has been upgraded to offer more low-down torque and a revised cylinder head and new cams.

The result being more than 200bhp – a sharp increase on the 130bhp the 205 GTI came with from the factory.

A revised throttle is also said to offer a keener response along with improved starting in hot and cold conditions, while a Tolman exhaust and Quaife differential have been fitted to enhance the way the 205 drives.

Modern convenience features are also available, including LED lighting, an LCD dashboard and an integrated infotainment system with Apple CarPlay and Android Auto. Customers can also have the seats retrimmed, electric windows fitted and an Alcantara steering wheel to give the Peugeot a sportier feel.

Chris Tolman, founder of Tolman Engineering, said: “Back in the ‘80s and ‘90s, for me and I’m sure many others, 205 GTIs were a first taste in performance cars; something rewarding, responsive and engaging.

“We wanted to recreate that feeling of being at one with the road, a car you can just jump in and simply enjoy driving hard. Current hot hatches surpass these cars in so many areas but despite having loads of power and incredible dynamics, they fail to rekindle that emotional involvement that made us feel special with the 205.”

The Warwickshire firm says it has access to a number of donor 205 GTIs in both left- and right-hand-drive, or customers can use their own cars, and that all upgrades can be reversed and put back to standard. After this, Tolman says 700 hours are spent modifying the car with both performance and convenience updates.

This stunning Laguna Blue C2 was picked up for a fantastic price and it was close to home, too. While there is a wealth of useful information and interesting debates present in the Corvette Forum forums, we must say that our favorite thing about sifting through the site is ...

The Geely brand Geometry has launched two new electric models in China. These are the G6 sedan and the M6 SUV, both of which start at a base price of 149,800 yuan (approx. 20,250 euros) after subsidies. Both models produce 150 kW and are offered with two battery options ...

Georgia State Trooper Seen In Smokey and the Bandit Passed Away