Part of a Toyota Plant Evacuated, Leaving One Person Hospitalized

Toyota is committed to safety at its manufacturing facilities, but a Toyota plant recently experienced an accident that resulted in at least one person being hospitalized. The accident occurred at a Toyota plant in Georgetown, Kentucky. The incident resulted in part of the facility being evacuated.

Toyota has plants across the United States 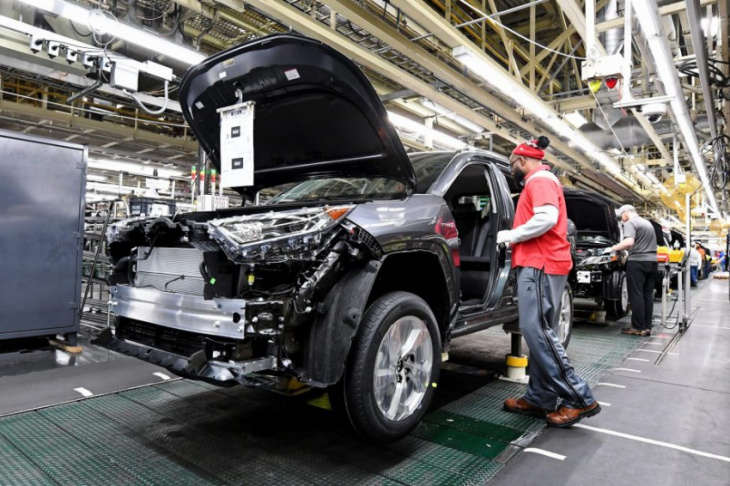 Toyota Motor Manufacturing of Kentucky was the site of the accident. According to Toyota, this Kentucky plant is the company’s largest production facility globally. The plant has been used for vehicle production since 1988.

The Kentucky Toyota plant predominantly produces the Toyota Camry and the Camry Hybrid. Toyota employs over 9,300 full-time employees at the plant across different departments.

Georgetown, Kentucky is just one of 10 locations in the United States with a Toyota plant. Toyota states that the company has produced vehicles in the U.S. for 35 years, and the plants collectively produce more than a million vehicles a year.

Why the Kentucky Toyota plant was evacuated

On Monday, August 15, the Kentucky Toyota plant experienced a hazmat incident due to a potentially dangerous mixture of chemicals. WKYT states that this happened in a paint section of the facility where nitrous oxide mixed with phosphorus after a tank and truck were incorrectly hooked together. When combined, these two chemicals produce a gas known as nitric acid, which can cause breathing issues and skin irritation in humans.

Two hundred people were in the paint area of the plant when the incident occurred. Two were taken to a hospital. This seemed to have been done as a precaution, and there were no other injuries. Only this area of the plant was evacuated, as the gas did not pose a risk to other parts of the facility.

To combat the chemical contamination, a hazmat team and fire department personnel used 3,000 gallons of water to clean out the tank with the two combined chemicals. This accident also posed no risks to the public, as the nitric acid turned back into its base elements after exposure to the air. Due to the decontamination efforts, shifts at the plant were slightly delayed, but there have been no reports of further issues.

While this accident was a shock for those involved, it is an outlier in Toyota’s safety-focused plants. As part of the company’s philosophy, Toyota emphasizes its emphasis on employee safety as one of the company’s core values. Placing employees in a safe environment and predicting the risks of each stage in production helps to maintain Toyota’s reputation for safety.

At the Kentucky Toyota plant, the nitric acid incident was an exception rather than the standard for the safe facility, and the company’s quick and effective response limited the potential dangers of the accident. Toyota even consulted with an environmental group to ensure that the contamination had been completely dealt with before operations returned to normal.

This accident highlights some of the inherent risks associated with a vehicle production plant. Even when safety is the top priority and safeguards are in place to prevent accidents, incidents like this can happen. In this case, it thankfully was able to be handled quickly, and the risk to employees was thankfully relatively low.