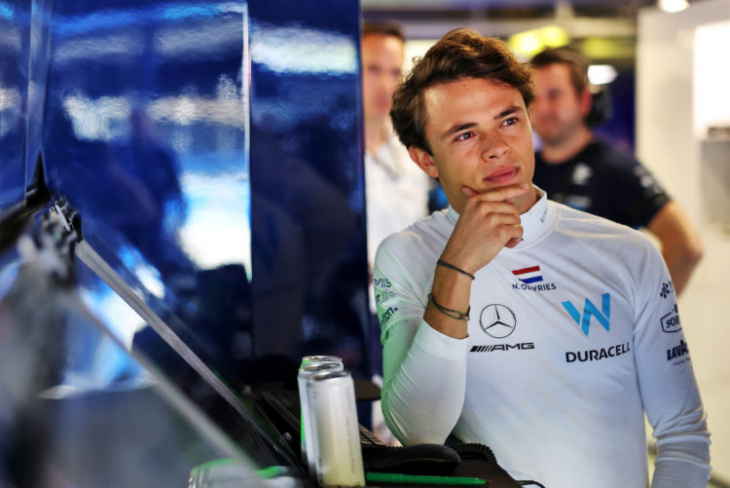 De Vries was a late call-up by Williams at the Italian Grand Prix after Alexander Albon fell ill.

The Dutchman had an admirable outing in qualifying, while in the race, he crossed the line in ninth place to secure two points.

De Vries has been linked to a full-time F1 switch for the 2023 campaign, potentially at Williams in place of Nicholas Latifi.

However, Palmer believes that it will be more than Williams that will look to take the 27-year-old on board for next year.

Has Herta earned the right to enter F1?

Vettel to compete at 2023 Race of Champions following F1 exit

“Alex Albon has been putting in stellar drives all season at Williams and de Vries’ Monza effort was Albon-esque in its delivery,” Palmer wrote in a column for Formula1.com.

“Relatively understated, but by plugging away the result turned up at the end, made all the more impressive by it being a debut.

“Surely for Williams now, the prospect of having two potential point scorers will be too appealing to turn down for 2023.

“But it won’t just be them that are keen on de Vries’ signature now.

“The rise in fortunes for the former F2 champion couldn’t have been clearer after a wonderful cameo which showcased his ability.

“Any reserve driver outing is an opportunity, and Nyck de Vries grabbed it with both hands in Monza.”

Where next for de Vries, if not Williams?

Although de Vries has been heavily linked with Williams, there could be other opportunities for the 2019 Formula 2 Champion on the 2023 F1 grid.

Alpine currently has a vacancy for the 2023 campaign, with Fernando Alonso leaving the team at the end of the year.

The Enstone-based squad has highlighted that it is keen to take an experienced driver, rather than a rookie, however de Vries displayed in Italy his ability to rapidly adapt.

The same situation exists at Haas, with team boss Guenther Steiner asserting that it would prefer if Kevin Magnussen’s team-mate in 2023 has F1 experience under their belt.

Alfa Romeo has not yet confirmed who will drive alongside Valtteri Bottas next year, however it is believed that Zhou Guanyu will be retained following a solid rookie campaign.

Therefore, it would appear that Williams is de Vries’ best bet to be on the grid full-time in 2022 season.

De Vries has experience working in the same team as Albon – in 2016, they were ART Grand Prix team-mates in GP3, with current Ferrari F1 driver Charles Leclerc also part of the team.