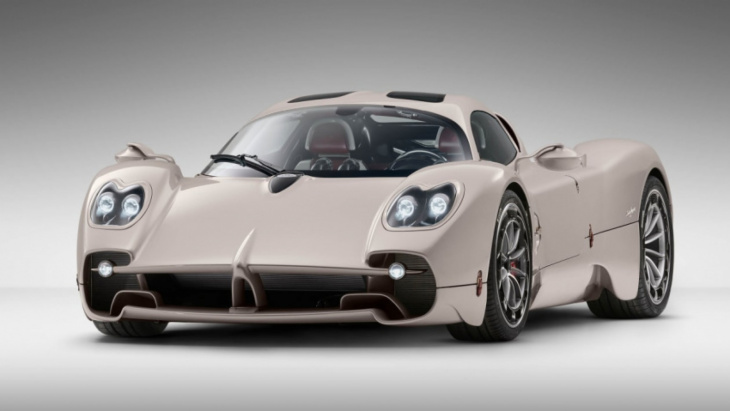 Pagani has revealed its latest supercar, the new Utopia. It features the same twin-turbocharged V12 as the Huayra, albeit with more power. It uses a manual gearbox only, forgoing the option of an automatic transmission.

At a typically grandiose event, the Italian marque’s founder, Horacio Pagani oversaw the unveiling with the Symphonic Orchestra of the Milan Conservatory providing the background soundtrack.

Pagani also provided a video to accompany the event which showed Horacio looking around the new car’s details – many of which have been clearly influenced by previous Pagani supercars.

We’ve seen leaked images of the Utopia before, which was codenamed ‘C10’ by Pagani (the Zonda was internally known as the ‘C8’ and the Huayra was codenamed ‘C9’). From the outside, we can see typical Pagani design cues such as the covered headlights, recessed bonnet, circular rear lights and of course, the quad-exhaust arrangement.

The overall look of the Utopia is certainly less aggressive than previous Paganis, but there’s plenty of clever aerodynamic work here. While it goes without the braking flaps seen on the Huayra’s bonnet, air is channelled through the lower grille over the windscreen to promote stability. The rear wing also features active aero flaps which can tilt depending on how much downforce is needed. 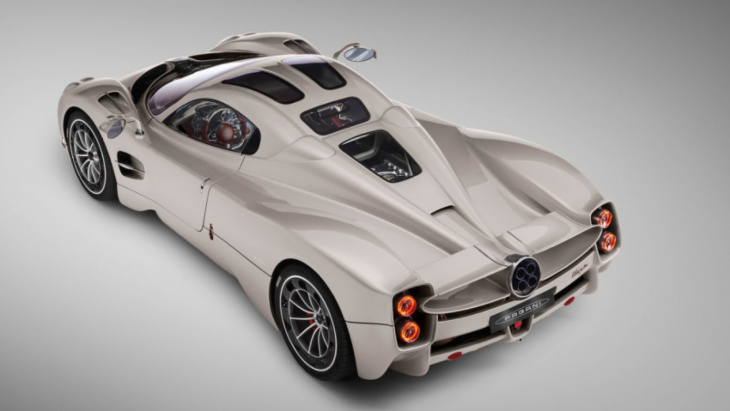 Sitting beneath the monocoque body made from a mix of carbon and titanium (Pagaini calls it carbotanium) is a 6.0-litre, twin-turbocharged V12. It produces 864bhp in the Utopia, which is 85bhp more than the most powerful version of the Huayra – the NC. There’s also 1100Nm of torque available from 2,800rpm to 5,900rpm.

The power from the engine, sourced from Mercedes-AMG, is sent to the rear through an Xtrac seven-speed automated manual transmission or pure manual with an ‘electro-mechanical differential’.

The suspension is made from a forged alloy, with double wishbones and semi-active shock absorbers. Different driving modes can change how firm the damping is, too. As you’d expect, the brakes are equally impressive. There are gigantic 410mm discs with six-piston Brembo calipers at the front with four-piston calipers to the rear. These are just about visible behind the aerodynamically tweaked 21-inch front and 22-inch rear wheels.

The extensive use of carbon fibre and lightweight materials for the Utopia means it’s light. It weighs just 1,280kg – just over 100kg lighter than the recently revealed Koenigsegg CC850. The Utopia will be slightly more common than its Swedish rival however, with 99 units planned to the Koenigsegg’s 70. In any case, the Utopia is sold out already.

Pagani has referred to the Utopia as the ‘coupe’ model, and given the firm’s penchant for extending its model range, we can see a few Utopia variants down the line.

Now read our list of the Best V12 engined cars…

Despite a power advantage of nearly 150 hp, the electrified Utopia would've been slower due to a higher weight.

Hybrid Apparently AMG offered its twin-turbo, twin e-motor GT 63 unit for Pagani's latest hypercar Horacio Pagani has revealed that the Utopia could have used a 1,000bhp hybrid V8 instead of the V12. In initial discussions about powerplants for the new hypercar, Mercedes-AMG suggested using the twin-turbo 4.0-litre V8 with ...


View more: Pagani says the Utopia could have been a 1,000bhp hybrid

Creditors have seized at least five luxury cars belonging to Aiden Pleterski, a self-proclaimed ‘Crypto King’ from Whitby, Ontario. Two McLarens, two BMWs, and a Lamborghini were taken from the 23-year-old, who is feeling the heat from international investors looking to recoup at least $35 million from Pleterski and ...

But a high-performance EV hasn't been green-lighted yet.

From intimate tours of Ferrari, Lamborghini, and Maserati to the grandstands of the Italian Grand Prix, it was the trip of a lifetime for our guests. Join us next year.

All 99 of these are already spoken for


View more: The Utopia is Pagani’s V12-powered vision of the future

A render of the S650 Ford Mustang Supercar In this week’s Pirtek Poll, Speedcafe.com wants to know what you think of the new Gen3 Ford Mustang that will race in Supercars next year. The highly anticipated seventh generation Mustang road car was launched last week, paving the way for ...


View more: POLL: Which Mustang Supercar do you prefer?

A roof tent is quite attention-grabbing, especially on top of a Porsche 911. If you thought owning a sports car, say a Porsche 911, meant limiting your outdoor adventures, Porsche wants to try and prove you wrong. The latest addition to Porsche’s range of accessories and products is a ...