All will be revealed on September 12. 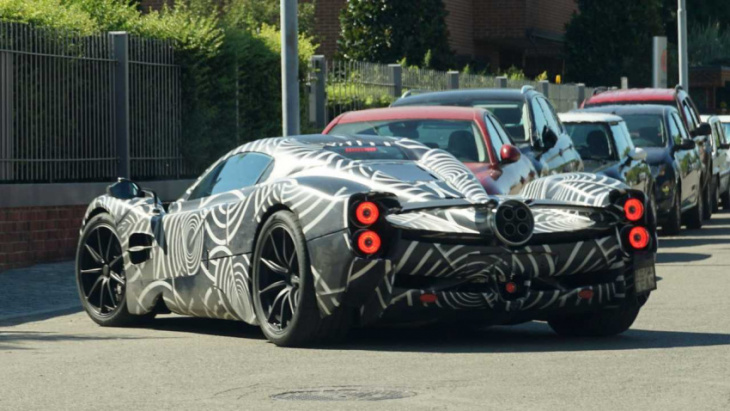 We’re on the cusp of seeing the next hypercar from Pagani. An official debut is slated for September, but we’re getting a taste of what to expect right now. Instagram user @_Tim_2712 caught a C10 prototype on the streets in Italy, and he was quick on the draw with some photos.

He graciously shared high-resolution images with Motor1.com, which we have in the photo gallery below. It’s only the second sighting we’ve had of a C10 prototype, but compared to our first look back in May, there’s much more to see this time around.

Whereas the C10’s rear engine cover was largely covered before, it’s now free of heavy camouflage. As such, we see just how low and flat the rear deck is. Pagani’s iconic quad-exhaust outlet sits almost entirely above it, capped by a thin spoiler with a slight arc that connects the taillight housings. The expanse between the arched rear fenders is broken up by the engine tunnel, which we know hides a V12 beneath it. Pagani already confirmed the 6.0-liter V12 would return, possibly making upwards of 830 horsepower.

Our view this time around is limited to the C10’s backside, but it offers a good perspective of the front wheel arches which are very pronounced amid the low, flat bodywork. We suspect not all camouflaged panels have been removed, however. The area around the large front fender vents looks suspiciously flat, as do the doors on this test vehicle. We know how Pagani loves curves in its supercars, and the official teaser from early May certainly suggests more flair along the C10’s side than what we see here.

The teaser also gave us a specific date for the C10’s reveal. September 12 is the day when all will be revealed, including the aero-focused design and the name of this all-new hypercar. C10 is the codename, but thus far, we haven’t heard even a whisper of what it might be called.

Check out more supercar news along with a special behind-the-scenes look at Monterey Car Week in the Rambling About Cars podcast, available below.

It’s for the metaverse.