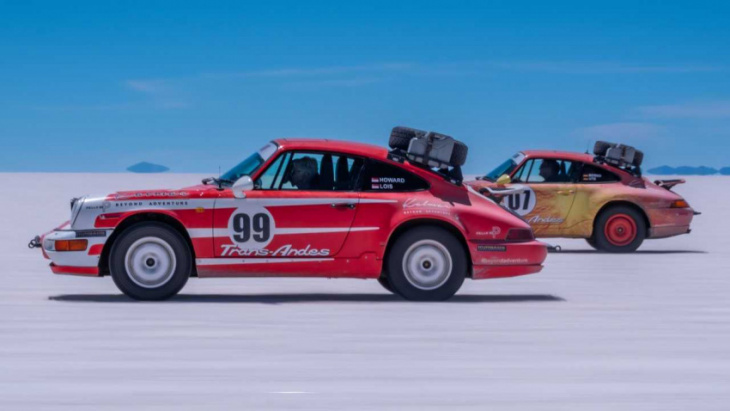 The Porsche 911 is a superb sports car, but you can unlock other possibilities. A few upgrades can turn the low-slung icon into an off-road superstar. Porsche and aftermarket tuners have been modifying the 911 this way for years. Several examples from Kalmar Automotive demonstrated their capability by completing an arduous 6,835-mile (11,000-kilometer) journey across the South American continent.

The 39-day journey started in Lima, Peru, and finished in Ushuaia, Argentina, the continent’s southern point. Throughout the trip, the cars and their crews, joined by a couple of Cayenne crossovers, experienced some of South America’s most incredible natural wonders and harshest off-road environments.

The journey took them to Machu Picchu, Lake Titicaca, the Atacama Desert, and the Uyuni Salt Flats – the world’s largest. They also drove parts of the Pan-American highway on their journey south. The trip was part of Kalmar Beyond Adventure’s Trans-Andes rally, which organized the privateer teams. It’s a sister company to Kalmar Automotive, which prepped the 964- and 993-series 911s. It also builds them for customers.

Kalmar Automotive offers several different bespoke Porsche models, including conversions for the Cayenne. The Kalmar RS and RS-R are the company’s rally-inspired cars, with the RS-R being the hotter of the two. An RS-R build starts with a 3.9-liter air-cooled flat-six engine making 345 horsepower (253 kilowatts), but tuning can increase that. The RS-R is also available with a larger 4.1-liter engine that produces over 400 hp (294 KW) and 400 pound-feet (400 Newton-meters) of torque. KA offers the car in a rear- or all-wheel-drive configuration, and it’s based on the Kalmar 7-97, a non-off-road offering.

The two off-road Porsche 911s receive several other upgrades beyond the powertrain. These include underbody protection, roll cages, improved suspension with lifted shock absorbers, unique wheels, and more. The Cayenne upgrades come in two flavors – the Kalmar CS and CS-R. KA also offers a high level of individualization with each model, allowing the client to craft their perfect Porsche 911.

BERLIN: Lose some weight, gain some fun: Every now and then Porsche builds a purist 911 according to this formula, and the new 911 Carrera T is trying to prove that you don’t have to buy an expensive GT to get this level of exhilaration. Launching in February, the ...

These eight SUVs are actually being driven.