GRID Legends – the latest in the long-running series by Codemasters – takes a much more narrative oriented approach than the previous games in the series did.

We’ve been able to get a hands-on look at the start of the ‘Driven to Glory’ story to see how it shapes up compared to other story modes we’ve seen in racing games previously.

What makes the story stand out is its presentation which the developers at Codemasters and EA admit has been heavily inspired by the Netflix Drive to Survive series. In essence, it’s a completely fictional story that masquerades as a documentary, a fact which is helped massively by the decision to have live-action cutscenes instead of CGI ones.

The decision to go with the documentary style and the live-action cutscenes helps to allow for a more engaging story since it makes the characters and the world they are set in seem much more genuine.

That said the illusion fades when the on-track action is spliced into those cutscenes since GRID Legends isn’t the most realistic game in terms of its graphics and car physics.

It’s really jarring to see the quite natural live-action shots and the video-game racing action blended together. 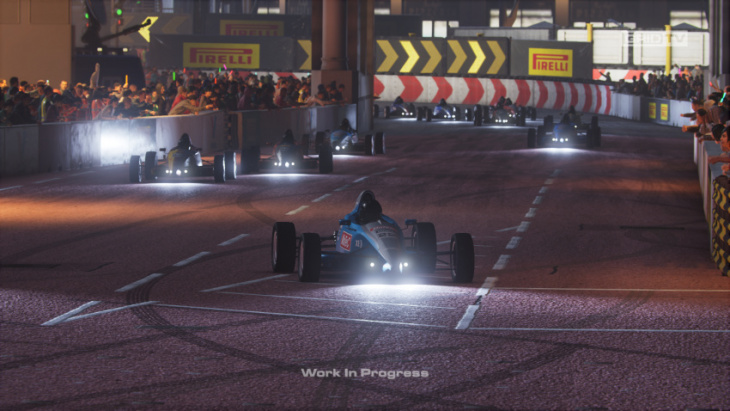 However, there are some ways that make it more promising a story mode than was seen in F1 2021 with Braking Point. Firstly there are simply more races in total with 36 which is more than double what Braking Point had. Each race is shorter so the overall gameplay time is likely to be similar for both, but more races mean there should be more character and plot developments.

Along with more races, there are also more distinct characters. In the opening six events alone you see: Marcus Ado, the team principal for Seneca Racing which is the team you drive for, your team-mate Yume Tanaka, Ajeet Singh who is the lead engineer and Valentin Manzi who is a rival driver for Voltz Racing.

Both drivers for Ravenwest, the staple arch-rival team that has been a consistent presence in the GRID games, are also briefly seen in the flash-forward opening and become more prominent in the later stages of the story.

The number of characters is a positive sign but what’s more important is how and when they appear in the cutscenes. The first few cutscenes establish who the characters are and you also see and hear from Manzi long before your rivalry with him crescendos. Not only does that flesh out the characters a bit more, but it also makes it feel like you’re not the only person who matters in the story.

That’s an improvement on F1 2021’s Braking Point, where you alternated between playing as Aiden Jackson and Casper Akkerman, as you didn’t see or hear much from the character you weren’t controlling at the time. Also the more successful of the two was always coincidentally the one you happened to be playing as. 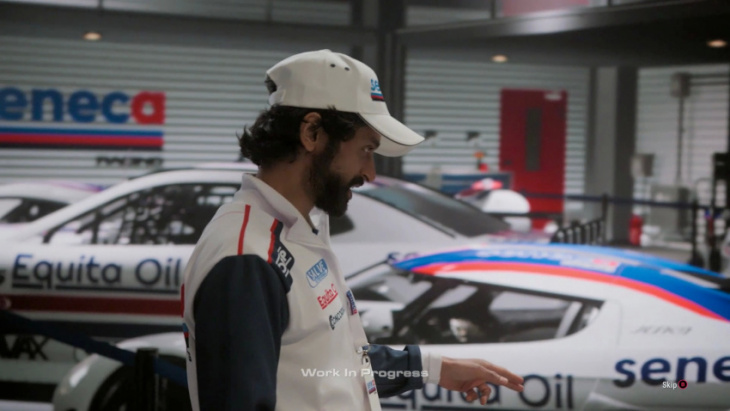 It is worth noting that the Driven to Glory story, which is the most talked-about game mode ahead of GRID Legends’ release, isn’t the only game mode and a more traditional career mode is still in the game as well.

There is a risk that the developers could’ve then tried to over-produce the on-track action in Driven to Glory given the more narrative focus of that mode. That would’ve been contradictory to what made the original game in the series so popular – that being the random events that happen around you.

Fortunately, the races do still feel like the normal, action-packed races you’ve come to expect from the GRID games. AI drivers can still randomly spin or crash or even get a puncture.

There’s also a variety in event types that exceeds anything you would see in F1 2021, but also what was available in the entirety of the previous GRID game. In the opening six races of GRID Legends’ story, there’s an elimination race, as that format of event returns from the earlier titles, and no class of car was used more than once.

Stadium trucks also make an appearance which is an entirely new category of car, and one that handles completely differently from anything in a previous GRID title due to the huge amounts of body roll when cornering. The race with them is quite a random sounding one as it’s five laps around Paris with ramps added to the circuit. 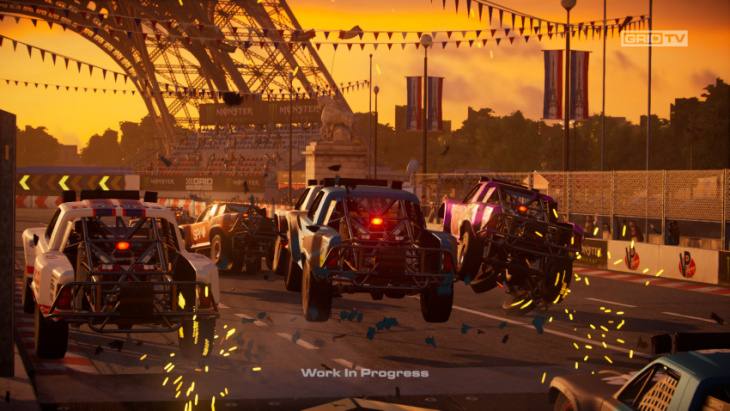 One of the main selling points outside of the story mode is the game’s race creator system which allows you to create races that are as conventional or bizarre as you like.

Driven to Glory explores both ends of the spectrum since the big, powerful and lumbering stadium trucks aren’t especially suited to the tight and twisty streets of Paris. Add in ramps to the circuit and that creates the most memorable race of the opening selection even if for no other reason than the inevitable pile-ups that happen.

That concept of a more dramatised version of motorsport is established at the very start of the story when most of the drivers are caught up in a massive series of interconnected crashes that creates a car park of LMP cars at one of the corners. It’s just after you’ve cleared those cars that you are put behind the wheel for the first time. 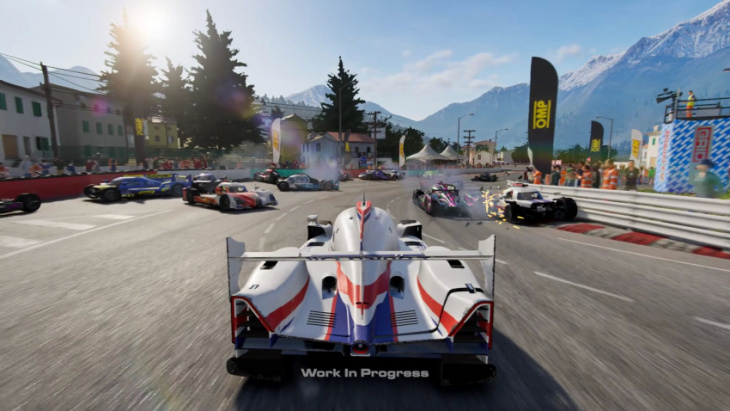 Of course, that is only the beginnings of the Driven to Glory story and ultimately how popular it proves to be is dependent on if it can keep the races interesting and the plot engaging throughout the game mode. The presentation shows a lot of promise and it looks like it will be more memorable than Braking Point was in F1 2021.

In fairness though the increased freedom that comes from GRID Legends not being a licensed product of a real-world motorsport championship was always going to make it easier to tell an exciting story.

That’s not to say it’s going to be a groundbreaking experience since Driven to Glory will still be a linear story with each event requiring you to finish above a certain position or ahead of a specific driver in order to progress to the next level.

That is apart from the test session you do with Seneca Racing where all you have to do is three laps around a circuit with no requirement on lap time or even for you to stay within the track limits.

For a first event to ease players into the game those lax requirements would make sense, but it’s the fourth one you do and the previous two were races that required you to either beat a certain driver or finish in a certain position on track to be able to move on.

Another detracting point is the fact you control a driver who is simply known as Driver 22 and is often called just 22. The rationale behind having a generic and non-descript playable character was so anyone could easily put themselves in the shoes of Driver 22 and feel a part of the story themselves. 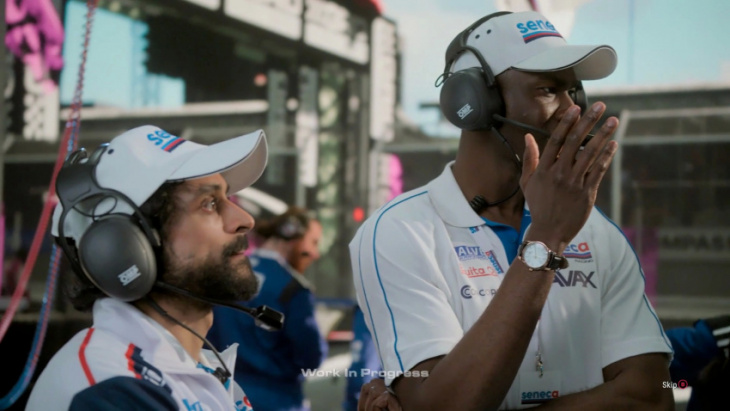 That may be true for some people, but your character’s vagueness and the fact that you’re referred to as 22 or the “new driver” is unrealistic and reminds you that it is very much a video game – shattering any sense of immersion that you’re a part of a real, living motorsport series which the cutscenes try so hard to create.

There is still the question over whether it will be good enough to win players back around after the disappointing previous entry in the GRID series. There’s also the debate over how necessary a story mode is given that the most popular game in the series is still Race Driver: GRID which doesn’t have any direct storytelling in it at all.

Until GRID Legends comes out it’s difficult to answer either of these questions with complete confidence, but certainly, Codemasters and EA have a lot riding on the Driven to Glory game mode and it will need to carry on as strongly as it starts to warrant its inclusion in the game in the first place.