Opel Corsa Facelift Spied With Tweaks At The Front

The humble hatchback will carry over without dramatic changes. 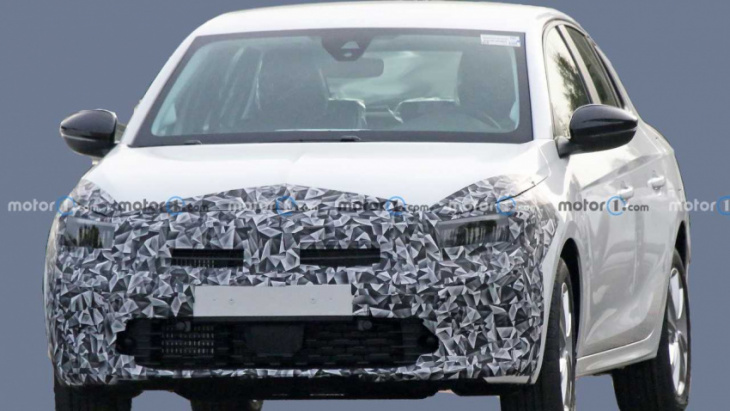 Just earlier this year, the Opel Corsa celebrated its 40th anniversary as one of the brand’s most successful models in history. While the B-segment on the European market is constantly losing its share, many automakers still find a viable business case to develop and sell new small cars. Opel seems to be one of those companies as it is now preparing a mid-cycle refresh for the fabled nameplate. What you see in the gallery below are the first spy photos with the facelifted model.

The Corsa is a relatively humble car designed to take you from point A to point B with minimal effort. This white prototype doesn’t look flashy and that’s because the Corsa has never been a fashion icon. Things won’t change with the facelift and the first spy photos indicate a minor visual revision for the hatch. There’s camouflage covering the front fascia and it could be hiding a slightly redesigned radiator grille. More importantly, there seems to be a pair of new headlights.

The amount of camouflage at the back hints at even less notable changes. The taillights appear to be unchanged compared to the current model but strangely, there’s some camo tape covering the middle area of the boot lid where the Opel logo sits. There could be other minor tweaks that are not applied to this test vehicle.

When the current generation Corsa was unveiled in the summer of 2019, the hatchback had a 1.2-liter naturally aspirated engine producing 75 horsepower (56 kW) as a base option. A turbocharged 1.2-liter mill was also available with 100 hp (75 kW) and 130 hp (97 kW). A 1.5-liter diesel with 102 hp (76 kW) and a fully electric version were also introduced. We don’t know which engine options will be carried over to the facelifted model but there could be some simplification of the range.

As mentioned above, the B-segment in Europe is shrinking, which forced Ford to announce its Fiesta will be discontinued next year and replaced by a crossover. The Corsa seems to be safe for the next few years but nothing can be confirmed for the German small car with French bones beyond the current model’s lifecycle.

Keyword: Opel Corsa Facelift Spied With Tweaks At The Front