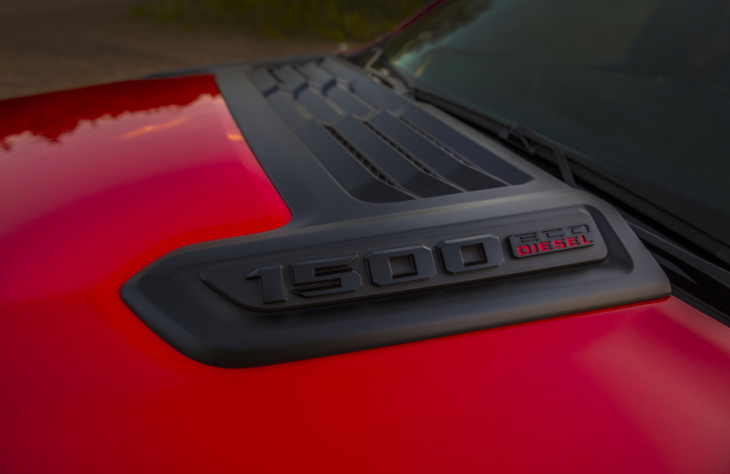 After a decade of offering small-displacement diesel engines in its Ram 1500 pickup trucks, Stellantis is ending production of the light-duty EcoDiesel powertrain this January. Driving’s contacts within the company confirmed this news affects both the Canadian and American markets.

“Our Ram EcoDiesel V6 engine has delighted consumers with the highest half-ton diesel torque rating and towing capability while being the first to exceed 1,000 miles of range,” said Mike Koval Jr., Ram brand CEO at Stellantis in a prepared statement. “As we quickly pivot toward an electrified future, we wanted to celebrate this last EcoDiesel milestone by offering our loyal light-duty diesel enthusiasts a final opportunity to order the truck they love.”

Ram introduced the EcoDiesel in its light-duty pickup back in 2014. At the time, it was good for 240 horsepower and 420 lb-ft of torque. Following a revamp about six years later, output rose to 260 ponies and 480 lb-ft of twist. Those latter figures outstripped the half-ton Power Stroke at Ford, though fall short of the recently rejigged 3.0L Duramax bound for duty in light-duty GM trucks and their SUV brethren. That mill is now good for 305 horses and nearly 500 torques.

Whether engineers at Ram decided to give up on this particular chase or simply wish to focus their efforts on electrification is up for debate. There is a finite amount of research and development money after all, even in a huge company like Stellantis, so perhaps those in charge have decided to funnel their strengths into powertrains motivated by electrons. Ram has previously announced it plans to offer a 1500 battery-electric vehicle (BEV) pickup truck in 2024, a full portfolio of electrified solutions in the majority of its segments by 2025, and in all segments by 2030.

The second-generation (post-2020) EcoDiesel was a markedly better effort than Ram’s initial kick at the light-duty oil can. Not only did it make more power but it also boasted a competitive towing capacity, a trait often cited by diesel shoppers for considering that powertrain in the first place. While the claimed maximum range of 1,000 miles (1,600 km) seems scarcely believable, it was theoretically possible in a 4×2 variant when equipped with the 125-litre fuel tank. Bladder-busting, indeed.

Production of the 2023 Ram 1500 EcoDiesel will conclude in January 2023. For now, Ram is making the EcoDiesel available in Crew Cab 4×4 models across several trims, with order books open right now.

For 1948, and carrying into 1949, Oldsmobile gave its flagship 98 Series a freshened look that drew heavily from the marque’s Futuramic styling concept. That year, Futuramic design language was applied to four 98 body types on the 125-inch wheelbase chassis, including the convertible. In period advertising, Oldsmobile promised that ...

The market that the Tesla Cybertruck would be competing in is bound to get more crowded this November, with Ram Trucks CEO Mike Koval Jr. noting that the company is looking to unveil its Ram Revolution Concept truck the night before the LA Auto Show in November. The vehicle ...


View more: 5 Best Ceramic Coating Sprays for Your Car Under $25

The Ducati Scrambler also celebrates its 60th anniversary this year The number of Scrambler Ducati bikes delivered to owners all over the world has now arrived at 100,000. The important milestone also reached precisely in the year in which the 60th anniversary of the birth of the first historic model ...

Interested students can join the Advanced Modern Apprenticeship programme upon secondary school completion Mercedes-Benz Malaysia recently signed a memorandum of understanding (MoU) with Montfort Boys Town, Shah Alam to further strengthen its education pillar and commitment through the recruitment and incubation of secondary students for its globally renowned Advanced Modern ...

Ram is 'actively and aggressively' looking at smaller trucks

What’s Going On With the Ram Dakota?

Hurry, Get the Ram 1500 EcoDiesel Before It’s Gone