Norris: Recovery in Italian GP marked ‘one of my best races in F1’ 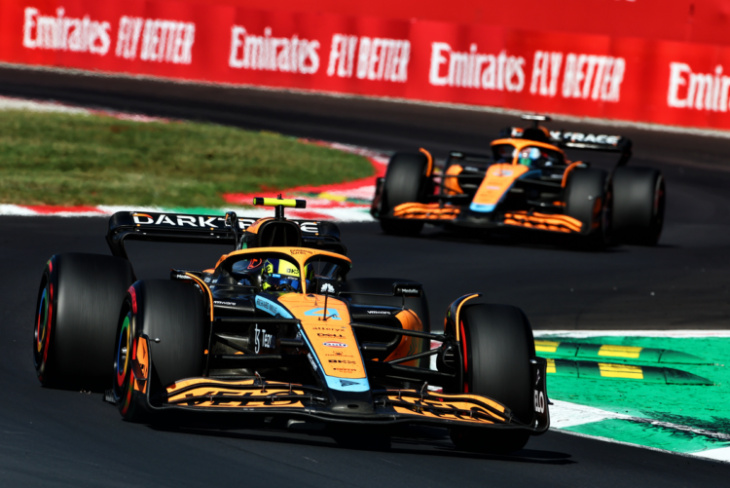 Lando Norris has described his seventh place finish in the Italian Grand Prix as one of the best races of his Formula 1 career with regards to “management and being patient with things”.

The McLaren Racing driver benefited from grid penalties to a number of cars that qualified ahead of him and started from third on the second row of the grid.

However a poor start when the lights went out saw him bog down the order into Turn 1, losing a number of positions to his rivals.

“It was an extremely poor launch because of incorrect settings, nothing I could have done differently,” Norris said, as quoted by Autosport. “And then a poor pitstop, which probably cost us the position to Lewis.

“Whether or not he would have passed me after a few laps, quite possibly, but we would have had a race and an opportunity. Maybe I could have hung on until the Safety Car.”

Starting on the medium compounds tyres, Norris extended his stint after getting caught in a DRS train behind team-mate Daniel Ricciardo and AlphaTauri’s Pierre Gasly.

The longer stint seemed to work out well for the British driver but his progress was upended due to a slow pit-stop while changing onto a fresh set of soft compound tyres for the remainder of the race.

Even with the obstacles thrown his way, Norris still remained positive about the outcome, stating: “I would say it was probably one of my best races in Formula 1 in terms of management and being patient with things.

“It was definitely my best this year but almost in Formula 1. P7 doesn’t feel like it accomplishes a lot for what I feel like I did today but that’s life. It happens, we’ll learn from it and move on.”

Norris also explained that the poor start was due to his McLaren MCL36 being in the wrong setting at the one-minute signal, meaning that mechanics were unable to enter the correct launch procedure.

“They told me and I kind of expected something poor. Of course, when the lights go out you have to react and you feel like you’ve got to get going. That’s something that’s never happened and probably will never happen again.”

Keyword: Norris: Recovery in Italian GP marked ‘one of my best races in F1’