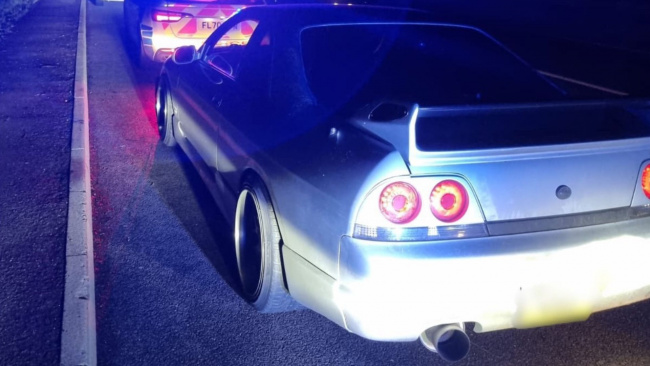 And the car kept blacking out…

An R33 Nissan Skyline driver was clocked doing up to 120 mph on a road in the UK. Making matters worse, the unmarked police unit which he blew past at over 100 mph observed the lights turning on and off. If we didn’t know better, we’d say the driver was trying to black out to lose the cops, a method we’ve seen used by quite a few Dodge Chargers on this side of the pond.

This was on an unlit stretch of a carriage road, a stretch of pavement where turning off your lights could potentially help you to disappear, although at the risk of a collision with another vehicle, especially if you’re also going 120 mph.

When he finally pulled over, the driver told police his electrical system in the car was malfunctioning, hence why the lights kept turning off and on. If that’s the case, the guy needs to get the project car back in the garage and figure that out quickly.

Project cars are a lot of fun, but if you’re going to drive at night you absolutely need to have functioning headlights, full stop. That’s the law everywhere we’re aware of, so this guy really doesn’t have an excuse. Plus, as the police pointed out in a Twitter post, malfunctioning lights doesn’t make your car go 120 mph.

Then there’s the issue of his speeding. We get it, something like an R33 is a blast to push to its upper limits, but there’s a place and a time for such activities. A public road is never the place. If these youth would work hard and find a track to play on, they wouldn’t be paying all these government fees, they could socialize with other gearheads, and they wouldn’t be risking having their car impounded or worse, seized.