A little of the R34 and modern GT-R come together to consider the future. 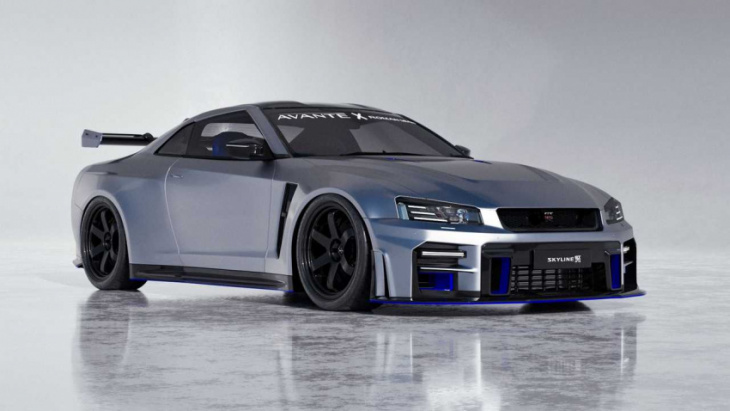 The Nissan GT-R seems to be nearing retirement, especially after its removal from the European and Australian markets. Artists Roman Miah and Avante Design imagine how the sports coupe might evolve in the future by looking into the vehicle’s past. Here’s their rendering that envisions the future R36 generation.

The front end has a strong resemblance to the boxy appearance of the R34 generation of the Skyline GT-R. The modernized styling includes horizontal strips of LEDs on the outer portion of the headlights and on the lower fascia. The upper grille is fairly narrow, but there’s a much larger inlet below it.

The hood gains a rear-facing scoop, and there are NACA ducts near the windshield. The overall shape dips down at the tip of the nose. This look is more akin to the current GT-R, rather than the flatter styling from the R34 model.

In profile, you can see the similarities to the current GT-R. The angled roofline, sharply creased shoulder line, and angular rear fender flares are from this model. There’s a subtle spoiler on the roof, and a tall wing attaches to the rear deck.

At the back, the circular taillights are a design trademark of the GT-R. In this interpretation, there’s no illumination in the center, which makes them look a little like exhaust outlets.

The current GT-R debuted for the 2009 model year in the US. Nissan gradually improved the model by increasing the power output from the 3.8-liter twin-turbo V6. The figure started at 480 horsepower and reached 600 hp in the Nismo. The limited-run GT-R50 has 710 hp.

Nissan says that another generation of the GT-R is happening, but the company isn’t indicating when that vehicle arrives. Rumors point to it either being heavily electrified or a full EV. Everything else is a mystery. There aren’t even spy shots to speculate from.

The GT-R name is a venerable name for the Nissan Skyline. The first of them arrived in 1969 using a 2.0-liter inline-six making 160 horsepower. While the nameplate wasn’t always part of the lineup, it made a splash whenever the moniker arrived again.

Dig deep all the way to the year Nissan's communication department was established.


View more: Nissan Updates News Archive, Now Goes All The Way Back To 1961

The Nissan Qashqai is one of the best-selling family SUVs, but is its popularity deserved? We're living with one to find out...