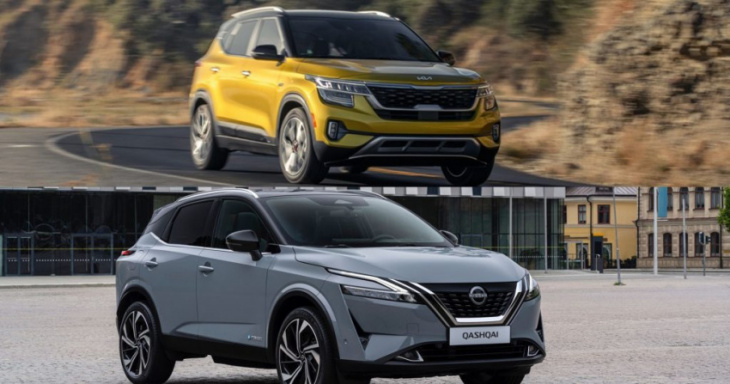 Nissan opportunely joined the compact SUV segment in 2007 with the Qashqai, a compact crossover SUV named after nomadic tribes of Iran. The Qashqai allowed the Japanese automotive powerhouse to be one pioneer in the newly created segment of small SUVs. After 15 years and over 3 million units sold, the Qashqai continues to be a benchmark but now with a plethora of competitors threaten to steal its place in this segment.

We are talking about the Korean automaker KIA, which finally fronted up the small SUV playground with their first generation Seltos in 2019. With a name taken from the son of Hercules, this subcompact crossover arrived as an exciting proposal with an attractive pack of goodies. In 2022, the Seltos still offers outstanding value for money and an engaging powertrain to butt heads with one of its major rivals like the Qashqai and see who’s in the small SUV segment.

The current generation of the Qashqai features ProPILOT electrification and semi-autonomous driving to carve out a niche for itself as the little brother of the X-Trail.

The Ariya, Nissan’s electric SUV, clearly inspired its design. However, with considerably more compact proportions, it measures 4.42 meters long. The front end receives boomerang headlamps, a sharp V-Motion grille, and vertical styling lines in the fascia. The rear keeps a more conservative style based on the same DNA of the Qashqai it replaces.

There are also essential novelties in the mechanical department, with an offer of electrified engines and without diesel. Instead, the Japanese brand has accompanied the only gasoline engine with an unprecedented e-Power hybrid propulsion system for the top trim comprising an electric motor with a traditional combustion engine (petrol). This configuration works as a generator to charge the batteries that provide energy to the electric motor, the only one in charge of only moving the vehicle.

A 1.3-liter turbocharged gasoline engine powers the rest of the range in two available outputs: 140 horsepower–available only with a 6-speed manual transmission–and 158 horsepower, with Xtronic automatic transmission and either FWD or AWD. The Nissan Qashqai has sold well since its release.

Nissan has extensively upgraded this block to include the 12V mild hybrid system. In addition, it incorporates a separate lithium battery installed under the floor and a belt-driven generator to collect braking energy, providing torque support during acceleration.

The Qashqai is based on the new CMF-C platform, shared with other models in the group, such as the Sentra, the Renault Mégane, or the Mitsubishi Outlander. This advanced architecture reduces weight while improving its rigidity, which translates into better ride quality and excellent safety for passengers.

This vehicle is rebranded for USA markets as the Nissan Rogue Sport.

For other markets like Canada, the Qashqai is available with a 2.0 inline-four engine making 141 horsepower and 147 lb.-ft. of torque. The Canadian Qashqai features Nissan Xtronic CVT® (Continuously Variable Transmission). The 1.3-liter four-cylinder gasoline engine with mild-hybrid assistance in 140 hp achieves 44.5 mpg.

Aesthetically, the Qashqai received a well-deserved restyling, which brought back the swag it had been losing as the previous generation was showing signs of aging. The new design is much more purposeful, with sharper lines that deliver a clear intention of the brand to create more futuristic silhouettes.

The new Qashqai offers a spacious interior for five passengers with a city-friendly exterior for easy maneuverability but still not as roomy or flexible as some competitors. Additionally, it has a generous boot space of 648 cu. ft. (504 L), excluding luggage boards.

According to Whatcar.com, the Nissan Qashqai has stuck with the winning combination of an elevated driving position, stylish yet reasonably rugged looks, and down-to-earth running costs while also giving buyers plenty of trims options – from entry-level Visia right up to luxurious Tekna+.

Drive.com says the new 2022 Nissan Qashqai crossover is smarter, safer, and better equipped than its predecessor.

Pros: Sophisticated design inside and out, packed with advanced technology, high level of standard safety features.

The Kia Seltos is one of the most recent models of the South Korean brand, arriving in 2019 to compete in the subcompact SUV segment. Looking from the outside, Seltos features a simple yet attractive design, with plenty of straight lines ending in the contrasting grille at the front. The Kia Seltos GT Line 2022 is a model that has set the standard within its segment for its spacious interior and great technological offer.

One of the most vital aspects of the KIA Seltos 2022 is under the hood. The GT Line version comes with a 1.4-liter turbo engine, capable of generating 138 hp and 179 lb-ft, enough to move with ease. It doesn’t struggle to maintain a good pace on the highway, nor does it need to push the engine too hard to reach highway speeds. Some turbo lag forces you to sink your foot a little more on the accelerator when starting, but it is not a delay that hinders driving.

The dual-clutch automatic transmission mitigates the effect of turbo lag. It does a great job squeezing the best performance out of the engine without affecting fuel economy too much. However, in terms of driving manners, the Kia Seltos 2022 points much more to comfort than to sportiness.

Fuel economy for the Seltos is an EPA-estimated rating of 27/31 mpg city/highway. The more powerful 175-hp, turbocharged 1.6-liter four-cylinder models have a slightly lower fuel economy rating of 25/30 mpg.

The suspension has a very soft touch, which transmits robustness when going through potholes and does not get to launch when tracing curves on the road. However, there is a marked body roll.

The 2022 Kia Seltos GT Line has a simple, spacious, and practical cabin; however, this does not mean it lacks practicality. On the contrary, the interior offers enough comfort and room for five people and a boot space of 15.3 cu. ft. (433 liters). At the same time, this version boasts a certain sporty air by integrating exclusive features such as GT Line sports bucket seats.

At the end of the day, the 2022 KIA Seltos is a pretty balanced SUV in handling. Its engine makes it agile, while the chassis pursues the comfort of an SUV geared toward family and urban mobility.

Car and Driver say the Seltos carves out a small niche and satisfies drivers with a charming chassis and a comfortable cabin.

U.S. News describes the Kia Seltos as one of the roomiest and most fuel-efficient subcompact SUVs around, and it offers decent handling, but its powertrains leave room for improvement.

Cons: Unimpressive handling, not a lot of driving aids, it doesn’t offer an electrified version.

Although the Kia Seltos has become a serious contender in the small SUV segment, it falls short regarding technology and performance and not offering a version with some level of electrification.

Still, thanks to its boxy good looks, practical proportions, hardy presentation, decent performance, ample road clearance, thoughtful equipment levels, and overall value for money, the Seltos shapes up as a handsome and likable overachiever of the small SUV set.

On the other hand, the already veteran Qashqai continues to be a benchmark in the small SUV segment. It remains one of the most compelling models in its category. The restyling that Nissan gave to the new generation Qashqai and the incorporation of a mild hybrid powertrain make it the winner of this showdown, but not by much difference.

Competition in the compact SUV segment is getting more exciting and fiercer; year after year, we see models that threaten the throne of the forerunner of the segment.


View more: Here’s How Much a 2023 Kia Soul EX Costs With Every Available Option

Nissan and Mitsubishi Motors share the 2022-2023 Japan Car of the Year (JCOTY) award with the Nissan Sakura/Mitsubishi eK X EV being awarded the title this year. Besides being the second consecutive year for Nissan, this is the sixth time that a model of the brand has won the ...