Tougher: The new Nissan Pathfinder is designed to appeal more broadly than its predecessor, providing a best-of-both-worlds solution to those requiring a more capable but still urban-friendly SUV.

NISSAN claims the fifth-generation Pathfinder large three-row family SUV it launched its in Australia this month,was intentionally reinvented to plug the gap between more hardcore diesel-powered and body-on-frame 4×4 models like the Ford Everest, and bitumen-biased seven-seaters like the Toyota Kluger.

While the vehicle in its current form will sit nicely between softer and harder competitors within the large SUV category, the opportunity to offer a more dedicated off-road option was never far from Nissan’s thinking.

Speaking to media gathered for the launch of the Nissan Pathfinder in Victoria this week, Nissan Australia senior marketing manager Martin Longayroux said research proved the previous generation Pathfinder had strayed too far from its rugged roots.

“There was a lot of customer feedback, particularly out of the US where the car is from, that said buyers wanted to capture what they call the ‘cool Dad’ car, something they could drive the kids around in, but was still capable and that actually looks like a car they want to drive,” he explained.

“So, yes, it was 100 per cent intentional that the move to become more capable was one the car needed to take.”

The Pathfinder could even be adapted to head further off the beaten track as Mr Longayroux said there was a possibility the Warrior program offered on the Navara ute and soon the Patrol upper-large 4×4 could be applied to Pathfinder down the track.

“That’s obviously something we could maybe look at once we’ve launched the current car, but it will depend on whether there is an opportunity for that sort of lifestyle, and if that’s what the market is looking for,” he said.

“We’re always looking at opportunities for the future.”

As for the competitor set Pathfinder now challenges, Mr Longayroux said the model will appeal more broadly than its admittedly ‘soft’ predecessor, providing a best-of-both-worlds solution to those requiring a more capable vehicle that retains the attributes required for daily urban duties.

“It’s definitely still a rival to the likes of the Toyota Kluger and the Mazda CX-9, and also the new Hyundai Palisade. But with the improvement in the looks and the more rugged capabilities, we’ll hopefully also attract some of that market from the diesel, real four-wheel-drive operators,” he said.

“For those that don’t want to go seriously off-road, but who want that little bit more from their SUV, we think the new Pathfinder will offer the perfect option below vehicles like the Toyota LandCruiser Prado and Ford Everest. It’s a great option for those who want a little extra capability.

“The communication and messaging for the new Pathfinder is that it’s targeted at the adventurous family.”

The petrol-only Pathfinder arrives with seven- or eight-seat configurations, seven drive modes – including those for off-roading – and an underslung space-saver spare wheel that seems a compromise given the model’s tilt at weekend adventures.

It also features a new tow mode, and up to 2700kg of braked towing capability that Nissan says places the new Pathfinder perfectly between low capacity urban-focused SUVs and more rugged ute-based rivals.

The new Nissan Pathfinder goes on sale in Australia from this month with a four-variant range offered in two- and all-wheel drive configurations and with the choice of seven or eight seats. It is priced from $54,190 plus on-road costs in ST form, with the top-tier Pathfinder Ti-L starting at $77,890 plus ORCs. 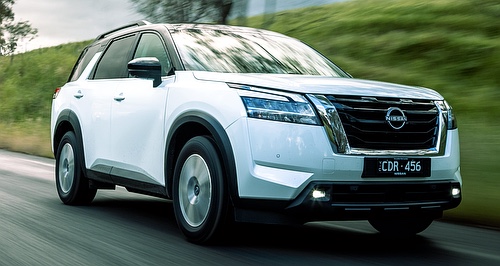