The car carrier was parked with the ramp down under a streetlight and with hazard lights on. 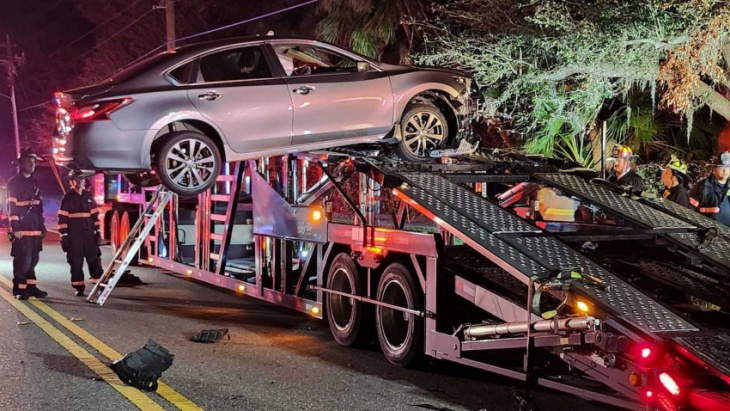 Have you ever seen a car carrier with its ramp down and thought about driving on it just like in the movies? Well, some of us (if not most) do but I can guarantee you that only a handful has actually done it – just like this Nissan Maxima driver from an incident in Venice, Florida.

In a Facebook post by Venice FL Fire Rescue, a Nissan Maxima was seen near the top of a car carrier, dangerously positioned with its rear hanging on the sides. According to the fire department, the sedan drove up the ramp while traveling south on Pinebrook Rd.

The Venice Fire Rescue received a call at around 10:30 p.m. on Wednesday for an accident near the intersection of Pinebrook Rd. and Pinebrook. When the rescuers arrived at the scene, they found a middle-aged male in the driver’s seat. It wasn’t clear whether the climb onto the ramp was intentional or if this was a case of distracted driving. The Maxima’s speed when the accident happened wasn’t disclosed as well.

Of note, the car carrier was said to be dropping off a vehicle to a nearby resident when the accident occurred. It was parked with its ramp down but under a streetlight and with hazard lights on.

The driver was turned over to the police after extraction and cited for careless driving.

Nissan leans into futurism with this all-electric concept convertible.