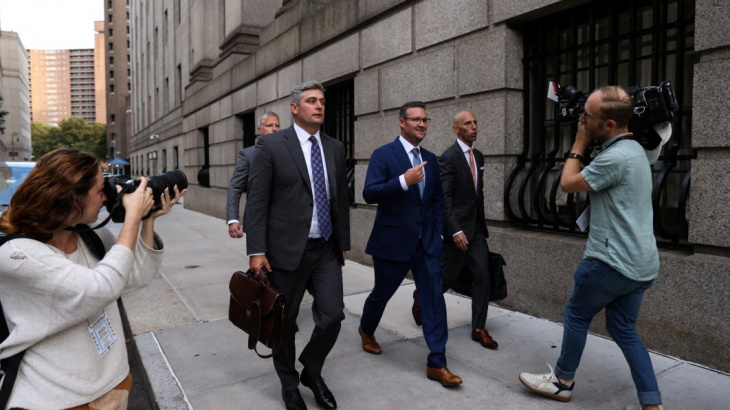 Trevor Milton sold investors on the idea his company was building the truck of the future. Now, he’ll have to persuade a jury his alleged lies weren’t material.

Two years after he abruptly resigned from the board of Nikola Corp. — the company he started — Milton is set to go on trial in New York on securities fraud and wire fraud charges, facing a maximum prison term of 25 years if convicted of the most serious charge.

Milton, 40, who founded Nikola in 2014, built the startup into a company that in June of 2020 was valued at $34 billion, more than Ford Motor Co. at one point. The meteoric rise — despite having no revenue at the time — was buoyed by investors in the height of the SPAC craze seeking the next Tesla Inc.

“The Milton trial involves the application of a traditional securities and wire fraud theory — alleging that the defendant made misrepresentations to the investing public to induce investments — to a novel factual backdrop: a de-SPAC transaction,” said Edward Imperatore, a lawyer at Morrison Foerster and a former federal securities fraud prosecutor in New York.

Along with meme stocks and cryptocurrencies, SPACs were a hallmark of the stimulus-fueled pandemic market that has sputtered out in 2022 as the Federal Reserve rapidly tightens monetary policy to cool off soaring inflation. Increasing scrutiny from US regulators has also deflated the blank-check mania.

US prosecutors plan to argue that the Utah man induced retail investors to buy Nikola shares by making false statements about the company’s products and capabilities. Milton’s lawyers will likely make one focus of his defense the advice he relied on from the company’s lawyers and executives, saying that’s what determined what he told shareholders and he had no intent to defraud anyone.

“They shared responsibility with Mr. Milton for the accuracy of the investor communications,” Kenneth Caruso, a lawyer for Milton, said at a pretrial conference last week.

US District Judge Edgardo Ramos last week denied Milton’s request to use in the trial advice that Nikola General Counsel Britton Worthen gave other employees, which was intended to bolster his defense. But he will be able to use communications between himself and Worthen to rebut prosecutors’ claims that he made public statements he knew were false.

Milton’s attorneys have pointed to evidence to support that argument, including a series of emails between Nikola executives and the founder about a podcast in which he allegedly misled investors  — which they say show his statements were approved by the company’s legal team.

The Phoenix-based Nikola kickstarted the SPAC trend among electric-vehicle makers in June 2020, three months before Milton stepped down as chairman, by combining with the blank-check acquisition vehicle VectoIQ.

Milton’s resignation followed a report from short seller Hindenburg Research that claimed Nikola deceived investors by making non-working products appear fully functional and staging misleading videos. Nikola shares plummeted on the report, which also spurred probes by the US Department of Justice and the Securities and Exchange Commission. Nikola shares closed at $5.42 Friday, valuing the company at $2.3 billion.

Milton called the report a “hit job,” and Nikola pushed back on Hindenburg’s allegations that it had overstated the capabilities of some of its earliest test trucks, saying the report underestimated its ability to produce hydrogen for its fuel-cell-powered trucks. Milton resigned saying the “focus should be on the company.”

Even if prosecutors can convince jurors that Milton lied to shareholders, to show he committed securities fraud they will also have to prove that the misrepresentations were material to a reasonable investor, or central to their decision to invest.

Nikola sees itself as a leader in clean-energy heavy vehicles in a high-potential field for zero emissions trucks that includes other aspirants such as Tesla Inc. and legacy players like Volvo AB. The company built 50 battery-electric semis in the second quarter, delivering 48 to dealers and missing its own forecast.

The trial before Ramos began Monday with lawyers spending almost the full day picking a jury. Opening arguments are scheduled for Tuesday. The trial is expected to last four to five weeks and is to feature testimony from experts from both sides as well as Nikola employees, including engineers who worked on prototypes, and company shareholders. At least two jurors were excused from the pool on Monday after they said they owned Nikola stock.

Milton’s relationship with the company he founded has been strained since he stepped down. They have fought over whether documents are privileged and Milton — Nikola’s largest shareholder, with more than 12% of the stock — opposed a company measure this year to issue new shares. The measure was approved by shareholders.

Nikola started making payments on a $125 million civil settlement with the Securities and Exchange Commission in February. The company has said it will seek reimbursement from Milton for those costs, even though it continues to cover his legal fees.

The case is US v Milton, 21-cr-478, US District Court, Southern District of New York (Manhattan.)